Rio minus twenty: Too little, too late 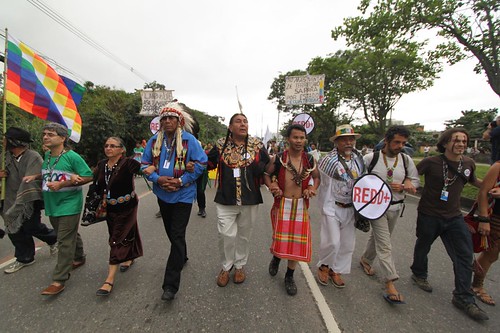 It's been twenty years since the first Earth Summit. That's nearly 500 months, or over 7,000 days. Yet, during all that time, state governments around the world have nearly completely neglected their responsibilities to the natural world, and it's starting to show.

Almost to highlight the point directly, a heat wave hit North America just as the Rio+20 summit was taking place. Global climate change is being felt just about everywhere, challenging humans and other species' ability to adapt. Species are going extinct at a rate never before observed. These issues were all the impetus to the first Rio Earth Summit in 1992, where world leaders pledged to resolve these crises to avoid environmental collapse. Twenty years later, they returned, with full knowledge that the problems were worse than ever, and seemingly without any grand intentions to resolve the situation. 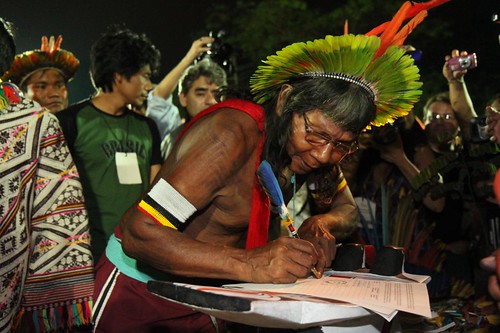 A Kayapo leader signs on to the Kari-Oca Declaration.

Of course, if you listened to many of the countries who were present, they came up with a credible plan to avert ecological disaster. Their plan contains a few measures, including plans to develop a set of "Sustainable Development Goals", modeled on the Millennium Development Goals, as well as general goals of improving environmental management, and advocating for a so-called 'green economy'. 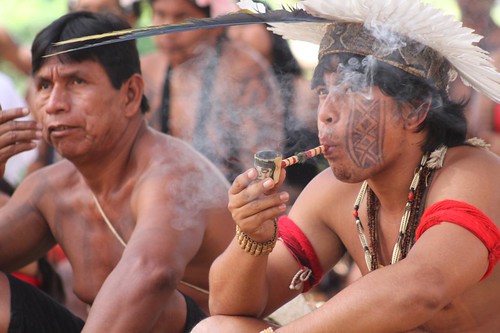 Indigenous Amazonians share a pipe during the Kari-Oca summit.

Instead, civil society groups announced their intention to work more closely together, to move forward on various proposals developed in a series of alternative conferences. Many groups took part in the People's Summit, in addition to two separate conferences organized by Indigenous Peoples. The biggest of these, the Kari-Oca Gathering, was organized by Indigenous groups in Brazil with an open invitation to Indigenous participants from everywhere.

Those who attended the Kari-Oca gathering put together a scathing declaration, indicative of the general disdain held by many civil-society groups towards the direction the UN is seen to be moving. In the declaration, the group rails against the 'green economy' proposal as another tool to expand capitalism and globalization to Indigenous communities, and as a code-word for the further destruction of ecosystems and biodiversity over the world.

Instead, Indigenous groups urge people to transform production and consumption based on human needs, to build sustainable communities founded on traditional knowledge, and to empower Indigenous Peoples worldwide to protect and manage their traditional lands and territories, as is dictated by the UN Declaration on the Rights of Indigenous Peoples. 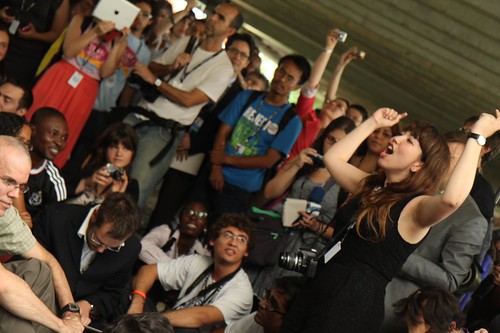 At the official UN summit, Canada was up to its usual bag of tricks. While some countries cathme to the meeting with genuine intentions of achieving some progress, Canada continued its same bag of tricks from the UN Framework Convention on Climate Change, where for years they have been blocking significant progress on a new climate treaty, going so far as to drop out of the Kyoto Protocol last year. At the summit, Canada joined with Venezuela to stop any attempts to limit the amount of subsidies going to fossil fuel companies - a significant cause of not just global warming, but impacts on frontline communities around the world. Canada also joined with other nations to actually block attempts to protect oceans that are outside of national jurisdiction.

Canadian civil society groups were direct in their denouncement of the dearth of action, ripping up the negotiated text the second day of the meetings. "We were promised leaps and bounds, but this agreement barely moves us forward by inches," Cam Fenton of the Canadian Youth Climate Coalition yelled to a crowd of youth who staged a sit-in at the UN talks.

"What are we going to leave for future generations? There'll be no environment left without change. It needs to come not tomorrow, but today," declared Ta'Kaiya Blaney, an eleven-year old from the Sliammon First Nation in BC, after ripping up the document at the sit-in. Ta'Kaiya was in Rio as part of the Indigenous Environmental Network delegation to speak out on the impact of the tar sands and Enbridge pipelines coming through BC. 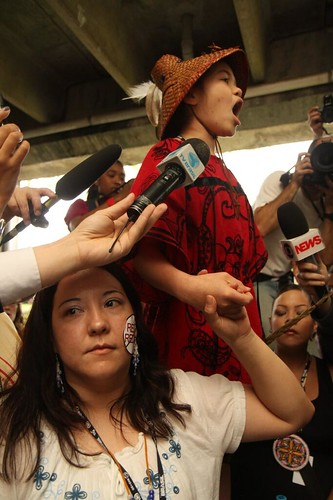 The same day, a few hundred Indigenous groups marched to the UN summit site, fully decked in their traditional dress and paint from the Amazon. They were there to deliver the Kari-Oca Declaration, which they were eventually able to do, under heavy military surveillance, as helicopters hovered overhead, and armoured personnel carriers sat by idly. The document was received by a minister from the Brazilian government, and an official of the UN, despite the final negotiation text having already been signed. Indigenous groups were disappointed that the final text neglected to include any protections for Indigenous rights or culture as part of its main principals.

"Our people's cultural world view is that humanity must be in harmony with mother nature. We should treat nature as a source of living, not extraction. The multiple crises that the world is facing today - economic, social, political and climactic - we, indigenous people, have much to offer in terms of solutions," offered Windel Bolinget, of the Cordillera People's Alliance from the Philippines.

In the end, many observers left with feelings of frustration, but also some hope. For their lack of progress, the talks managed to bring together thousands of representatives of civil society and social movements from across the globe, and by the end emboldened many of them to link their fights and continue their struggles even stronger back at home. It has become much clearer over the past years - under the Harper government in particular, and with the state of international relations generally - that the United Nations was not the place to look for solutions to trickle-down from the top, but that the solutions to the plethora of environmental issues and injustices would have to boil-up from the grassroots. 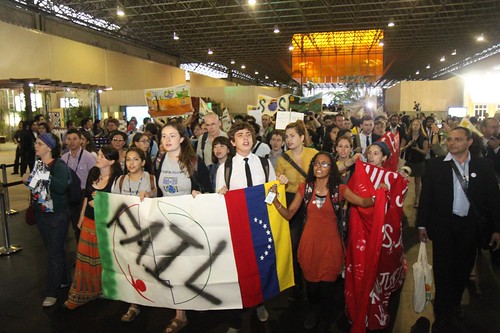 Youth stage a walk-out before the final day of talks.