On the ground in Guatemala, where government inaction has worsened a natural disaster

Whenever I get the chance to tell someone about the incredible country that is Guatemala, I never fail to mention how beautiful it is. Verdant fields, forests, mountains and volcanoes fill your bus window as you cross the country. Sprawling ceiba trees dominate the landscapes of Central Guatemala, while the north is an impenetrable system of dense jungle and Mayan sites. 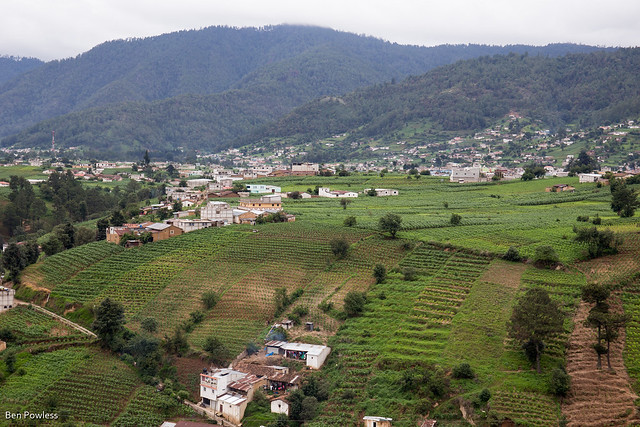 But you can never not bring up the sadness. For this is a country that has experienced more than its fair share of tragedy. A CIA coup overthrew the government in 1954. This led directly to a genocidal "civil war" waged by the military against a largely Mayan rural population, which would leave 200,000 dead from the 1960s through to 1996.

That history of tragedy was only deepened this past Sunday, June 3, as the long-active volcano Fuego (Fire) burst to life, emitting a mix of lava, ash and gas clouds, and a pyroclastic flow consisting of an incredibly hot flow of rocks as big as boulders, gas, and ash -- all travelling at speeds up to 80km/h. 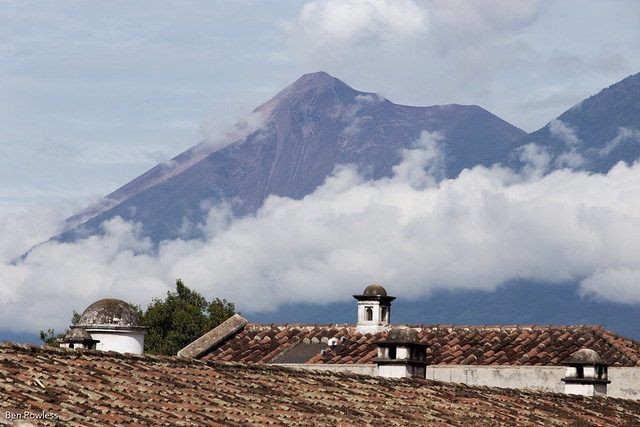 Volcan de Fuego towering over the city of Antigua

As of Friday, the death toll stands at 109, every day increasing by the amount of bodies that are recovered from the ashen debris. That number is likely to increase substantially.

Jose Hernandez, director of the 55th Company of the Voluntary Bomberos (in Latin America, akin to firefighters, paramedics, and rescue workers in one) in Alotenango, told us that he expects that there are hundreds more likely to be found. Others have speculated that the number of missing may be well over 1,000. Currently, many areas of ground zero are still too hot for the bomberos to enter. The government suspended search efforts at least temporarily Thursday, sending many individuals to search for loved ones without proper tools or training. 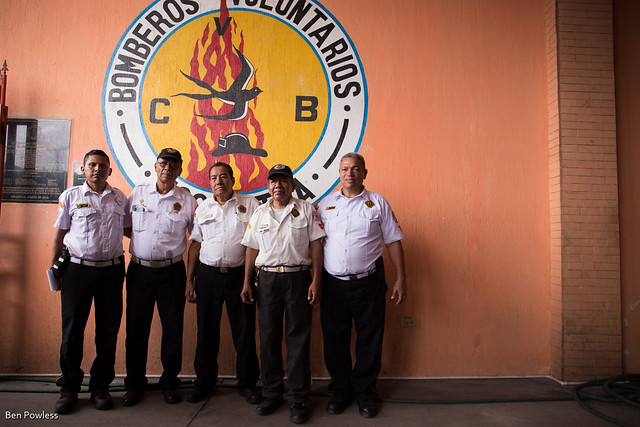 Members of the 14th Company of Voluntary Bomberos, Escuintla

Many began asking questions about the responsibility of the government in contributing to these tragedies, an unfortunately unsurprising development for a regime known for its levels of corruption and impunity (their congress chose Friday to push through laws forgiving genocidal crimes).

It became known recently that Guatemala ignored warnings starting at 6:00 a.m. on Sunday from its own institute of seismology and volcanology (Insivumeh) noting that pyroclastic flows were beginning. More warnings were issued at 7:15 a.m. and at 10:05 a.m. The government told people on social media there was no need to evacuate. By 11:30 a.m., a local hotel had evacuated according to its own safety protocols.

By 1:45 p.m., the volcano erupted. Insivumeh issued another warning, urging the government to consider evacuating. It wouldn't be until 3 p.m. that CONRED, the government’s emergency agency, would issue evacuation recommendations online. Still, they would defend their decision that evacuation wasn't necessary until a press conference later that night. 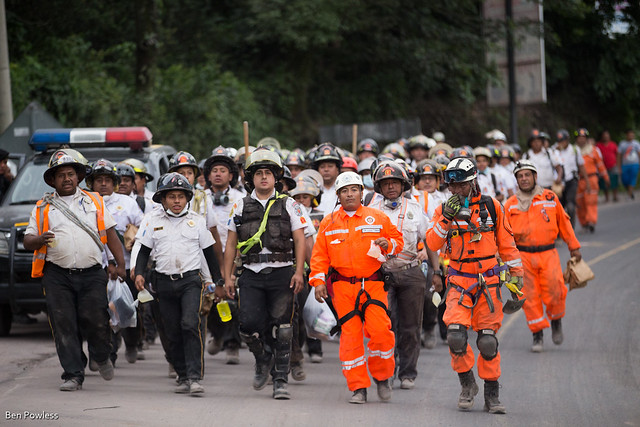 Lastly, there is a palpable concern that the emergency response has essentially been handed to the military, which has a damning history of human rights abuses. Guatemala’s emergency agency is headed by the Minister of Defence. On Wednesday, the government announced the military would handle all donations and humanitarian aid.

I had originally arrived in Guatemala for holidays on June 1 from Honduras, where I had been covering the issues of political prisoners. On June 3, I was on the shores of Lake Atitlan, approximately 20km from Fuego, when we heard a loud boom, something like a cannon, echoing through the sky. We looked around, thinking maybe it was a large firework, not uncommon in Central America. Hours later, we learned via social media that what we had heard would turn into the worst volcanic disaster since a 1902 eruption killed an estimated 6,000.

By that night, it became clear that the volcanic situation was much worse than anyone thought. Videos emerged on social media of massive pyroclastic clouds swallowing up bridges and villages. Families emerging from ground zero, covered in ash. Immediately, lists of emergency needs popped up for emergency shelters.

Talking with activists and journalists from the Red Tz’ikin, Prensa Comunitaria (Community Press), and Festivales Solidarios (Solidarity Festivals), we launched a crowdfunding campaign online, hoping to raise a few hundred dollars to buy some immediate items to ship to evacuees. By the morning, we had managed to raise some $5,000. To date, the campaign has received over $80,000. It became clear we would need to have a more informed strategy about how to determine the needs and how to supply them. 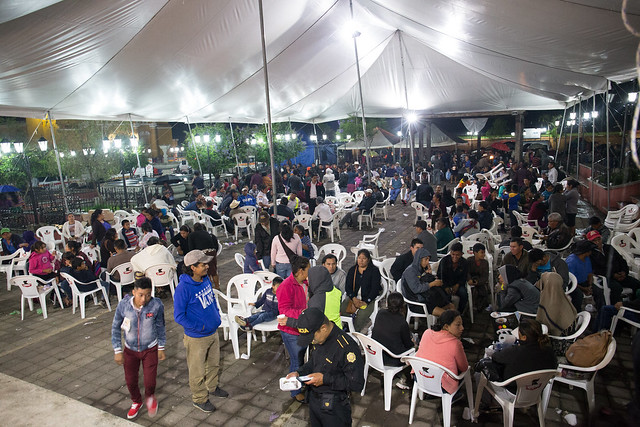 Evacuees enjoy food and each others' company in Alotenango

By Monday, we decided to try and visit some of the shelters as well as rescue centres to find out what they needed directly. That night, we made it to Alotenango, the closest town remaining on the eastern side of Fuego. While we weren’t allowed inside, we talked to Luis Estrada, the municipal supervisor who was overseeing the shelter.

He told us that already, within 24 hours, the shelter had received an overwhelming amount of donations for food and clothes, but they were still missing personal hygiene items and medical items. His worry was that in a few weeks, they would run out of items as the tragedy faded from the news. 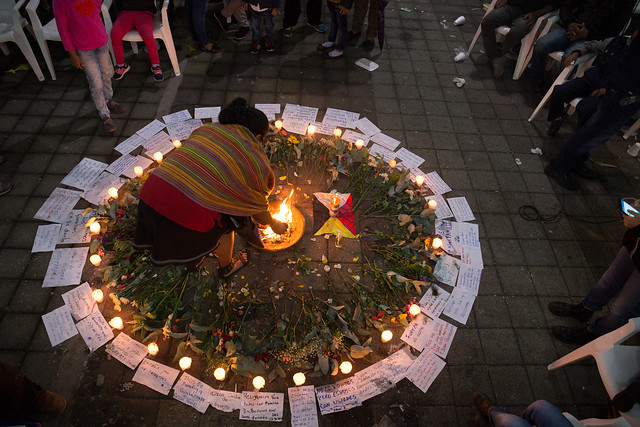 That’s also where we met up with Jose Hernandez, director of the local bomberos, as well as the group's spokesperson, Mario Cruz. They told us of their two colleagues who had gone missing the day before, Juan Baxac Luis and Jose Antonio Castillo, joining hundreds of others. Troublingly, they also confessed that they were lacking adequate tools to do their jobs correctly, including boots made to resist heat, as well as a tractor.

The main highway through the area had been hit by the volcano, so we were forced to take a massive detour the next day. Our first stop on Tuesday was a shelter in the town of Palin that was being administered by Indigenous organizations who didn’t want the government to be in control of supporting the evacuees -- a common refrain from people who held little trust in their government. 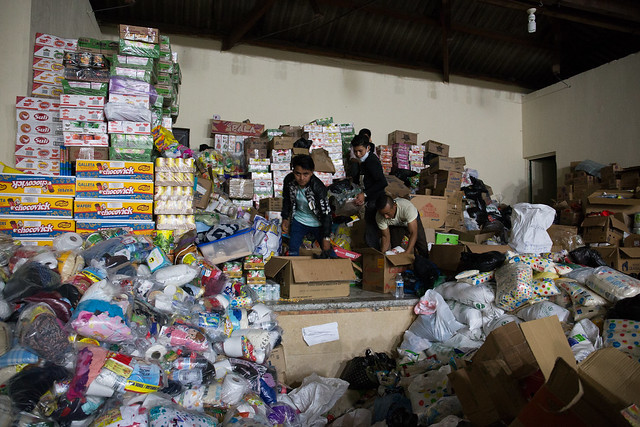 Volunteers help to organize items at a donation centre in Alotenango

In Palin, we talked to Giovani Alvarado, who was overseeing a shelter in town and one nearby, totalling a few hundred people from the community of La Trinidad. Thankfully, the community avoided destruction and death, but still remained in danger of future eruptions. While we were there, five large cargo trucks arrived filled with food, water, clothes and hygienic items from the town of Totonicapan, about six hours away. Dozens formed human chains to unload the trucks, which would hopefully provide supplies for a few weeks.

We also made it that day to Escuintla, where most of the evacuees had arrived. There we talked to Abel Vasquez, director of the 14th Company of Voluntary Bomberos of Escuintla. He was even more upfront about their needs, saying that their corps needed oxygen tanks and masks, boots, flashlights, stretchers, splints, tires and an extra ambulance. 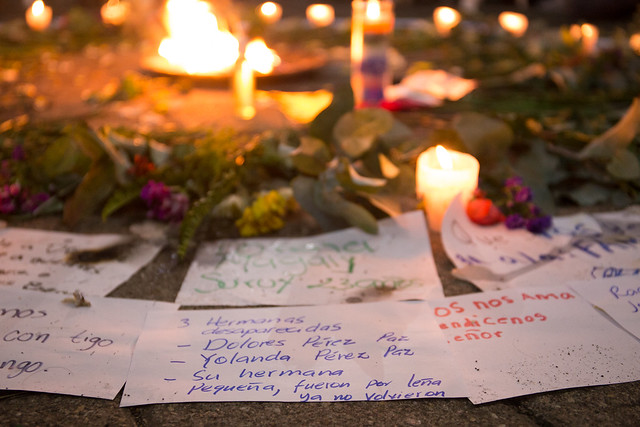 Some of the names of the missing or deceased in Alotenango

As the light began to fade, we met up with some local photographers who wanted to visit ground zero (which is known as zone zero here). When we got there, we saw the president's helicopter, and saw his motorcade leaving just as we arrived. The bomberos were also finishing their shift for the day, singing a solemn hymn as they approached the caution tape marking the edge of zone zero. Quickly, volunteers fell upon them, plying them with food and drinks which they happily consumed.

Eventually we were able to make it into zone zero, where we proceeded a few hundred meters up the mountain towards the active search area. It was like walking past a large ghost town, houses and fields covered in a layer of grey ash. Rain began to fall, which put everyone on the hill at risk of superheated mudslides. As we saw soldiers and remaining rescue workers scramble to get back to safety, we gratefully accepted a ride in a military pickup truck back to safety.

As we wait for the funds raised to be transferred to local bank accounts, we’re continuing to follow up with rescue workers, with those who were evacuated, and trying to make contact with medical professionals. What remains clear is that there will be needs to support those who lost family members and homes well into the future.

At the same time, the sheer scale of the calamity seems far beyond Guatemala's ability to respond. There will doubtless need to be a coordinated international response, but many Guatemalans in Guatemala and donating from outside have made clear their lack of faith that money donated to the government will actually go towards volcano victims. It would be worth countries like Canada to pursue relationships with NGOs and those affected to provide more direct support. 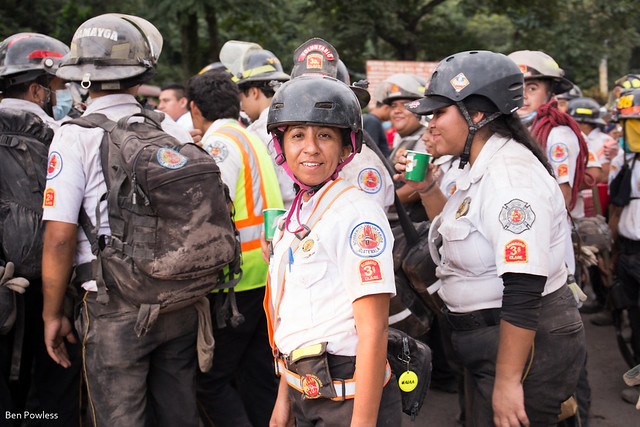