In 2012, the Nova Scotia government announced an un-legislated moratorium on hydraulic fracturing. The moratorium was put in place as a learning period -- to research this controversial method of natural gas extraction. This past spring in Nova Scotia, that moratorium was set to expire.

Over seven years ago test fracking was undertaken in Noel, a small town in Nova Scotia's Annapolis Valley. Since that time it has become the most pointed-to local example of the risks fracking promises. Triangle Resources wiped its hands clean of the sites they operated on and toxic holding ponds filled with chemical-laden waste water still sit there today.

The tailings ponds pictured here are just a few kilometers from my friend Rachael's home in Noel, Nova Scotia. She told me that after a particularly heavy rain event, water pooled on the tarp covering the pond causing the toxic contents underneath to slosh up over the sides of the pond and seep into the ground. She says that her family and their neighbours live in fear that their well water is being poisoned.

Sounds criminal, right? It's not.

This summer, while the expert panel was compiling research and reporting findings, people across Nova Scotia started talking. And when the announcement came of the public meetings that were planned in 11 towns across the province, people started organizing.

No one predicted the mobilization that happened during those three weeks in July. Nearly 2,000 people -- mothers, farmers, nurses, youth, Mi'kmaq, elders, scientists -- took extraordinary action to defend the people and places they love. Armed with love and emotion, people stepped up.

At the public meeting in Noel, the voices in the crowd were especially strong. Sam, a resident of the area, stated that he felt like this process was just an arm's length approval process for the petroleum industry. Any why should people feel any different? The government welcomed Triangle in and has allowed them to operate with impunity. They treated peoples' lives in Noel as if they are inconsequential. During this meeting, Rachael urged the panel chair, Dr. David Wheeler, to bring the voices of her community forward. "We live here. We're scared. We're hoping and praying that you'll stand up for us," she pleaded.

Thousands of ordinary people like Sam and Rachael made a huge impact on the trajectory of this province, and created a ripple effect throughout the Atlantic region. Within days of the panel's report being submitted to the government, an announcement was made that legislation would be introduced to ban high-volume hydraulic fracturing. That would not have happened without people across the province banding together and making their voices heard.

During the public meeting in Halifax last July, one local stated, "There are people in this room who will not let fracking happen again. They will fight tooth and nail."

He was so right.

Just six weeks ago, Rachael and I were among 55 people who took a bus from Halifax to the People's Climate March in New York City. 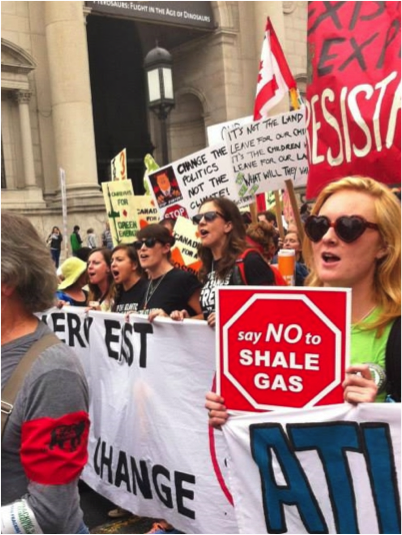 While I still haven't quite digested all of the emotions and thoughts that I experienced during those days, there is a feeling I felt that I will never forget.

A moment of silence marked the start of the march. It was to honour the enormous human toll that climate injustice has already wreaked. 400,000 strong and you could hear a pin drop in that crowd. I thought of my friend during that moment, and the words "we haven't won" played over and over in my head. It felt so damn good to get that small victory in Nova Scotia; to feel like we were heard by the people who are supposed to represent us. But people in Noel, and those who live in frontline communities across the country and across the planet are still being poisoned, manipulated, and treated like trash. When the "moment of alarm" took over the crowd and broke the silence at the People's Climate March with shouting, cheers, and boots stomping the ground, I screamed with every bit of myself. I screamed for her, and for everyone else on the front lines, continuously being ignored, trampled upon, and left to clean up a mess that isn't theirs.

So, where do we go from here?

We stand together and we demand better and we don't stop until we find justice. Because how can we? What is the alternative? The way I see it, there isn't one. And so I'll continue to show up, wherever I need to, in whatever way I need to, to demand the change we need.