B.C. Liberal government about to be toppled like a House of Cards | rabble.ca

B.C. Liberal government about to be toppled like a House of Cards

For months here in B.C., and with the May 14 election now fast approaching, I've been waiting for the mainstream media to switch into attack mode on the frontrunning NDP, but it appears that's not going to happen.

Premier Christy Clark just has too many knives in her back. Old Gordon Campbell government stalwarts from the early years of B.C. Liberal rule are coming out of the woodwork to bash her as incompetent and/or corrupt, some even urging her to resign. Once and future aspiring leaders of the right-wing in B.C. appear more than happy to take their distance and let Clark lose this election.

I'll be sharing my bi-weekly columns on B.C. politics -- originally written for the The Source newspaper in Vancouver -- here at least through the May vote. It won't all be schadenfreude, I promise. Much as progressives will take pleasure from the final implosion of this regressive government, there will be many political battles in the years ahead. The NDP government-in-waiting is promising precious little. The Liberals, I'm afraid, will prove much easier to topple than neoliberalism.

I recently watched the much-hyped new Netflix TV series House of Cards. A big budget remake of an earlier BBC program, it’s a political drama set in the cutthroat world of Washington, D.C., starring Kevin Spacey as Francis Underwood, a sociopathic politician scheming his way to the top.

The whole House of Cards cast of characters is pretty unseemly. Underwood's wife Claire, equally driven and ruthless, runs an NGO compromised by the needs of her politician-spouse and her corporate funders. There's a young, ambitious journalist who allows herself to become a stenographer and Tweeter for Underwood. Democrats are, with a few exceptions, indistinguishable from Republicans. Corporate lobbyists stalk the halls of Congress, a menacing reminder of who really pulls the strings.

Basically everyone in this house of cards is Machiavellian in their motivations -- power and money trump any and all ideas and principles. There is almost no discussion of policy or ideological differences at all.

It makes sense that a show like this would be popular right now, tapping into a deep skepticism about politicians and politics. A look at our provincial politics gives you an idea of where this attitude comes from. 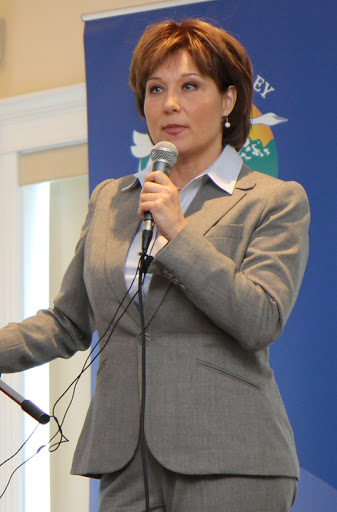 B.C.'s answer to Francis Underwood? (Photo by BC Government / flickr)

For Christy Clark and the B.C. Liberals, it's all coming down like a house of cards. After 12 years in power, the governing party is about to fall.

With just over two months until the fixed election date, things have gotten so bad that many Liberal insiders and even MLAs and cabinet ministers appear to be seriously considering ditching Clark before the May 14 election. How did it come to this?

The immediate cause is a scandal that exposes the cynicism at the heart of this provincial government. A 17-page document entitled "Multicultural Outreach Strategic Plan" was leaked to the public, revealing the Liberals were effectively using government time and money to devise plans to win over the "ethnic vote." The outreach paper shows the Liberals thought they could score “easy wins” with Chinese and South Asian voters by referencing historical injustices, and that they planned to collect contact info to create "ethnic lists" and identify "validators" in various ethnic communities.

There's much in the 17-page document -- clear evidence of grossly inappropriate and potentially illegal use of taxpayers money. And it all appears to have been coming out of the premier’s office.

The media has been unanimously scathing, across ideological lines. Brian Hutchinson, writing in the right-wing National Post, lambasted Clark as "disingenuous and incompetent."

On Thursday, Rich Coleman delivered an apology on behalf of Clark and the government. Then, on Friday, Clark's deputy chief of staff Kim Haakstad resigned. On the same day, James Plett of the Surrey-Tynehead riding association quit the party.

"I am horribly embarrassed that my name was still associated with that party… I'm not the only one who feels this way," said Plett.

Many insiders from the past dozen years have jumped ship already. More heads may roll -- perhaps even Clark's. An emergency meeting was held Sunday in Vancouver, as Liberals tried to figure out their next move. If Clark decides to hold on through the election, expect many more to jump ship.

Whatever they come up with, it’s too late for the B.C. Liberals. Under both Gordon Campbell and Clark, their rule has been marked by arrogance and corruption.

Their government has been teetering for years, and this "ethnic vote" scandal is the card that will bring the whole house down.

At this point, the May 14 election looks almost like a done deal. The question is not whether the NDP will take power again, but what they will do with it. How much of the Liberal damage will they undo? And can they build something stronger and more substantive than another cynical house of cards?