A friend discovered –- with very little notice -- that he had an opportunity to go to Liberia and teach theatre to youth at an orphanage for 2 or 3 weeks. He asked me for some suggestions for over-arching progressions/goals as well as for a sample 'initial class'.

Because artists are often working with people whose culture is different from their own, I thought it might be useful to share my reflections.

Of course, the first thing a visiting artist should do is learn as much as possible about the people with whom s/he will be working, taking care to note how respect is shown, what are common pitfalls and errors that outsiders make, and what kinds of tasks, accomplishments, thoughts, gestures, arts etc. are valued or denigrated. I won't go deeply into that kind of exploration and thinking, because that would be a whole blog in itself, and because both of my readers already know to ask those kinds of questions.

Then, because one doesn't really know what the desires and expectations of the various stakeholders are, make several rough outlines of progressions: 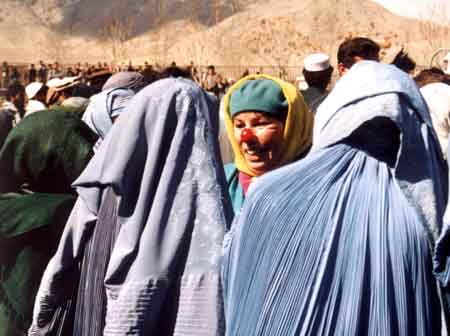 * one with the goal to focus on performing a Narrative (and what that means in this cultural context, or perhaps contrast/compare 2 or 3 Performed Narrative modalities)

Remember that they already have all that and know all that, just in a different way, and that they may OR MAY NOT give a sh*t about Western Theatre.

Then inside each progression, I would have at least 6 activities to choose from when in the moment. If you bring the idea that youwill learn from them to the table, it will go well.

As you are planning each session inside the progression (with your extra side activities, just in case) remember:

A) your planning should cause you to be surprised and delighted by what they come up with. If it doesn't, it's not a good plan (your job is to prep the moment for discovery, not have people spit back what you gave them);

Thinking Strategies) is where the cognitive learning happens--by reflecting and discovering out loud together, they are creating bridges between intuitive knowing and cognitive understanding, and they are doing it as an ensemble. It is also fosters active learning rather than passive (in other words, it means more and will take them farther and they will own it more because you didn't tell them, they told themselves).

Here is a classic, "works nearly every time" sequence from a 'Basics of Western Theatre' progression:

1) Intro/warmup that focuses on group and individuality.

I love the movement name game where everyone copies/repeats everyone else's name and movement, and then after every 3rd person or so, you do them in reverse order, all together, like a dance. Always successful because it's a nice half step between 'solo' and 'group' and everyone has to be everyone else (an important aspect of theatre--to be someone else). Plus it develops that ensemble feeling. Note: a more detailed explanation of this exercise is at the end of this article.

2) Solicit reflections on that exercise.

Ask questions about "what did you notice" "how did you feel"; they will say all kinds of brilliant stuff. Tell them they are brilliant, and make the connections to those things and theatre.

3) Introducing the idea of Where.

Break the large group into 2 groups. It's only one more step of break-up so it still feels safe. This is about "Where". Each group must form a huddle and without the other group hearing, pick a place. Each person in the huddle gets a turn to suggest a place or agree with someone else's. No skipping someone, no saying "that's dumb". Someplace specific, so not "Liberia" but rather "the desert" "the morgue", "the cafe", "the jungle", "the school" or even "the classroom" "the school playground". They may have to vote rather than achieving concensus. Then each person chooses FOR THEMSELVES who or what they will be in that place. The aim, of course, is for the other team to be able to guess successfully where they are. They will get caught up in wanting to fool the other team--great time to remind them that being amazing performers means that the audience will know it and laugh with pleasure! I also try to steer them away from narrative or progressive events--the goal is to imagine "what are the things, people, animals, that define this Where?" Do this exercise twice, with a reflection in between. The between reflection will probably include noticing that people can't all talk at the same time. 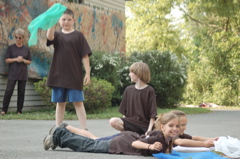 Break into still smaller groups (something between 3 people at smallest and 5 people at largest--6 is no good). Using the same huddle/democratic technique, each group will now think of an EVENT and a specific moment in that event. Example--A Soccer game; the moment when the goalie leaped for the ball and let out a really big fart. The moment when a bird pooped on the teacher while she was yelling. Humor is great. They will then have to create a tableaux of that moment, but with enough "clues" in the human photograph that the audience will know what is happening!!

These are great--it's especially helpful to them if when you look at it, you notice implied details and then ask leading-knowing questions like Which one is the grownup? How did you know that? Is it... the way they are standing? Their expression? etc. of course give a momnet for response before going on to the next layer of question! Are we inside or outside? What are some clues that made you know that? What clues could they add?

4.5) Who and Beginning Middle End

Generate, with their help, a list of 6-8 best known stories/folktales/ stories everyone knows (archtypal stories are best). NO MOVIES. Read some Liberian folktales and children's stories before you go so you can make suggestions.

Each small group from previous exercise will now choose a story (they whisper to you so you don't have more than 2 groups per story). They will create 3 frozen pictures (tableaux to the likes of us) to tell the story--one from the beginning, one middle, one end. What are the most important moments? How will we know what is happening? What clues can you give us so we know who is who? How can you use people to be the setting as well as the characters?

5) Happy comments and reflections--reinforce their awesome-ness.

That's a little over an hour, maybe an hour and a half if it's a larger group.

Best of luck in whatever you next adventure is, y'all!

You go first. You say your name and do a movement--it can be silly or a daily movement (like brushing your teeth). Everyone copies (including saying the name), and must COMMIT. Then the next person goes, and everyone copies them. If someone shrugs and says"I don't know" on their turn, I just go with that and have it be fun and perfect. On every third (sometimes second, sometimes 4th) person, you lead everyone in performing the "dance" of all of the name/movements done so far, in the reverse order (so you are last). The cumulative-ness is fun, everyone has a supported chance to be ridiculous, everyone tries on someone else's movement style, and people learn others' names.