I learned just a few days ago that will be going back to Afghanistan in the fall of 2013, 11 years after my first incredible visit. I have the honour of going over with the Afghan Friends Network, and have begun the flurry of arrangement making even as my mind and heart are in wind and fire.

I have realized that it is hard for many people to understand why this part of the world is so very compelling for me, so I share below an interview I did with Lillie Marshall of Teaching Traveling.

“When people ask what I do, I sometimes respond that I belong to the ACTUAL oldest profession -- a travelling player. Long before there were ladies of the evening, story-tellers all over the world made their way from one fire to the next. In modern terms, I am ‘a theatre person’ for a living; performer, playwright, mask-maker and teaching artist (which means that sometimes I am teaching my craft, sometimes I am presenting something about my travels, and sometimes I am working with K-12 classrooms to create academic lesson plans that use artistic practices for differentiated learning). 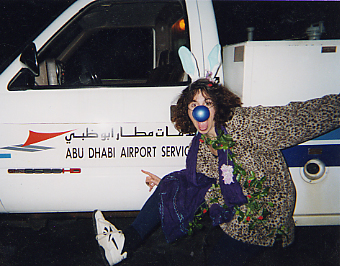 In personal terms, I come from a long line of travellers and teachers, and I have restless bones. I continue to work hard to be excellent at my art, at my teaching, and in my travels (my master’s degree is in Theatre, Education, and Social Change) and I am always looking for ways to combine these passions.

Part of what I do is connected to clowning, the kinds of clowning that exist in cultures to bring change or awareness or light. Thereare many trips that I would love to share with you, but I’ll focus on one for now.

It was February of 2002, not long after the Taliban were ‘ousted’ from Kabul, Afghanistan. I had recently worked with Patch Adams doing some clown therapy in hospitals and orphanages in Moscow. And then, early in February, he called me. A filmmaker in Rome, Stefano Moser, had gotten the idea to bring love and help to Afghanistan, and to make a documentary of what was happening there (Clown in Kabul -- you can find it on the web or try this link) with fellow filmmaker Enzo Balestrieri. He reached out to Patch, and the end result was that the city of Rome and a number of other sponsors (I think Coca Cola was one) were sponsoring a humanitarian mission to Afghanistan. There were 20 Italian clowns from various clown-therapy organizations, one clown from Japan, one from Australia, one from Holland, two from South Africa, one from Argentina, and six from the USA. Those six included 3 folks from the Gesundheit Institute-Patch, his brother Wildman, and their colleague Beach clown -- and 3 other lucky individuals, including myself. The Italian military would fly all of us, the Italian film crew, and tons of medical and relief supplies into Kabul (I nearly threw up in the C-17 cargo plane!). 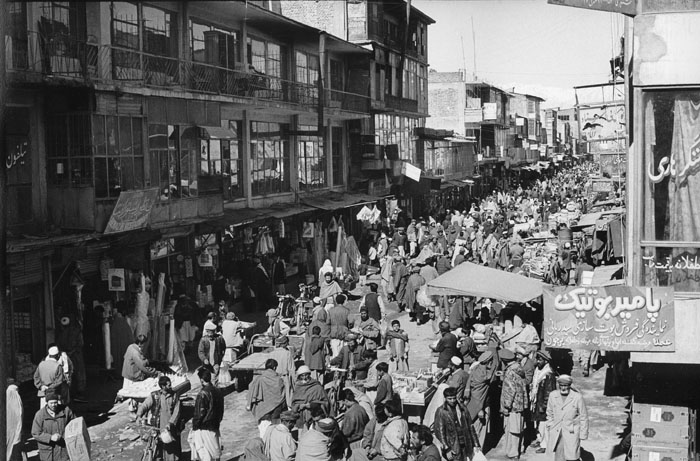 This was one of the most important and valuable times of my life. It was an honour to be there, with the war still happening around us, but being witness to the recovering spirit of the many Afghan people. You have to remember that these people had been hugely multicultural and successful artists, farmers, and merchants for thousands of years, but that the 30 years leading up to the domination by the Taliban had seen endless invasion, hunger, drought, crop and infrastructure devastation, and the Taliban added onto that a ban on toys, art, the wearing of bright colors, music, performances… when we got there, the response was overwhelming. It’s hard to pick just one memory to share -- crowding together with a dozen clowns in one room so falling asleep in the cold was possible? The children missing arms, legs, faces? The sound of laughter and shouts wherever we went? I’ll pick the day of two schools.

That day as we talked at breakfast, the news came about a bomb. This was when some of the U.S. bombs were square, yellow packages and the U.S. food package drops were also square and yellow. A yellow 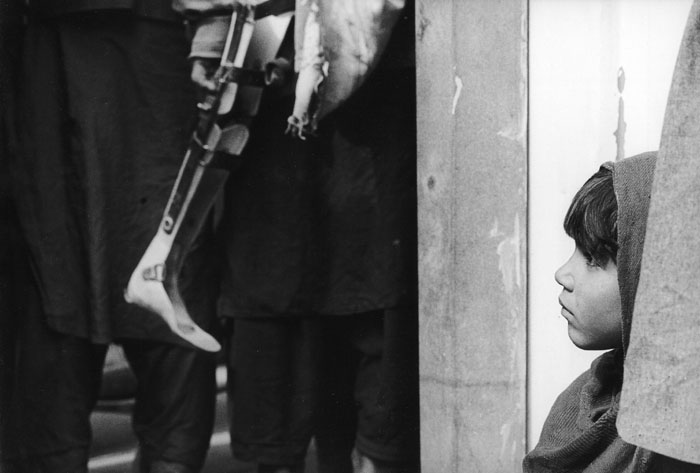 package had dropped in a school yard, and a boy had found it. Even though the people were literally starving, the boy did not hide the parcel, nor take it home, but rather brought it in to the classroom to share. They opened it to distribute the food, and it exploded. The children who survived were severely hurt and in need of blood, and there was not enough. So we all donated a litre. I’m 5’6” and am slender at about 130 pounds; losing a litre made me reeeally spacey. But it didn’t matter. We clowned around before and after our turn to give, and then prepared to split up for our work in the afternoon.

That afternoon, Jean-Paul Bell and I were scheduled to spend time and perform at one of the illegal schools for girls and women. As we met the teachers (both men and women) and the students, I was struck by how much courage it took them to continue with the school, knowing that if they were discovered, the penalties would be severe and brutal. We had a wonderful time using several languages and lots of gestures to communicate, and finally it came time for the show, which we did on a narrow strip of floor surrounded by tiers of women, all holding their breath. At first, the learned tension and fear prevented anything but gasps and silent laughter behind hands and scarves drawn across faces; we were the first people to perform in Kabul since the Taliban had outlawed art, and here we were at was an illegal school. Then Jean-Paul did a routine about being a strong man in a circus. He showed his strength, strutted about, and finally came to pick up a balloon barbell. And, of course, couldn’t lift it. So after multiple tries, he began to ask help from the audience. No one would come out. He beseeched, he pleaded, and finally appealed to the littlest girl in the room, who was 4 or 5.

She got up, looked at him like he was crazy, walked over to the barbell, looked at him again, the picked it up and held it over her head. The room went wild, women cheering and laughing and crying, and the little girl strode triumphantly around the little performance space, barbell and head held high.

I am still experiencing the impact of this trip on my life; I am working on a play about the men who experienced profound facial trauma in WWI and the artists who made masks for them. But radically changed what I taught. When I got back, I wanted not only to be a clown therapist myself, but also to create training programs for clown therapists that benefit the people getting the training as well as those getting the clowning. For example, I have been working with some amazing women in British Columbia on an in-school program for students who are struggling to succeed academically. The students go through a clown process that affects them personally, socially and academically, and then become clown-visitors with the Alzheimer’s and dementia patients in the local elder care facilities. I now spend much of my teaching time working with students, hospitals, and nursing home staff on using clown techniques to improve practice.

I find that my travels always change my art, my teaching, and my spirit. I learn, grow, connect… I am illuminated by the light of a thousand new hearts and minds, by new languages and landscapes, by the everyday thoughts and deeds of other people! I can’t recommend a observant, listening travel (which is not the same as tourism) enough. Affording to do it is the hard part! When I went to Afghanistan, many of my expenses were covered by the project sponsors, and I was able to raise some funds and apply for grants to help cover much of the rest. The best ways to have a meaningful experience and to afford the trip are to either hunt down a work opportunity (teaching English is popular), join a volunteer opportunity (medical organizations, churches, relief projects, Habitat for Humanity, conservation organizations, bird and wildlife organizations all have short-term projects that are in a place that is ‘new to you’!), or create your own opportunity -- my son and I went to Egypt and Jordan together, and he has since hiked part ofthe 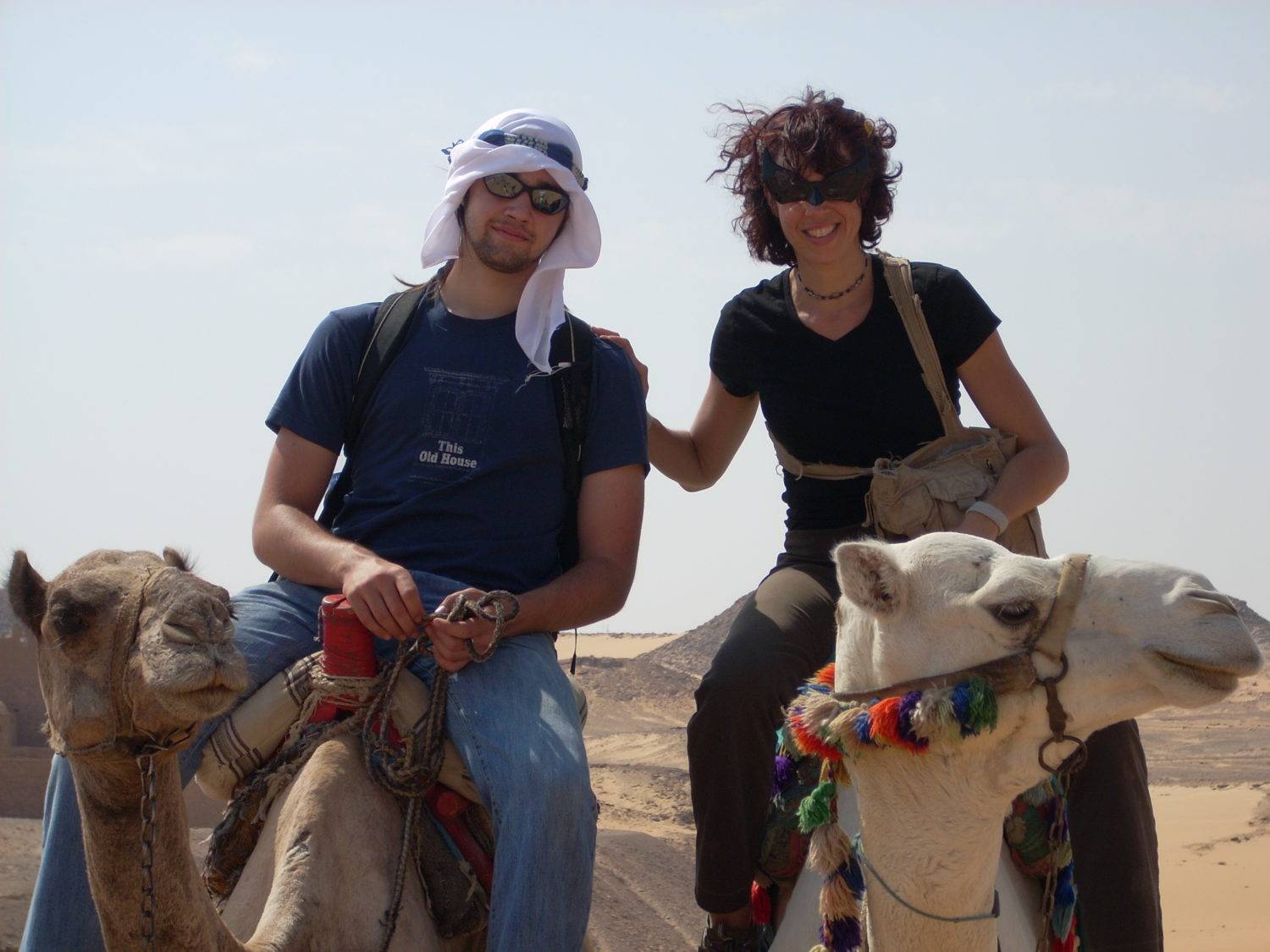 Appalachian Trail, and hopes to work on the Lebanon Mountain Trail next summer. If you are part of a volunteer project, your experience and learning will be terrific material to supplement your teaching or the local school’s social studies and language programs, and there may be some PTA or Teacher Grant funds to support it. There are also grant funds for some kinds of volunteer projects, especially when tied with community or school learning and events. The best way to benefit everyone is to hunt for the volunteer travel projects that best suit you, then begin to imagine how what you do and learn might be useful/helpful to the students or adult learning programs in your community. Dream big!”