Working with children on the Asperger-Autism spectrum | rabble.ca

Working with children on the Asperger-Autism spectrum

I am a performer, playwright and Teaching Artist with a long history and much training in working with people whose perceptual/interactive experience of the world is on the fringe of typical association. In 2012, I was hired by 3 Tier Consulting to do theater workshops with children on the Asperger-Autism spectrum in Watertown and Fort Drum. Most of these children come from families with a spouse in the active armed forces, oftentimes also facing a possible move to another base; although we ran 2 sets of 2 weekly sessions about six months apart, only one boy was in both sets.

Fabulously enough, targeted performance skills are targeted performance skills, regardless of whether the workshop participants are professional adult actors or children with Asperger’s Syndrome.  Working on a stage-sharing Ensemble, creating and understanding dialogue, unpacking meaning, developing a gesture repertoire or honing gestural language are things ALL actors must constantly revisit, which means that ‘Going to Acting Class’ is something an eleven-year-old boy can talk about at school with pride. It is also a context that can comfortably absorb people with a wide range of social skills, including typically-developing children.

We had two groups, one for children from four to seven years old, and one for children (who turned out to be all boys) from nine to thirteen years old. The younger group had children all over the Asperger-Autism map (I have found that ‘spectrum’ implies a linearality that is not really helpful or accurate in a performance context), and the older group was made up of boys with various manifestations of Asperger’s Syndrome.

With the younger group, I chose the theme of Weather, specifically wind and snow, because it was late fall/early winter, and kids ‘on the spectrum’ in particular respond well to themed structure. I knew that they would need the space and a variety of concrete visual, sound and text clues to guide implicitly, so I created a circle with one “opening” made up of soft blankets with differing colors and designs, folded to create a large ‘mat’, knowing the children would gravitate toward them a places to be, lie down, watch, etc, and that they would choose the design and color best for them.

In the middle of the circle were picture books (fiction and non-fiction) and some magazine photographs about winter, as well as crayons, markers, and paper. As children drifted in, they were given the opportunity to draw, listen, read, look, or talk about the weather and the coming winter. Once we were all there, we shifted from drawing, etc to recounting to imagining we were going to go outside and play in the snow.

Each child in turn (the idea of waiting to take your turn and knowing what the appropriate social cue is for that is HUGE) suggested something we had to wear or bring in order to go outside and play (reinforcing life skills). Once we all agreed we were ready, we got off our mats and pretended to do snow things—skate around the circle to music, sit on our mats and go ‘sledding’, make snow angels, and even rip up paper and throw it into the air for it to fall. The last snow activity we did was make imaginary snow beings and snow creatures in the air, as though the air was the snow that we rolled, stacked and shaped. The children took turns explaining what their snow creature was (“Bunny”) or what their snow man was doing (“throw snow!” or gesturing a pose, sometimes with help). We then took a BIG step. After taking off our pretend outdoor clothes, everyone got a partner.

I demonstrated how I was going to gently turn my partner into a sculpture, we brainstormed some movement ideas and then each child had a turn to turn their partner into something. They could touch, gesture, use words, whatever, but it had to be gentle and it had to be more than one action (we encouraged both arms and legs with optional silly face). The receiver had to wait and then only take the pose suggested. All sculptures were applauded, and then we had quiet music movement time, where children had the option to enjoy the music on their blankets or move around the room to the music as they wished or as the elements of winter I offered (“What if you were a snowflake?”). I try to think of a class plan as being full of the patterns of breathing, inhale and exhale, collect/focus in and expand/focus out, with the pattern of such changing tempo depending on whether I want the ‘heartbeat’ of the group to quicken, steady, or slow. This kind of planning is especially important in working with these children, and one must be constantly on the lookout for when it is time to slow down in stretching ebbs, like mathematical ellipses. The movement-to-music time was necessary to break free the intensity of having to focus on and touch (!) another child, but it had to be gently controlled up to a release and brought ebblingly back to a sweet quiet, each on our blankets after only about 5-7 minutes (which is less than other populations might need). 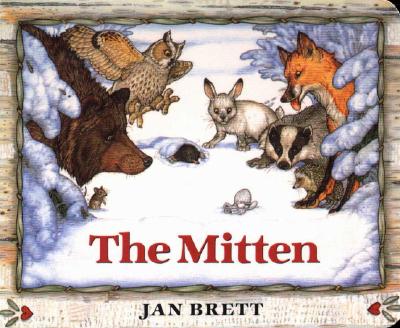 I then skim-read them Jan Brett’s The Mitten, mostly focusing on the next animal, the actions, and asking things like, “Wow! Look at the bunny’s face! How do you think he feels?” or “Oh no! The prickly hedgehog will be squished inside too! What would it be like to be in the mitten with a hedgehog?” or “What do you think will happen next?” targeting reading expressions and gestures, putting oneself in other’s place, and predicting outcome.

Then we started over from the beginning and everyone’s blanket was a mitten! We could be whichever animals we wanted in our mitten, yelling out “Ouch” or “Move Over!” or “Please let me in!” if we chose. The most fun, of course, was exploding out everywhere at the end when the bear (also in the mitten) sneezes. We finished up with me reading/gesture-performing William Steig’s Brave Irene, with all of us chiming in with movements and sounds and phrases as we went along through the story (sort of participatory street-theatre style), and stopping to imagine how the characters felt or what they wanted or what they would do.

With the older boys, we targeted many of the same skills, but in different ways. We began with shadow puppets, and after encouraging them to experiment with design and create whatever characters they chose, they had to tell a short story (it could be silent) using the shadow puppets and the other boys as puppeteers. Each child had an opportunity to be the boss, but was not required to be in any one else’s . If they chose to be, however, they had to take direction and not take over the narrative. It was an interesting challenge for them, as the idea of hiding behind a screen and seeing the shadows appear in the dark room is pretty compelling, although the idea of doing what you were asked and not your own idea until it was your turn was daunting indeed. The ‘cool’ factor won out!

From there we progressed to me reading/showing a book with paper-cut illustrations of the Japanese legend The Warrior and the Wiseman. We unpacked the story as we went as well as afterwards, and then created masks of the characters to wear to act out the story. Mask-making was such a hit, we didn’t have a chance to perform the narrative, although the boys would put the masks on and act out as they developed their masks. Boys with Asperger’s are usually well aware by the time they are 10 or 11 that the language of facial gestures, expression, and subtextual meaning is pretty easily interpreted and used by their peers, but still a murky, seemingly disconnected gobbledygook to themselves. They are therefore, very sensibly, generally resistant to taking risks with face/gesture/subtext/meaning; that they spontaneously took risks and played with this crazy alien language is remarkable, and I believe the masks/mask-making made that possible.

Having explored shape a bit with the shadow puppets, they had to think about color and expression and feeling as it was established in the strong characterizations of the Elemental ‘Demons’ and two main (and diametrically opposed) characters. It’s a great book for pre-teens in general, as it is about what the longer term consequences are of taking what you want versus being generous, and what it means to be a man. It’s even more appropriate for pre-teens with Asperger’s Syndrome, as the Demons respond immediately and impetuously to their circumstances and the Wiseman has to deduce from their actions, dialogue, and expressions how they feel, what his brother the Warrior has done, and what he himself can do to set things back on the right path.

Theatre is always an effective and exciting medium in which to explore, discover, and practice emotion, relationships, and social meaning, but it is especially beneficial for children for whom this kind of stuff is like an alien landscape. The main difference is that the ‘steps’ between one idea/practice and the other need to be closer together and more carefully illuminated.