The delicious mathematics of slapstick

She enters, pauses, then turns and walks stage right, and Inspector Dreyfus leaps out. She stops. "Why didn't that work?"

"You have to count to three. A full count. That was just a bit too long, and I think 'M' (the boy playing Dreyfus) wasn't sure when to jump out."

"Yeah, I thought I was supposed to jump, but you were still there," the boy adds.

"So, it goes 'step-think -go, walk 2,3,' then the upstage-right one is the second set?" The girl ('B') playing Inspector Clouseau tilts her head, thinking.

"The first grab/miss should be just under three seconds, then three steps, the pause straighten turn go," I reply.

"Because that's a three, then there's the middle one, with the lasso...which is the third one!"

"So," chimes in M, "I have to go twice as fast to get to the other opening for the pounce."

"That would be awesome," I nod.

They go at it again, the above math-like jargon making complete sense to them, and this time, Dreyfus leaps just as Clouseau takes a step stage right, then a moment later, he leaps out again, just as Clouseau has turned toward centre stage, then finally he and his lasso erupt out of the centre stage...just as Clouseau miraculously had to tie her shoe, and another character is captured.

We are on the cusp of the perfect math, because comedy relies on math -- the number of builds/attempts have to be odd, the beats have to be perfectly shorter or longer than the timing of real life, and the rate of acceleration or deceleration has to be perfect. The length of pauses, of suspension, of delivery...there are often many comic options, but for each option, the pattern is rigid. It's almost like revealing the flawless beauty of a gemstone -- the math of the cut has to be perfect.

They have practiced the routine several times now, sensing the places to speed up, noticing the places where it is almost right. "Holly, this part -- what could we do to make it funnier?"

"Well, it's the second section, so start the third beat sooner -- cut a teensy bit off that second moment -- and stre-e-etch it out to the last possible second, but don't have the total time be any longer."

"Yes, and inhale as much as you can on that beat-it creates suspense, because you are suspending the relaxing breath. Then the exhale is the 'GO'." 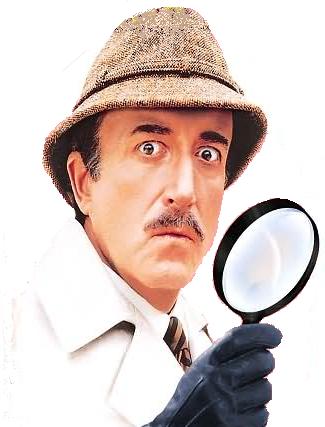 Both youth (they are in middle school) nod and reply, "Ahhhhhoh" in that arcing sound that shows that the pebble has landed, the combination worked, the light has clicked on. They happily run up to the stage, and begin it again. Unable to help themselves, the other cast members and assistants, all busy with their own tasks, turn to look...because this time it is perfect.

The actors are fast and furious, but the characters are relaxed and nonchalant, seemingly completely unaware of anything but the now, the mathematics of timing so perfect you can't see it. And...the lasso! The group bursts into laughter and a smattering of applause, and the sweating, panting M and B look at each other and grin. They run up to me, out of breath and flushed with happiness.

(Note, this first wonderful picture is from a Chowdaheads blog about the great Clouseau. Visit it here. The second is from the LA Times, and the last from a wiki page...click on those picks to be taken to their source.)