Spring, and the Artist Emerges

Today the snow melted, and I was able to unzip the jacket I wear in the house over my sweater, long johns, and undershirt, and finally, after months of experiencing the act of creating like sucking marrow from a dry bone, I felt like it might be fun to work on one of my projects.

"Might be fun to work on one of my projects," coming from my "North of the Wall" inner landscape, was a powerful and radical thought, and I began to think maybe I was able to not only catch up on the bare bones of what was past due, but possibly even -- gasp! -- actually pick back up the threads of non-critical projects, and do those as well (like submit my play and write a blog post)!!!

Even though it has snowed again for the past two days, several nights ago was the first warm night of the year here in the Finger Lakes region of Upstate New York. I couldn't help it; tired as I was, fed up and frustrated with difficult situations and from not having said more often, the softness of the wind tugged me free from the car. I paused, captured, face upturned, and felt every muscle in my body and even my brain relax. It has been a tough winter for me, a winter that seeped into my creativity and made it curl up, spines outward, and bury itself in dry leaves. That smell, however, that true spring smell, made that semi-hibernating creativity unfurl. There is something breathless and secret about spring nights, full of sound, peepers, earth smell and promise....

I share with you some thoughts I had during the winter: 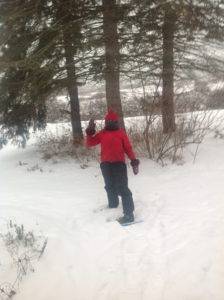 at my house, and down to a record setting -61 degrees Fahrenheit (with windchill) elsewhere in the Finger Lakes region. We were out of split wood, and my husband (the usual wood-splitter) had a broken ankle, so I pulled on a sweater, coat and boots over my pajamas, topping it off with a hat and scarf, and headed out while the sun was rising to attack the woodpile.

As I was out there whacking away at the often uncooperative chunks, freezing my butt off, my eyes tearing with the cold, I said to myself, "How is this a metaphor for working on an artistic or community project?"

Okay, so the "being out in the cold" part is obvious.

But there is also doing for others, overcoming seemingly insurmountable obstacles, and actually accomplishing nearly impossible dreams that is deeply satisfying.

In retrospect, I realize that work is the distance between desire and accomplishment.

And today is my return to a joy in work, which makes the traveling the distance much smoother.