September 1st, 2014, marked the 100th anniversary of the death of Martha, the sole surviving Passenger Pigeon.

Quite a few interesting, powerful, relevant articles have come out, ranging from blog post by Cornell Lab of Ornithology staff, Hugh Powell “Never to Be Repeated: Lessons From the Passenger Pigeon” (it includes link to NY Times editorial by Lab of O Director John Fitzpatrick) to thoughts about “de-extinction” in a Smithsonian article by William Souder, “100 Years After Her Death, Martha, the Last Passenger Pigeon, Still Resonates.”

However, for me it wasn't until I saw the paper pull-out from my edition of the Smithsonian Magazine, that I felt a real connection.

It was printed with the pattern to fold the paper into an origami Passenger Pigeon.

Like the origami cranes, gracefully and soulfully keeping us aware of and connected to the victims of the bombing of Hiroshima, this funny little paper art becoming a bird in my clumsy hands immediately made Martha both real and relevant. Art, especially participatory art, illuminates ideas and feelings that are not reached by the neuropaths used when we read text, and spreads a dawn of new understandings like concretized, limiting words never can.

And what might be the next step an organizer, educator, artist might do with an origami Passenger Pigeon? What if the children in your group each made one, then created a movement piece with them exploring flight or migration patterns on a map or in front of an image? What if they became a starting 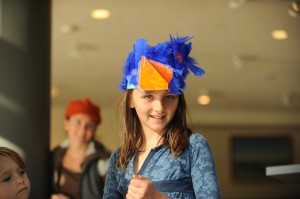 place for Paper Art about other losses, physical, cultural, personal, to be shared at a community center or public space?

Here in Ithaca, there was a call for any visual art about Passenger Pigeons, curated and currently hosted at the Cornell Lab of Ornithology. There are soooo many exciting and engaging next steps, each easily inspired by a simple folded sheet of a lost bird. Heck, just make some and brainstorm some next steps with your group! You can even become a part of the North American Passenger Pigeon Project with your art or community project! You can download an origami pattern to print for free, or order a box of 50 pre-printed ones for a whopping $12.50 at the Fold the Flock website.

Martha's remembrances include other incredible art pieces and projects. I am including the ones near my home in the Finger Lakes region of New York State -- come if you can, but if not, perhaps you will be inspired to do something similar with your own students, group, communities.

- The 16 clay bas-reliefs of Passenger Pigeons by artist Anita Welch are hung on trees in Sapsucker Woods, and seem, to me, like shades of the birds of themselves as they haunt the forest.

- The work of sculpture Todd McGrain, whose huge bronze statues of Lost Birds slowly 'migrate' from site to site in regions where they were plentiful. His Passenger Pigeon currently looks out over a marshland near the Lab of Ornithology's Visitors' Center. You can learn more about these statues and The Lost Bird Project here .

- The sound/loss artworks of Maya Lin, especially the "What is Missing?" project. To quote her website: “What is Missing?, Maya Lin's last memorial, will focus attention on species and places that have gone extinct or will most likely disappear within our lifetime. The project exists as a multi-sited installations, as a website, whatismissing.net, which acts a nexus for the project, and as a virtual and physical book."

The website includes a dynamic , moving interactive map that allows participants to learn and reflect on extinctions past, present, and future.

- The work of Stef den Ridder, presently a Cornell Lab of Ornithology Bartels Science Illustration Intern, whose work graces the cover of the "State of Birds Report 2014" and other recent publications. This image is used with permission, and you can read the report (and see some of her work) here or watch on YouTube here.

- Finally, a tribute written to/about Martha herself -- an article by Joseph Stromberg, written for Smithsonian Magazine in 2011: “Martha, the World’s Last Passenger Pigeon”

Art reaches us and teaches us.