Stop the war on play

Now that the school year is in full swing and folks are beginning to stress about test scores, the idea of extending the school day, cutting recess, cutting creative activities and so on comes again to the fore.

"Play is under pressure right now, as parents and policymakers try to make preschools more like schools. But pretend play is not only important for kids; it's a crucial part of what makes all humans so smart," Alison Gopnik wrote in Let the Children Play, It's Good for Them!

A leading researcher in the field of cognitive development says when children pretend, they're not just being silly--they’re doing science. If you are a regular reader of mine, you know this is crazy making for me -- I have written blogs in the past that touch on related subjects (for example, The Importance of Play). I also believe that play is crucial to a healthy society; it gives us the opportunity to explore ideas and test working relationships, take risks and discover that failure is a step on a path, not an end. Yes, I love using and recommend heavily Michael Rhodes book, Theatre, Community and Dialogue, the Hope is Vital Training Manual AND the original 1976 community-building book The New Games Book: Play Hard, Play Fair, Nobody Hurt, edited by Andrew Fluegelman. Moreover, neuropsychologists and others have shown how we build new neurons with focus and practice, including those for empathy ( see “Mirror Neurons”  and “How to Grow the Good in Your Brain” ). 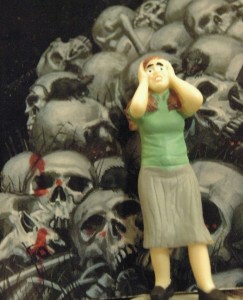 Why the heck are we denying developing humans the opportunities that make them become fully realized?!?

So as not to bore you to death, I have broken the rest of this blog into three easy-to-digest sections, and you can scroll to your fave.

I. How is play important to individual development?

II. Why might play be important to the health of society?

III. What are some cool awesome play-like things you could do RIGHT NOW that would also be helpful on a larger scale?

"'The experience of play changes the connections of the neurons at the front end of your brain,' says Sergio Pellis, a researcher at the University of Lethbridge in Alberta, Canada. 'And without play experience, those neurons aren't changed,' he says. It is those changes in the prefrontal cortex during childhood that help wire up the brain's executive control center, which has a critical role in regulating emotions, making plans and solving problems, Pellis says. So play, he adds, is what prepares a young brain for life, love and even schoolwork."

There are links in the article to more studies and commentary on play, its impact and its decline, and in fact, NPR's website has a whole section on Education (click here).

II. As an artist, I recognize the crucial role play and playfulness has in a creative process, but more importantly, in 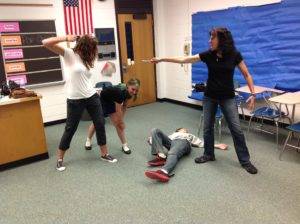 our ability to be less afraid of the unknown and of failure. Play is where we can learn to roll with the punches, take healthy risks, form useful alliances not conscripted by religion, race or like-ability but born out of a mutual desire to accomplish something. A lack of play opportunities compels us to fear "risk" and "other," and fosters the idea that we must feel secure at all times and at all costs, cling to what is known as "safe" rather than risk alliances and explore change. On a large scale, this is how we become controllable; the Taliban outlawed arts, education, and playing, as do many regimes.

In John Poole's article, he writes,

"Not surprisingly, Panksepp and others think the lack of play is a serious problem. Especially at younger ages. And particularly in school settings. Without play, we know that other species become quick to aggression and have trouble 'fitting in.' Panksepp thinks the rising rates of ADD and ADHD may in part be due to this problem. In trials where extra playtime was given to kids showing signs of these disorders, there was marked improvement in their behaviors as reported by teachers and parents. 'It's not just superfluous,' says Panksepp. 'It's a very valuable thing for childhood development. And we as a culture have to learn to use it properly and have to make sure our kids get plenty of it.'" 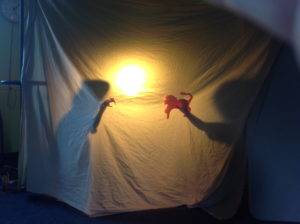 A fabulous website called "Invention at Play" is very much worth visiting to arm yourself! Here's a sample:

"Make Believe/Visual Thinking: In pretending, we learn to navigate with ease between real and imaginary worlds while learning the differences between them. Using our imaginations encourages original thinking, flexibility, adaptability, empathy, and the ability to generate multiple solutions to a problem. Pretend play helps us learn to think visually and spatially and to both capture and express ideas."

III. Cool games for grown-ups to help make a difference!

In "How Scientists Are Using Games to Unlock the Body’s Mysteries! They're not just for kids anymore", Sharon Begley writes about online games that help scientists solve important problems, like Foldit: "This online game asks you to determine the 3-D shape of a protein, knowledge crucial to understanding how it works," (Foldit here) and Eyewire (neuron mapping).

Other fabulous fun that helps is on Zooniverse (I LOVE these!).

I want to close with another Sharon Begley quote, "It's this tinkering approach, this trial and error, that is the basis of play. Beginning when we could hold a rattle, we all learned to solve problems by playing with them."