I have spent much of this Autumn working on creating the violence for an all-female production of  "Julius Caesar", which opens in November. This type of project is some of my favorite work, and this production in particular has been inspiring, challenging, and visionary.  The challenges the women have struggled with and slowly-- with growing fierceness, glory, and concentrated power-- overcome have prompted me to post this blog from 2012 once more. Coaxing adult women into taking up more space, striking with surety, turning with quick and safe confidence, weapon in hand...even having to remind them that this warrior does not fear death.... I want girls to have some practice being bold in safe, fun environments! It used to be popular to be boys or pirates or whatever at Hallowe'en, but I watch as the one day a year we can try a persona on, break free from our assigned role and have a bit of wildness turns into another day for girls to be icons of "thingness" rather than "action". Let this wonderful, wild day of being someone else remind us to give our girls encouragement to swash some buckles! HAPPY HALLOWE'EN!!!

I love pirates. Not, of course, modern real-life pirates, but the pirates of history and fiction with whom I fell in love as a girl. I still remember the thrill I felt when I met my first wild and adventurous pirate, Sinbad the Sailor from 1001 Arabian Nights. I was a shy, bookish, wandering girl of 8 who spent long afternoons alone in the woods to recover from school where having both too much energy and an agile, hungry mind made me ….. well, let’s call it “less than popular”. My discovery of the swashbuckling, adventurous narrative saved me. 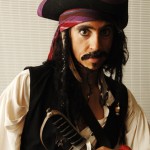 To be clear, my love for the buckling swashers and swashing bucklers was not a love born of wanting to be in a moment with them; I wanted to be in a moment AS them. I wanted adventures! I wanted to wave a sword and save people and ride a fast horse or a fast ship or a slow camel under a different canopy of stars. While it’s true that there are more and more girls and women who are allowed to be heroic or adventurous or daring in novels, the stage and the screen still reflect society’s general expectation of females, and there is tremendous resistance to both writing such parts for women and casting women in such roles.

Enter Stage Combat. So delicious! So many techniques and practices that borrow from everything from martial arts to mime to circus tricks, and so many wonderfully pointy objects to wield. There is no room in safe fight practice for ego or a sense of victimhood, nor for hesitation/disempowerment or domination. A good teacher/choreographer also designs a fight for surprise. At this point in my career, teaching stage combat to mixed-gender (mixed-race, mixed-ethnicity, mixed-class….) groups of young people is one of the most joyful, effective, and subversive practices I know. Plus it’s waaaay fun. 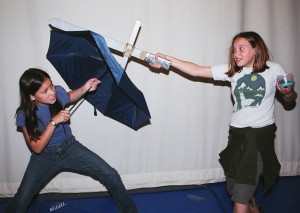 Stage combat is also an entrance to roles otherwise denied chicks. The practice (The skills? The mindset?) has allowed me to play a number of swashbuckling roles (including pirates), to direct swashbuckling productions (like “Pirates of Penzance” for Cornell’s Summer Concert series last June), and to find a bravery in my self when I need it.

So, Teaching Artists, guardians, parents, clamour for the opportunity for your young women to practice saving the day and having adventures. Long live the ladies of the blade!