The Egyptian revolution: Phase one

This week marks five months since the start of the Egyptian revolution on January 25. Though Canada's Prime Minister Stephen Harper compared the liberation movement of 80 million people to toothpaste, most of us have been incredibly inspired by one of the most significant developments in our generation. While the media have stopped reporting on it, there was a renewed debate when Parliamentary page Brigette Depape held up a "Stop Harper" sign during the throne speech, and called for an Arab Spring in Canada. She was falsely accused of equating conditions in Canada and in Egypt, and for even suggesting that we have anything to learn from Arab Spring since we already have parliamentary democracy. I think we have a tremendous amount to learn from the Egyptian revolution (and so do Egyptian activists) and was fortunate to visit Cairo to learn.

This blog entry will focus on the first phase of the Egyptian revolution -- the 18 days that shook the world, ousted dictator Hosni Mubarak, and won political reforms -- and the struggles that led up to it. The next entry will look at phase two of the Egyptian revolution, which seeks to extend these reforms and connect them with longstanding social and economic demands. 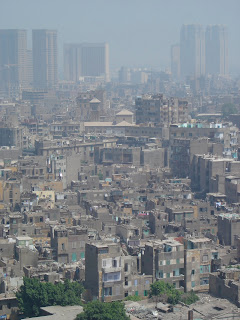 Egypt is the largest country in the Arab world and has been used, along with Saudi Arabia and Israel, to enforce U.S. imperialism in the region. For 30 years the people of Egypt lived under the repressive Western-backed regime of Mubarak, who has used a vicious state apparatus to enforce neo-liberal policies keeping more than 40 per cent living on less than $2 a day. This view of Cairo -- where a few nice hotels overlook a vast expanse of slums -- provides the context for the Egyptian revolution. While it has been presented as a spontaneous event organized on social media on January 25, it is the product of a decade of struggle for political, economic and social reforms.

In 2000, the second Palestinian intifada provided inspiration to resist imperialism. In 2003, Tahrir Square was briefly occupied as part of the international protests against the Iraq War. In 2005, the Kifayah movement emerged to speak out against the Mubarak dictatorship. In 2006 strike waves emerged, starting with women textile workers of Mahalla.

Independent trade unions have been at the heart of movements against repressive regimes -- from the solidarity movement in Poland to the overthrow of apartheid in South Africa, and began forming in the lead up to the Egyptian revolution. Since 1957 Egyptian workers have been ruled by the state-controlled General Federation of Trade Unions, which undermines their ability to fight, but this began to change after Mahalla. As Egyptian journalist and activist Hossam El-Hamalawy said in a videotaped speech in 2008, 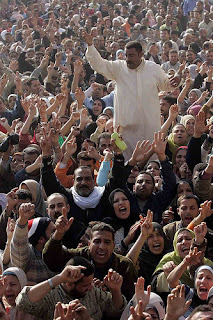 "Mahalla showed us the hope...If Egypt falls the entire Middle East is going to fall. We have the biggest working class in the region with a long and militant history of industrial struggle, and we are very optimistic about the developments in the future...We hope in the near future that we're going to witness the revolution."

In 2007 there were more than 500 strikes in Egypt, including the property tax collectors who struck for 3 months -- including an 11-day sit-in by 5000 women and men in downtown Cairo -- and won a significant wage increase. The democratically-elected strike committee became a permanent structure, forming the first independent trade union, and in July 2010 the Independent Teacher's Syndicate was formed.

Meanwhile global food prices rose dramatically from 2006 to 2008, and since then the great recession has worsened unemployment especially for youth. When the Mahalla workers planned a strike on April 6 2008, there was solidarity from youth who formed the April 6 Youth Movement, advocating for free speech and democracy. In June 2010, the brutal killing of Khaled Said prompted a surge in opposition to police brutality. In November 2010, rigged elections increased resentment over the most basic lack of democracy. On December 17, Tunisian university student Mohamed Bouazizi triggered an uprising; when Tunisian workers organized a general strike, the dictator Ben Ali was driven from power on January 14.

So the fusion of a decade of political and economic struggles -- sharpened by the economic crisis and inspired by the Tunisian revolution -- led to the first phase of the Egyptian revolution, beginning January 25. 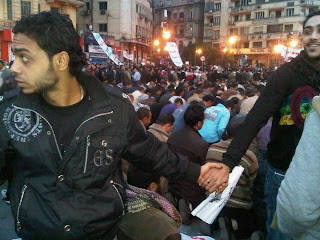 Social media certainly played a role in the beginning of the uprising, as the video by April 6 Youth Movement leader Asmaa Mahfouz -- calling on people to go to Tahrir Square -- went viral. But with mass poverty and illiteracy, many Egyptians have neither the resources nor the ability to navigate social media, and the mobile phones and the internet were shut down on January 26-27. Yet the uprising intensified through traditional mobilizing techniques in the streets and mosques. People went through their buildings and streets calling to their neighbours to join them, and when churches were closed on Friday many Coptic Christians went to mosques to hear about the mobilizing -- analogous to the way churches were used in the American Civil Rights Movement as organizing bases. One of the workers at our hotel described hearing thousands of people outside, and when he went into the streets he was carried by a wave into Tahrir Square.

The revolution was a combination of spontaneity and self-organization. Having failed to quell the revolution by shutting down social media, the regime tried to create panic by shutting down the banks and businesses, and sending plain-clothes police to attack the demonstrators. But popular committees formed to organize security, sanitation, childcare, literacy and health care in Tahrir Square. On January 30 the Egyptian Federation of  Independent Unions was launched in Tahrir Square, uniting 14 unions. 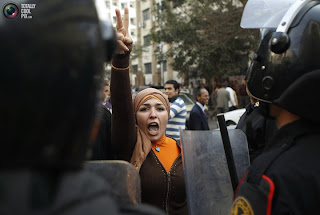 Women played leading roles in the revolution -- from the workers struggles that preceded it, to the youth like Asmaa Mahfouz, to the countless protesters -- and unity was built between Muslims and Christians. On Friday February 4, Christians protected Muslims for Friday prayers, and Muslims reciprocated the solidarity during Sunday mass. And while the cameras were on Tahrir, the workers were taking the revolution to the factories. This followed the pattern of the Tunisian revolution, where workers were not the first organized force but were the most decisive by the role through the use of mass strikes, as El-Hamalawy documented:

"All classes in Egypt took part in the uprising. Mubarak managed to alienate all social classes in society. In Tahrir Square, you found sons and daughters of the Egyptian elite, together with the workers, middle-class citizens and the urban poor. But remember that it's only when the mass strikes started on Wednesday that the regime started crumbling and the army had to force Mubarak to resign because the system was about to collapse...

From the first day of the January 25 uprising, the working class has been taking part in the protests. However, the workers were at first taking part as "demonstrators" and not necessarily as "workers" –- meaning, they were not moving independently. The government had brought the economy to halt, not the protesters, with their curfews, and by shutting down the banks and businesses. It was a capitalist strike, aimed at terrorizing the Egyptian people. Only when the government tried to bring the country back to "normal" on 8 February did the workers return to their factories, discuss the current situation and start to organize en masse, moving as an independent block… 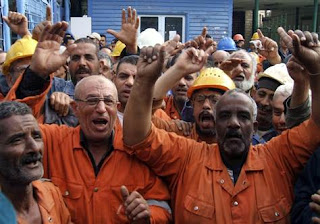 On Saturday I started receiving news that thousands of public transport workers were staging protests in el-Gabal el-Ahmar. The temporary workers at Helwan Steel Mills are also protesting. The railway technicians continue to bring trains to a halt. Thousands of workers at the el-Hawamdiya sugar factory are protesting and oil workers announced a strike on Sunday over work conditions. Nearly every single sector in the Egyptian economy has witnessed either strikes or mass protests. Even sections of the police have joined in."

On February 11, Mubarak was forced to step down.

The first phase of the Egyptian revolution has won significant political reforms -- from the promise of fair elections, to the partial opening of the Rafah border, to partial freedom of assembly and speech that are obvious on the walls and streets of Cairo. But these political reforms are not complete nor guaranteed, nor do they represent the full demands. The revolution is continuing as a battle between those trying to restrict the gains to minor political reforms, and those trying to deepen the revolution to achieve the social and economic demands that have been at the heart of the revolution and the struggles that preceded it. The next blog entry will look at this, the second phase of the Egyptian revolution.

Thank you for choosing rabble.ca as an independent media source. We're a reader-supported site -- visited by over 315,000 unique visitors during the election campaign! But we need money to grow. Support us as a paying member (click here) or in making a one-off donation (click here).