Peanut butter on Wassa crackers with honey for lunch again is getting maybe a little too familiar.

Our meal is interrupted by Ronald who points up river emphatically. We look but can't see anything new.

Squinting into the distance we see what looks like a line of ducks heading for the far shore, a 'V' shaped wake behind them. Through binoculars we can tell that the blobs in the water are actually pairs of caribou heads and tails. As they reach the far shore, seven dark caribou bound out of the water splashing. They stand for a while, then trot along the bank looking for a break in the high sand cliffs through which to return to the shelter of the forest.

As the minutes pass our trained eyes spot group after group of caribou swimming, all west to east, the 600-metre width of the Severn. Terry explains that these are the threatened woodland caribou, darker and more rare than their tundra cousins. They are travelling east to gather, lock antlers, and rut. By lunch we have counted 40 heads crossing the river directly above and below us. As we continue our paddle it becomes clear that we are in the middle of a substantial migration route. Paddling 30 feet from the western shore a group of 14 caribou emerge suddenly from the forest. Caribou of all ages stand directly across from us on the bank pausing, confused by our presence. The calves stick close behind their mothers.

Then two large caribou, their antlers in velvet, emerge from the woods and set the group in motion running along the shore directly beside us. As they pull ahead they plunge into the river, intent on crossing as if pulled by a powerful magnet towards their yearly mating ritual Our boats pass within 20 feet of the fast swimming animals and we can hear their heavy breathing. What great fortune to be at this exact spot as a herd of these graceful, majestic beings of the deep forest emerge briefly to ford the river we are travelling.

Over 100 of these elusive icons of the boreal forest pass within our sight in one afternoon. Woodland caribou are a threatened species. Once they roamed as far south as Ottawa, but they have been chased out of half of their range by encroaching extractive industries. Their survival strategy is based on dispersal in inaccessible terrain deep in dense boreal forests and wetlands. This makes it energetically costly for wolves to pursue them. Anywhere a road is built into the forest it becomes a wolf highway, easing their pursuit of the caribou who must retreat 12 kilometres. In another 10 years the caribou retreat a further 20 km as deer move in to browse on roadside shrubs that grow in the disturbed ground. The deer provide sustenance to the wolves who hunt the caribou, further shifting the balance against the caribou.

Once the caribou leave they never return. 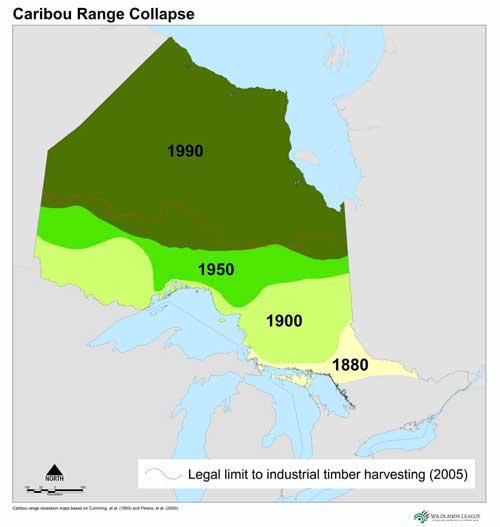 Caribou in the boreal are like the canary in the coal mine. They are an indicator species for the health of the forest and a range of species and ecological processes that require intact, unfragmented landscapes. Here the caribou populations are healthy and continue their delicately balanced dance with the wolves. There is so much that science still does not understand about this complex ecosystem. But we do know that introducing industrial business as usual into this landscape as we have further south is a nearly certain recipe for ending KI's vital relationship with the caribou.

Confluence: An update from the KI Nation Paddlers, Sep. 3, 2012 (afternoon)

The Fawn is as wide as a football field now and deep, having collected the waters of hundreds of tributaries draining 13,025 square kilometres of land. Our paddles rarely touch bottom anymore and only a few boulders -- large erratics left by retreating glaciers -- protrude above its surface. This is big water.

Coming around a wide bend we reach what appears from a distance to be a very long lake running perpendicular to the Fawn. As we reach it we see that it is no lake. The current in this large body of water is ever more swift than anything we have experienced so far on our journey. We have reached the confluence with Katajiiwan -- the Mighty River, known in English as the Severn. It dwarfs the Fawn whose waters are quickly subsumed into the murky, silt laden flow of the Severn.

At a point protruding into the confluence we find a note and some treats left for us by Chief Donny Morris a week earlier as his canoe party passed this point on their way down the Severn after having navigated the Sachigo River, another major tributary of the Severn, which flows through the Sherman Lake area where Chief Morris was raised. 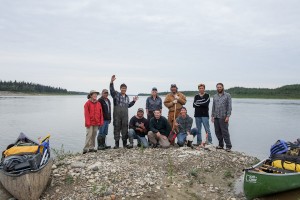 Fearing further high profile conflicts and costly buy-outs the government of Ontario withdrew 23,000 square kilometres of KI homeland from all mining activity -- the largest such withdrawal in Ontario history.

KI succeeded in gaining partial respect for the moratorium on industry they had declared a decade earlier. But half of the KI Water Declaration area remains open to mining exploration -- a situation that seems to invite further conflict.

Please write to the Premier to encourage him to fully respect KI's Water Declaration and Indigenous Laws.

Terry pulls his canoe over to the left bank unexpectedly. We follow him up the steep sandy bank to find a dark stone with white writing. 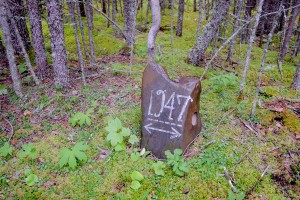 The six white lines symbolize six boats (Cheman) and the double sided arrow marks a return trip. The stone was marked by the men paddled, poled, and lined supplies up the Fawn River in large york boats for the Hudson's Bay Company, and brought furs from Big Trout Lake down to Fort Severn on Hudson's Bay.

Fort Severn, the northernmost community in Ontario, became a fur trading post in 1689, making it one of the oldest in the oldest in Canada. As recently as as 1947 this was the primary way outside supplies arrived in KI, and the sustainable fur trade was the primary source of cash income for KI families. Terry's grandfather and uncles worked on york boats, as did many of the men in their generation. Brandon's grandfather and grandmother raised him and four siblings on the food and income generated from their trapping. Brandon is eagerly anticipating his upcoming 18th birthday when he will inherit his late beloved grandfather's cabin.

When big ships arrived in Fort Severn the local people would paddle the supplies up the Severn River up to the confluence with the Fawn. They left the supplies in a stone storehouse near a creek at the confluence and then KI people would bring them the rest of the way against the strong current. We are finding the downstream voyage seriously challenging and we marvel at the strength and endurance the upstream voyage laden with trade goods would demand.

Pitticow River: An Update from the KI Nation Paddlers, Sep. 1, 2012

Today we passed "the elbow" a series of tight curves in the river just past where the Fawn changes its course from a northeasterly direction to northwest. Near the Fawn's Easternmost point the Pitticow River enters from the east carrying a substantial flow.

Pitticow means something like "short cut." It is the start to a route that can be used to cross over the height of the land and into the Winisk River watershed, the next major river to the east of the Severn.  Beyond the Winisk are the Albany, Attawapiskat, and Moose Rivers, all on a similarly massive scale.

The vastness of the landscape is beginning to set in. We are now approximately 400 km from the nearest road to the south, and still over 100 km from the next village -- Fort Severn on the Hudson's Bay coast. We haven't seen another human soul in nine days, but the signs of Indigenous land use are all around -- recently used camps, fishing nets neatly folded and hanging in trees, and maintained portage trails. 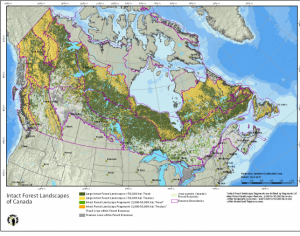 This landscape is remote and intact on the grandest scale, yet is is well known and loved in the culture, memory, and use of the peoples that live here.