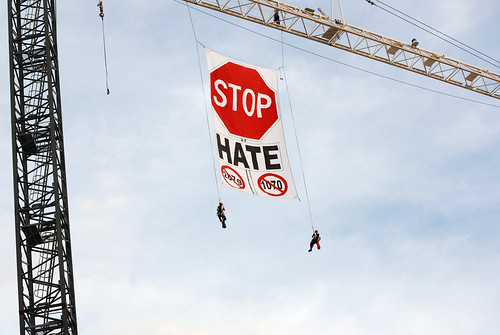 Today, Arizona's "show me your papers" anti-immigrant law goes into effect. Across the country, July 29th has been declared a national day of action for Human Rights. Phoenix is ground zero for the collective outrage and protest that this bill has inspired. Here thousands of people are in the streets, many showing their courage by participating in civil disobedience across the city. In particular, downtown Phoenix has been transformed into a temporary “Human Rights Zone” with public promises from communities, businesses, and police to not comply with the law. It is an inspiring moment of solidarity and protest during a very dark time. Don’t let the partial-injunction fool you, most of this law has been allowed to continue, and we all know there are no half-measures when it comes to human rights. The hate and racism we are seeing in Arizona is only the latest, in a long series of escalating demonization of brown communities.

There is one unlikely group that has joined in protest against the anti-immigrant law: Environmentalists.

As I am practicing civil disobedience in Phoenix today, I’m proud to be a part of the new generation of eco-activists who see the forests for the trees (and the people). We believe the fate of our planet intimately depends on how we treat our brothers and sisters, and that standing up for Immigrant Rights is a central element of our task.

These new environmentalists represent a new way of thinking.  We’re connecting the dots: an ecosystem is your home. Economy is the management of your home. When you globalize your economy, you globalize your ecosystem. Here’s the frank outcome: the ecological systems that support life on our planet have been pushed to the brink by an economy that trashes natural resources and destroys relationships between peoples across the planet in the process. When you convert forests into paper, mountains into coal, and oceans into oil, you force people off their land and deprive those land-based peoples of the resources they depend on to survive. A key lesson from the Environmental Justice movement is that supporting those communities in protecting their land and their livelihoods is one of the most strategic ways to fight the drivers of climate change. The root cause of environmental degradation and climate change is the root cause of forced migration.

Human migration has happened throughout history. Immigration is an ever-present, beautiful fact of Arizona’s history. Migration is not the cause of the climate crisis. But displacement of humans (and the next steps of detention and deportation being put in place by SB1070) will be the result of it.

Those of us who have worked around the United Nations Framework Convention on Climate Change know that half of the UN debates center on “adaptation.” That means finding ways to accommodate the millions of climate refugees forced to find new homes because of the droughts, floods, famines, and destabilization that comprise the climate crisis. Right no the US immigration architecture is being built out. Forward-thinking climate activists know that now is a critical time to ensure that the precedent for immigration policy in this country protects human rights because immigration is going to get a lot more common, not less.

The environmental tradition in the U.S. has a checkered history: it has a great record of supporting wildlife; less great on supporting human communities that belong to these ecosystems. Today’s environmental activist is connecting the dots between people and planet, and standing for human dignity for immigrants in our community is a key part of that. Today is a day for environmentalists to show up.

For information about the vibrant actions taking place today, stay up to date at  www.altoarizona.com and on twitter follow @puenteAZ, @ndlon