I Stand With the Athabasca Chipewyan First Nation 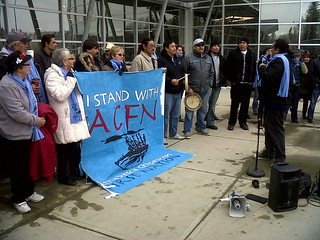 Yesterday was the first stop of our six-community ‘no pipelines, no tankers’ tour: Fort McMurray. All events here are being held at the conference/ sportsplex centre in Macdonald Island Park. The sports centre is the Suncor Sports Centre. It holds a hockey rink, a curling rink, a climbing wall, a huge gym, a basketball court and the Syncrude Water centre, with three Olympic sized pools, and a huge water park. Also houses a library and art gallery. Signs of the different companies are on the different wings - Syncrude, Nexen. Shell has paid to have a whole new wing being built named after it.

We started the day in a courtroom-like room where the Athabasca Chipewyan First Nations is seeking to have the Energy Resources Conservation Board accept to hear a constitutional challenge against the expansion of the Shell Jackpine operation. The ACFN is arguing that the increase in oil production (big enough to supply both the proposed Gateway pipeline and the existing Kinder Morgan pipeline) would destroy water, air and wilderness in a vast area of their territory.

The hearing opened with the clerk “introducing” the attendees to the police and sheriffs in the room and warned that they would not tolerate any disturbances. I was furious as this was clearly aimed at the many First Nations people in the room. I highly doubt he says that to courtrooms full of business suits.

The hearing only took the morning and the decision will be made later this week. Lawyers for Shell did not disagree that this body has the authority to hear these arguments but that it essentially has no authority to act on them which sounded like a trap to me.

At noon, we all went outside to greet a bus load of supporters who had come all the way from Edmonton! We surrounded a sign of support for the ACFN as drummers brought us all together. Then we held a press conference, chaired by Clayton Thomas Mueller of IEN and featuring ACFN Chief Allan Adam, Dene Chief Bill Erasmus and myself.

I brought words of solidarity to this struggle and said this Shell expansion would not only violate the treaty rights of First Nations, but their rights under the UN Declaration on the Rights of Indigenous Peoples and their right to water under the new UN recognition of this right. The press conference ended with prayer and drumming and all were glad to come in from the cold. 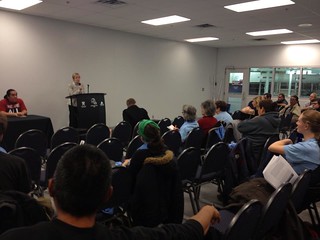 About 65 people were at the evening public forum. Chief Allan spoke about how to find the spiritual resources to keep this fight going. Chief Allan signed two agreements with Shell, 2001 and 2007, but the company violated them. He talked about how deeply sorry he is that he did and how his heart was “torn of his body” when he flew over a tar sands production site and saw how it is ravaging the environment. He said being a leader is very hard because you have to try to find an economic base for your people but when you do and it turns out to be tar sands as we know them now, you are sorry, it is a thankless job. He said he walks and “drums out his sorrow.” He has refused to sign on to this new request for expansion so he is a great hero. It was very moving. Could hear a pin drop in the room.

I spoke about the need to build a coalition of people fighting tar sands at the source and those fighting the pipelines. I talked about Harper and his energy and trade agenda and swore to stay with this fight until it is over.

Clayton Thomas Mueller gave a wonderful speech talking about the first time he visited Fort Chip and how moved he was by it. He talked about social movements and how they (we) are the hope. He is a wonderful speaker and a real leader in our movement and we are lucky to have him.

Great day! So glad I came.

An audio-clip of Maude’s speech last night can be heard at http://goo.gl/2eFpB.