As intense as the first five days were, the next two took me on an amazing journey to the heart of an ancient people fighting to protect 4000 years of tradition and way of life.

Day Six
After leaving the press conference on November 9th, Claudia Campero and I flew to San Luis Potosi in north-central Mexico, a state famous for its gold, silver and copper wealth and waves of mining activities starting with the Spanish from as early as the 1600s. We were met at the airport by several activist/ organisers and set off to visit two communities fighting big Canadian mining companies. 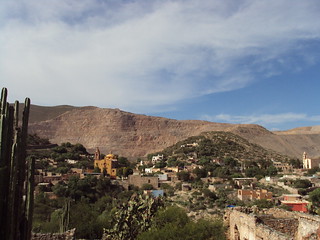 PHOTO: View of the NewGold mine. Behind the old church you see on the left was a mountain. It is gone entirely. The mine backs right into the town.

The first was Cerro de San Pedro, a Spanish colonial settlement whose wealth in gold was compared by the Spaniards to the gold mines of Potosi Bolivia, thought to have enough gold to build a bridge between Bolivia and Spain. The Canadian company NewGold runs the current operation, an open pit mine that razed the mountain that towered behind the 350-year old town and whose loss has completely devastated the community. The company operates 24-hours a day, creating constant noise and traffic and dumps its tailings down the hillside where it has destroyed the local river that supplied the town with its water and replenished the aquifer. It is stunning to see this lovely, traditional old town with its two heritage churches, completely dwarfed by this massive mine operation right up against the town square.

We were taken for a tour by a local long time resident (I am not writing the names of any of the people fighting these mines for their protection) and then had a wonderful home cooked meal at his home with other local residents. They told how they have been attacked by thugs connected to the mine, including some local youths, and even feared for their lives. This is a town trying to stay alive but everything is closed and anyone with enough money has abandoned it.

As we walked through town, I was sure we were being followed and when we left and got into our cars, our guides told us that there were members of the state security forces outside and that the mine had been basically temporarily shut down and the flood lights that normally blind the town at night had been turned off, all to show me that the mine is not disrupting the lives of the community. We drove in the dark in a convoy back to the highway and I had a real taste of the fear that walks beside these brave activists.

We then drove 160 kilometres north through the desert (the stars were startlingly beautiful and clear) to the village of Real de Catorce, located almost 3000 metres up the side of a mountain. To enter the town, we had to go through a 2.4 kilometre tunnel dug through the mountain a century ago.

We stayed in a very special hotel made of stone, tile and wood called El Real and run by Humberto Fernandez and Cornelia Ramseier whose foyer is covered with photographs of movie stars as several well-known movies have been made in this village, including ‘Treasure of the Sierra Madre’ with Humphrey Bogart and ‘The Mexicans’ with Brad Pitt and Julia Roberts. Umberto himself played a pirate in ‘Pirates of the Caribbean’ and there are many photos of his swashbuckling self with Johnny Depp. By now the desert was cold and we were very tired and grateful for beds with warm wool blankets.

PHOTO: On our way to the sacred Wixarita site - the birthplace of the sun.

Saturday morning we bundled up and were taken on a very rare visit to witness a sacred ceremony of the local indigenous people and to start our day together with a spirit journey. The Huichol people have lived in these mountains and deserts of Wirikuta, where they have cultivated crops, tended their sacred sites and gathered their sacred peyote, the magical cactus that guides their path and consciousness. The local Huichol, called Wixarika, have a number of sacred sites for ceremonies, none more important than the “place where the sun was born” and it is to this place that we rode, then walked for hours. I was told that this land must be approached with respect as it can be dangerous to those who don’t understand its power.

As soon as we left the village I felt the power of these hills and what the local people call “an alternative dimension”. Any fear I had being on a horse for the first time in years travelling up rocks beside deep canyons immediately left me and I gave myself and my well-being over to the hills and our guides. I was privileged to be part of a sacred circle of prayer and offerings and was allowed into the small stone holy site where the people chanted and held candles. At the very “centre of the earth” I did truly feel a force and presence and made a vow to try to help save this holy place forever.

PHOTO: In front of a sacred site of offering to the Gods.

Back in the village, we spent the day understanding the crisis the Wixarika people are facing and working to find ways to support them. Mining and its ways are in no way new to these people. Their mountains used to be covered with elm trees and you can see which mountains have been mined and abandoned as they “bleed” white tailing to this day. Scientists have taken samples of the local soil and vegetation and it is still full of harmful toxins. But it is the new threat that has the people desperate for help.

In 2009, First Majestic Silver Corp of Canada purchased underground mineral rights with 80 per cent being in the Wirikuta zone earlier protected as a national sacred site by the State of San Luis Potosi. The Wixarika fought back and through legal action have stalled the company’s operations for the time being. Moreover, the company has agreed not to mine in a number of the sacred areas. However, the people see the steady encroachment of this and other mining companies in the area as well as industrial farming in their traditional hunting grounds and are seeking a decree from the federal government to have the whole of Wirikuta fully protected as a biosphere.

We promised to do all in our power to make this a reality and I return to work on this project all week.

Day Eight
My eighth day in Mexico started early, and we watched the new moon wane and the sun come up on this lovely desert. I return home tired, saddle sore and deeply grateful to have spent the week with extraordinary Mexicans fighting for justice.

Maude Barlow in Mexico to participate in the Permanent Peoples’ Tribunal on the impacts of dams, to visit Real de Catorce where a proposed mine threatens sacred land and local water, and to speak at a public forum in Mexico City on the right to water. Maude’s blogs on days one to six in Mexico can be read at http://canadians.org/blog/?p=17856.