Why even grassfed and local beef isn't sustainable | rabble.ca

Why even grassfed and local beef isn't sustainable

MYTH 1: BEEF PRODUCED FROM GRASS-FED COWS IS BETTER FOR THE ENVIRONMENT THAN GRAIN-FED

It seems logical, doesn’t it? After all, eating grass is natural for a cow. But does that make it better for the environment?

Why wouldn’t you believe the myth when a supposedly authoritative source like the Australian Conservation Foundation says: “When you do buy meat, choose pasture or grass-fed sources over grain-fed ones.” [1]

To my knowledge, the ACF has not cited any sources to support that statement.

Similarly, no sources were cited by prominent climate change activist Bill McKibben of 350.org when he supported the idea of grass-fed cattle over the feedlot variety in his Orion Magazine article of 2010, “The Only Way to Have a Cow“. [2] He was maintaining that position during a speaking tour of Australia in June, 2013. [Footnote 1]

On the other hand, Professor Gidon Eshel of Bard College, Annandale-on-Hudson, New York and formerly of the Department of the Geophysical Sciences, University of Chicago, has reported, “since grazing animals eat mostly cellulose-rich roughage while their feedlot counterparts eat mostly simple sugars whose digestion requires no rumination, the grazing animals emit two to four times as much methane”. [3]

CSIRO scientists subsequently reported some reduction in methane emissions from northern Australian cattle herds, representing around half the country’s cattle population. [5] However, that would still leave grass-fed cows’ methane emissions as a multiple of grain-fed emissions.

What does the FAO say?

In November, 2013, the FAO (Food and Agriculture Organization of the United Nations) reported a signficant difference in the greenhouse gas emissions intensity between beef derived from animals on “grazing” (or “grass-based”) feeding systems and those on “mixed” systems. [6] [7]

The emissions intensity of a product represents the kilograms of CO2-equivalent greenhouse gas emissions per kilogram of product.

It seems reasonable to conclude that the FAO’s “mixed” figures included grain-fed cattle, as it confirmed “grass-based and mixed livestock production systems” are responsible for 100 percent of global beef production. (Reference 7, p. 24).

Cows are not fed grain exclusively. They have not evolved to consume it, and if it used at all, they are generally only “finished” on it for the final one hundred days or so prior to slaughter.

For specialised beef (as opposed to beef from dairy cows), the FAO reported emissions intensity figures of 56.2 for mixed feeding systems and 102.2 from grazing systems.

Those figures were based on carcass weight. If we gross them up to allow for the fact that not all the carcass is used as end product for the dinner table, the figures increase to 77.2 and 140.2 respectively. That’s based on the US Department of Agriculture’s mid-range yield estimate of 72.8% for all beef, including ground beef for use in hamburgers and the like. [8]

We can also gross them up to allow for a 20-year GWP (global warming potential) for methane. Allowing for that factor (refer to additional comments below), the figures increase to 160.1 and 290.9 respectively.

Conventional measures of methane’s global warming impact measure it over a 100-year timeframe. However, methane breaks down relatively quickly in the atmosphere, with much of it doing so within around 12 years. That means the 100-year measure greatly understates its shorter-term impact, as it provides an average figure over a 100-year period, when much of the methane effectively did not exist during the final 88 years. In the chart below, I have used a 20-year GWP of 86 for methane, from the IPCC’s Fifth Assessment Report. It is up from the IPCC’s previous figure of 72, and allows for carbon-climate feedbacks. (Without those feedbacks, the IPCC now uses a figure of 84.) [9]

Researchers at NASA have estimated an even higher 20-year GWP for methane of 105. [10]

Although methane may have a shorter life than carbon dioxide (which remains in the atmosphere for many hundreds of years), its impact can be long-term if it contributes to us reaching tipping points that result in positive feedback loops with potentially irreversible and catastrophic consequences. On the positive side, the relatively short-term nature of methane’s impact means that action on livestock production can be one of the most effective steps available to us in dealing with climate change.

“There is no scientific argument for selecting 100 years compared with other choices (Fuglestvedt et al., 2003; Shine, 2009). The choice of time horizon is a value judgement since it depends on the relative weight assigned to effects at different times.” [11]

Romm went on to say:

“Given that we are approaching real, irreversible tipping points in the climate system, climate studies should, at the very least, include analyses that use this 20-year time horizon.”

I have previously compared beef production to aluminium in order to add some perspective to its emission levels. Aluminium production is an incredibly emissions-intensive process.  In recent times, it has consumed up to 16 percent of Australia’s electricity production [12], for less than: 1 percent of GDP (gross domestic product); and 0.1 percent of jobs.

In a 2003 report commissioned by the former Australian Greenhouse Office, its emissions intensity was reported as 20 kg CO2-e per kg of product. [13] The Australian Aluminium Council has reported a 2011 figure of 15.6 kg (rounded to 16 kg in the table below) for “primary aluminium production, not including emissions from alumina refining which are considered separately”.  [14] It has stated that over 80 percent of smelting’s greenhouse gas emissions are indirect (electricity-related) emissions. The emissions intensity of Australian aluminium is more than twice the global average, due to the heavy reliance on coal-fired power. [15] 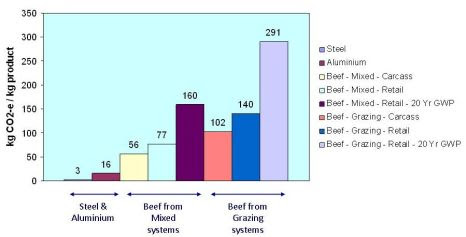 Why wouldn’t you believe this one, when the Australian Conservation Foundation says: “And be sure to support hardworking families in your community by buying from local farmers.”

Similarly, Bill McKibben has said that one of the most important measures for reducing the climate change impact of animal agriculture is to buy locally. He has said that when he’s at home, he tries to eat nothing produced outside the valley in which he lives.

But how effective is that approach in terms of beef?

The following image depicts the FAO’s breakdown of emissions from beef production (including beef from dairy cows), with “postfarm” emissions of 0.5 percent (including transport and processing) highlighted. 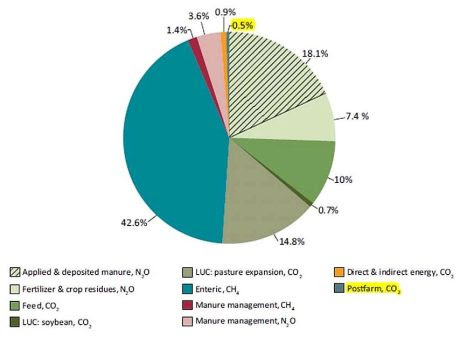 The main contributors are: enteric fermentation (which produces methane in a cow’s digestive system) 42.6%; manure-related emissions 23.1%; land use change through pasture expansion 14.8%; feed 10%; and fertilizer and crop residues 7.4%.

You can focus as much as you like on locally produced meat, but the relative positive impact is negligible.

Vested interest groups attempt to create the impression that beef and other animal products can be produced in an environmentally benign way. In reality, on the scale required to feed the masses, such products are unsustainable. A general shift towards a plant-based diet, along with a move away from fossil fuels, is essential if we are to overcome catastrophic climate change.

I commented on Bill McKibben’s position in my article “Do the math: There are too many cows“. [16] He appeared to be supporting a key proponent of intensive grazing systems, Allan Savory, on whom I commented in my article “Livestock and Climate: Why Allan Savory is not a saviour“. [17] Savory’s methods, even if successful in some situations, would never scale up to the level required.

Paul Mahony is an environmental and animal rights campaigner who is trying to remove what he considers to be blinkers and blindspots in the community, resulting from social, cultural and commercial conditioning. You can find Paul on Twitter, Slideshare, Sribd, Viva la Vegan, Melbourne Pig Save and his own blogging site, Terrastendo.