The subversive terrorist festival featured participants such as [url=http://www.palfest.org/][color=red]M.G. Vassanji and Michael Palin[/color][/url]. Here's what happened:

The week-long festival, supported by the British council and Unesco, has brought several high-profile international authors – among them Henning Mankell, Michael Palin and Ahdaf Soueif – on a speaking tour of Jerusalem and the West Bank.

Shortly before the opening event was due to begin, a squad of around a dozen Israeli border police walked into the Palestinian National Theatre, in east Jerusalem, and ordered it to be closed.

Police brought a letter from the Israeli minister of internal security which said the event could not be held because it was a political activity connected to the Palestinian Authority.

Members of the audience and the eight speakers were ordered to leave, but the event was held several minutes later, on a smaller scale, in the garden of the nearby French Cultural Centre.

Israeli police were deployed on the street outside.

These are actions worthy of Nazis and the hallmark of a society which is on its death-bed.

Here was the impromptu stage set up at the French Cultural Centre after the storm-troopers threw them out of the Palestinian National Theatre. Notice the feeble attempts to disguise the Qassam missiles, RPGs, and suicide bombers' vests: 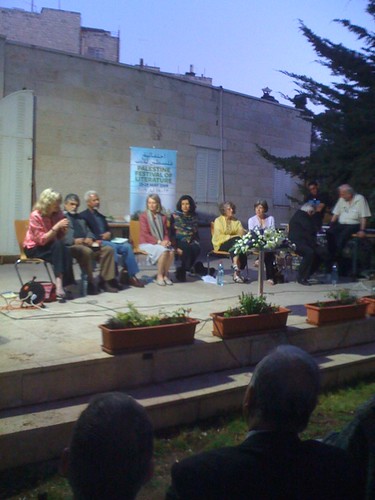 From the above article:

He added that previous Palestinian events in the city, including the press centre for the pope, had been closed under the same policy.

However, Rafiq Husseini, the chief of staff to the Palestinian president, Mahmoud Abbas, who was in last night's audience, was dismissive of the Israeli actions.

"They are creating enemies for themselves."

That would seem to be their intent.

So do I. The best part is that even our resident "Israel can do no wrong" apologists haven't worked out how to spin this yet.

So what else is new?

Quote:
Ghassan Kanafani, the famous Palestinian journalist, novelist, and short story writer, whose writings were deeply rooted in Arab Palestinian culture, inspired a whole generation during and after his lifetime, both in word and deed.

He was born in Acre in the North of Palestine on 9th April 1936 and lived in Jaffa until May 1948, when he was forced to leave with family first to Lebanon and later to Syria. He lived and worked in Damascus, then Kuwait and later in Beirut from 1960 onwards. In July 1972, he and his young niece Lamis were killed by Israeli agents in a car bomb explosion in Beirut.

This is what Israelis do.    It's their heritage.

Don't know about the good omen part.  It depends on what their political system degenerates into - and that might have pretty severe consequences for the Palestinians (as if life has been a picnic so far).

It already has degenerated. They wiped out 1300 Palestinians over Christmas without even batting an eyelash in an entirely casual and open manner. In the past they have at least paid lip service to some kind of standard of conduct.

Some video footage - starts at around 2:00 minutes:

I wonder if Eleanor Wachtel has heard about this.
Today I heard her announce who next week's guest will be:

Eleanor Wachtel speaks with one of Israel's most prominent and influential novelists, A.B. Yehoshua. From Mr. Mani to Friendly Fire, he explores historical and current tensions in Israeli society.

Friendly Fire and A Woman in Jerusalem are published by Harcourt.

Quote:
Israeli police shut down a Palestinian theatre in East Jerusalem on Thursday, forcing foreign writers taking part in an international literature festival to move elsewhere for the second time in a week.[...]

"All cultural events which take place in areas of contention have political undertones," British writer Jeremy Harding said at the theatre after police moved in. "Talking about what literature is and what it means in a fraught political situation is the most honest thing we can do. They didn't like that." [...]

Amal Nashashibi, attending the literature festival, said: "Because of the drive to make the city purely Jewish, they're trying to black out anything that is related to Arab culture."

Dozens of people moved quietly from the theatre to the nearby British Council, one of the sponsors of the festival.

In its second edition, it lists among its patrons the late Palestinian poet Mahmoud Darwish and British playwright Harold Pinter. Both Pinter, who was Jewish, and Darwish were known as critics of Israeli policy. Both died in the past year.

Quote:
Richard Makepeace, the British Consul, went to the theatre for an explanation of the army's actions. He was informed of a court order pinned to the door of the theatre. Having read it, he announced that the event would be held at the British Council. Download the press release here.

[url=http://www.youtube.com/watch?v=Pencxu-SFgY][color=blue]YouTube video of the British Consul announcing he doesn't recognize this "law" and inviting everyone to his place.[/color][/url]

[url=http://kcovaleverydaypeople.blogspot.com/2009/06/burning-books-bebelplat... on The Israeli Army shutting down The Palestine Festival of Literature in the month of May in 2009: Burning Books, A Bebelplatz in Jerusalem[/color][/url]

Quote:
jews love books.
we dress them up
in crowns and gold
breast plates. fine
paper, our finest
calligraphy. our books
live in an ark lit by a flame
that always burns, a metaphor
for a G-d, we don't have
vowels for.

Please read the full poem at the link.