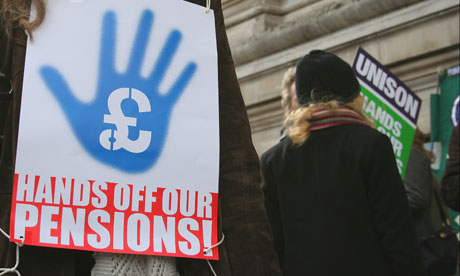 The trade union Unison is preparing to ballot 1.2m state employees for sustained strike action in what would be the strongest industrial act of defiance yet against the government's cuts programme.

Dave Prentis, the general secretary, said his local government and NHS members were moving towards strike action that would see huge swaths of the public sector grind to a halt in the autumn unless the government backs down over pensions.

"Be in no doubt this union is on the road to industrial action in the autumn," he said. "This will not be a one-day action, as we know that will not change anything. This is longer term industrial action to prevent the destruction of public service pension schemes. The only thing that can stop this is if the government allows us to negotiate."

The union has amassed a £30m fighting fund to pay for the campaign, including the £1.2m cost of what is thought to be the biggest strike ballot ever attempted.

Thousands of school and college students are expected to stage walkouts this month as part of a growing wave of occupations and demonstrations planned to support the co-ordinated strike action organised by trade unions.

Students behind last year's demonstrations against cuts to post-16 education are mobilising in schools and further education colleges as part of a wider campaign to turn 30 June into a national day of action against the government's austerity programme....

Stop-Press: There is something we can do to stop the cuts, fight for pensions and save our NHS.

On June 30th over 700,000 people will be taking direct action against the cuts. Public sector workers will be taking to the streets across the country to picket and protest, to defend public services and strike for the alternative. This is the biggest day of action yet against the cuts. UK Uncut are calling for the Big Society Breakfast to support people on the pickets.

The education secretary, Michael Gove, has warned against union "militancy" ahead of a planned walkout by teachers and public sector workers.

Gove said the government was doing everything possible to keep schools open on Thursday, including appealing to parents to help out. He warned the planned action by teaching unions would damage the reputation of the profession and was "premature" as negotiations over controversial pension reforms were taking place.

Quote: On Thursday, up to 750,000 teachers, lecturers, civil servants and other public sector workers take action over and there are threats of further walkouts throughout the summer and autumn.

Speaking on the same programme, shadow cabinet minister Peter Hain declined to urge people to go to work on Thursday and added that they went on strike if they "really think they have got no option".

"Teachers and others are not strike-happy. What this government should do is withdraw their unilateral, reckless attacks on these workers and get round the negotiating table like everyone wants them to do."

Britain: Workers strike back against cuts

Quote: IBTimes.com said on June 20: “The strike is a collaboration between four large public sector unions: the National Union of Teachers; the Association of Teachers and Lecturers; the University and College Union; and the Public and Commercial Services Union (PCS), who says its members ‘are essential to the day-to-day running of the country’.”

Under the proposed pension reform, worker contributions to pensions will rise 50% from 6.4% to 9.8% of salary.

Retirement ages will rise for all state employees. The current age of individual workers determining when they will qualify for their retirement pensions....

Too bad Unison is not considering a political struggle for a legislative (nay, constitutional) ban on employer lockouts in so-called "essential services."  British tred-iunionizm comes up yellow once again.

Army on standby to deliver petrol in event of tanker strike

Hundreds of soldiers are being lined up to stand in for petrol tanker drivers threatening strike action next month.

The Army and police are on standby to ensure fuel deliveries do not grind to a halt resulting in the same chaos that hit Tony Blair's government in 2000.

Cabinet Office minister Francis Maude said the Government had "learnt the lessons" of the past and stood "ready to act" if members of the Unite union walk out.

The results of a strike ballot of 2,000 tanker drivers are expected today and a strike could begin from 3 April....