Rubio looked and sounded like an idiot when he gave the response to Obama's Sate of the Onion.

Clinton could probably win for the Dems.

Start your engines Ladies and Gentlemen, as the jockeying for the pole positions has already begun

I have a link to John Kerry's investments in the tar sands (which he divested as soon as he was confirmed as Hillary's successor), and I'm sure both the Clintons have hugely morally questionable investments as well.

Yeah, I love Elizabeth. Maybe she'll run not next time, but hopefully in 2020. She'll have to be really really good at fund raising, though.

... and I predict your prediction will live up to your user name here...

Maybe Rand will run under the Know Nothing banner.

The Know Nothing was a political movement by the nativist American political faction of the 1850s, characterized by political xenophobia, anti-Catholic sentiment, and occasional bouts of violence against the groups the nativists targeted. It was empowered by popular fears that the country was being subverted by Catholic Americans as well as by new German and Irish Catholic immigrants. In Know-Nothing rhetoric these native and immigrant Catholics were described as hostile to republican values and likely under the control of the Holy See. Enrollment was advertised as limited to Protestant males of British American ancestry, but there were many members of Jewish, Dutch, German, and other backgrounds.

yeah I "know all about it"

Didn't Rand Paul win the straw vote at the Republican CPAC convention on the weekend?

This is how to win elections.

All this crap about compromising with the enemy is exactly that: nonsense. If you are actaully there to win elections you  comprome only when you're back is against the wall, but never before.

How Democrats Got a Spine

The Republican Party taught them how to be uncompromising.

Boehner and his majority are in disarray

A  good friend of mine in the USA is upset because I don't like the idea of Hillary running for the Dems. As if my position matters.

I thought Hillary would be more divisive with the American public than these ppolls show - and I dislike her because she's so militaristic. But some folks really like her, and she has done some work on women's issues. But Hillary Clinton??? Yuck. And she supports Keystone XL, so there goes any environmental cred she might have had.

Clinton's support of Keystone XL will alienate the Dems activist base, while her candidacy motivates the GOP's. Again, the outcome will likely be determined by Independents. Next year's midterm elections will influence momentum towards 2016, I think.

President Barack Obama’s administration, in particular the Department of State, may determine the fate of the pipeline before then. If not, the Keystone XL pipeline issue could harm Clinton’s chances of winning the Democratic nomination because of her ties to the project developer, her support of the pipeline and her apparent willingness to alienate more liberal members of the party who are concerned about the environment.

Bill McKibben, perhaps the most outspoken opponent of the Keystone XL pipeline, has said Clinton believes most voters will have forgotten about her statements in support of the project by the time the campaign begins.

"She doubtless figures four years is a long time, and — even though it’s the one environmental issue in decades that’s brought big crowds of environmentalists into the streets — that voters will forget her stance on the pipeline," McKibben wrote in a 2012 essay for The Daily Beast.

Dec 9, 2012 4:45 AM EST Hillary isn't winning many friends among environmentalists with her support of the Keystone Pipeline--and it will be the purest test of whether Obama's second term will be greener than his first.

Sounds like Gov Christie of NJ bridge fame, is now done as a GOP candidate, so who are they going to get now to run against Hilary? Jeb Bush?

A few boos for Christie at NYC Super Bowl event

And the Democratic National Committee wasted no time piling on.

(By the way, Christie was actually booed at the ‘hand off’ event.)

"At the Palm Springs conference, as the left-behind-list of VIP meetings shows, the Kochs are lining up serious financial firepower for the political fights of 2014 and beyond..."

Rand Paul can get votes from a large cross-section of the demographic. He will get many of his father's suppporters as well. He appears nice and gentle to the average voter. He has carved out a niche as a defender of civil liberties and his foreign policy is among the most progressive in mainstream Washington circles. Hillary Clinton even shares his stance on Iran.

Rand Paul vs. Hillary Clinton? The 2016 Presidential Election Is Likely To Be Radically Transformational

Unfortunately he is a free-market ideologue who will obliterate the "entitlements"... I mean..."social programs" that keep the US from being a 3rd world nation

Well, Ron Paul has a certain base of support but it was never enough to get him elected president and I doubt it will be for his son either.

I actually like many things about Rand Paul. He's great on civil liberties, opposing NSA wiretaps, he's the best mainstream critic of the misguided "war on drugs". Don't agree with him on everything but he's definitely a principled politician compared to most others.

Saw former Republican Florida Governor Crist interviewed By Bill Maher yesterday - the GOP, who are a bunch of scary dudes,  must hate Crist with a passion.

Can't the Democrats find someone in Florida to take on those crazy right-wing bigoted anti-Cuban small in number nutbars in the GOP?

Caught in the act. Bye, bye Governor. You're done like dinner creep!

Will the Republicans go the way of the Whigs?

Hillary Clinton's accused shoe-thrower 'obsessed' with Colorado mass shooter James HolmesAlison Ernst, charged with throwing a sneaker at Clinton during a speech Thursday in Las Vegas, previously made a scene in Colorado at a 2012 hearing for James Holmes, the mass shooter who attacked a movie theater showing a ‘Batman’ movie, killing 12 and wounding 70. Ernst, of Arizona, later filed a lawsuit saying she was obsessed with Holmes and he had invaded her head.

Don’t do it, Hillary! Joining forces with neocons could doom Democrats

Clinton's Iraq vote kept her from the presidency in 2008. Staying hawkish could harm the party for decades. Ask LBJ Who are the Queenmakers?

For at least two years billionaire Haim Saban, has been telling anyone who will listen that a Clinton presidency is "his dream" and "vows full might" to make sure she gets in the WH.

Politics seems almost hell bent on destroying the societies in which we live both in the USA and Canada.

Warren and Paul may point toward a better political future. But a doomed anti-Hillary crusade won't save democracy

“With weeks to go until she makes an announcement about her future, Hillary Clinton has started meeting with a broad range of political figures — including potential campaign managers,” Politico reports.

“Clinton, who several people close to her describe as still not firmly decided on a campaign, met Wednesday with outgoing Democratic Senatorial Campaign Committee executive director Guy Cecil, one of the two people most often described as a potential campaign manager for her 2016 campaign… Clinton has also spoken with Robby Mook, another-often mentioned potential campaign manager, about 2016, people familiar with the discussions said, but the details were unclear.” 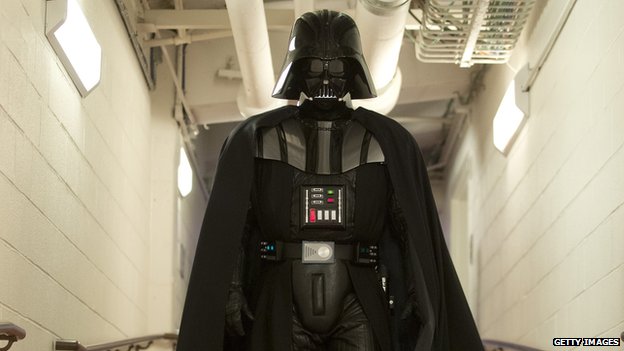 Darth Vader has a higher net favourability rating than every prospective 2016 presidential candidate, including Hillary Clinton

These are the only mentioned potential challengers to Clinton

This is shaping up to be another boring US presidential election with its ensuing useless aftermath.

Don’t Bet On Clinton Faltering In Iowa A Second Time