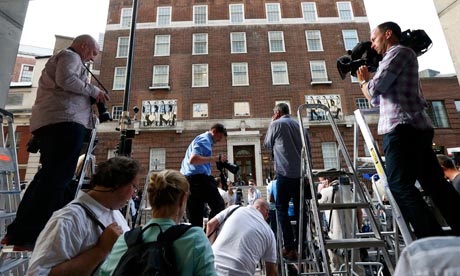 'I've never seen so many cameras'

No such doubts existed among the overseas visitors, of course, for whom an imminent royal birth could almost be seen as a new element to heritage Britain. Jean Menzies, 65, on holiday from Australia with her husband and friends, was impatiently watching an Italian man carrying a large and distinctly eccentric self-made oil painting of Kate with her newborn tell a TV crew he was, at heart, a republican.

"Oh no, we don't agree with any of that," she said, dismissing her own country's flirtation with removing the Queen as its head of state. "I think that's just about fizzled out now. Just a few activists and Labor party types trying to stir things up."

Lest we forget when the royal spark was first kindled:

Did you have to start this thread, Catchfire?

It is the least I can do, Caissa, to introduce a little bit of joy into the bleak lives of HM Canadian subjects. I'm hoping if it's a boy they'll name him Joffrey. Or possibly Crimson.

Well now that you introduced a little joy, you could give me gtreat joy by closing the thread and declaring Babble a Windsor free zone for the rest of the week.

Did you write this article, you royal humbug?

Imprison the Royal Family and Abolish the Monarchy

The Royal Family is no better than a family of mobsters. It sucks its sustenance from the public coffers, enriching itself greatly at the expense of poor taxpaying citizens. It operates not as a meritocracy, but through strict nepotism and strategic alliances. And its strength is a rough measure of the lack of civilization in a particular culture. To be completely clear, we are not suggesting that people should "pay less attention" to the Royal Family, or that the UK should reduce the amount of money it spends on this obscene relic of a brutal monarchical past. We are suggesting that the Royal Family should, as an institution, be completely abolished, and that its remaining members be imprisoned and forced to work for the remainder of their lives to, in some token way, repay the public for all of these years of financial support. Perhaps by making license plates, or breaking rocks.

It is amusing to reflect upon the imperial past of England, and the inherent assumptions of racial and cultural superiority that fueled it, while also noting the fact that the UK still to this very day continues to offer slavish financial, political, and cultural support to a tiny family elite notable for nothing except the lineage of the particular person's vagina from which they slunk. The persistence of the Royal Family, and the worshipful attention that it draws from the British public, is the sort of primitive superstitious voodoo that puts to shame any of the animist rituals that the colonial British would have derided as uncivilized.

That would require me to develop a stance other than abject disinterest.

Maybe babble should have a "Republican?" button like The Guardian does...

BREAKING: The future royal sovereign of Canada is a boy.

Never mind that. Who won the lottery?

If you prefer your British news expunged of all mentions of the new prince, just go to guardian.co.uk and click on the "Republican?" button

Well now that you introduced a little joy, you could give me gtreat joy by closing the thread and declaring Babble a Windsor free zone for the rest of the week.

What did Windsor, Ontario ever do to you?

It is funny listening to this on Radio-Canada, where there seems to be a mandate from above requiring coverage of this non-event, the normal birth of a baby, but the vast majority of the audience is virulently uninterested in the pomp.

A royal baby must have royal poo, royal spittings up, royal crying spats...

Indeed! The Royal Poo Poo does not stink! Even if it does not go through the Colon-ies.

The Windsors/Mountbattens/Battenbergs have servants to Poo Poo for them.  Poo Poo never passes through any of the Royal Systems.

He'll be quite the GAL.