Our beloved friend and comrade Boom Boom deserves his own thread.

I was afraid of this, but so sad that it was confirmed. Glad he can be mourned in the tiny town that adopted him, but at the same time, sad that it means I can't attend the funeral, as I could have done in Québec City.

(having trouble pasting the link on my new laptop...but the story is on NYT and Huff Post(U.S.)sites.)

(again, having cut-and-paste issues, but there are links at most of the major news sites).

"There are some dreams from which it is better not to wake."

My hero. Here's a lesser-known work:

In recent years I have followed the progress on his alternative home more than his music. He was engaged, and a true pioneer in a lot of ways. The most recent news of course was that his partner had passed away only a year or so ago.

Going through his filmography, can't help being baffled at the sheer number of great roles he's played.

Just a year before Philip Seymour Hoffman’s death, philosopher Simon Critchley spoke to the legendary actor about the happiness that eluded him so.

One not to be mourned, but scorned:

Vasily Bilak, the hardline Czechoslovakian Stalinist whose letter to Leonid Brezhnev helped cause the brutal and completely unjustified Warsaw Pact invasion that crushed the "Prague Spring" and thus began the process of destroying support for ANY form of socialism among the peoples of Eastern Europe finally dead at age 96

(link at NY Times website...Babble is STILL not letting me cut-and-paste links, for some reason).

Unless your country was actually under Nazi occupation, there could be no possible excuse for asking another group of countries to invade it.

There was no justification whatsoever in the USSR sending in tanks to prevent the creation of a humane, democratic socialist society in Czechoslovakia.  Nothing Dubcek was doing could possibly have threatened the security of the Soviet Union, and the Warsaw Pact could only have benefited from the end of repression.

What happened in August of 1968 proves that repression in the name of "defending socialism" can never be justified.  Repression in the name of anything else is equally bad too, but the "socialist world" had an obligation to be exemplars of freedom and a humane, civilized form of life that the never, for some twisted reason, fulfilled.

The only hope for the future of any form of socialism is to NEVER, EVER AGAIN use any of the tactics the Stalinists used in the name of "security" and "defending the leading role of the party".

Thanks for the pointer to the Stuart Hall obit - I had not heard the news or seen the obit.  There's a para there that really resonates with me, and evokes memories of the political debates of the times ...

In The Politics of Thatcherism (1983), he [Hall] insisted that the left's traditional statism was in part responsible for creating the conditions that had allowed the Thatcherites to win ascendancy, pointing to the degree to which Thatcherism had rooted itself in authentically popular sentiment – something he believed the left had failed to do. This generated fierce controversy among those who might otherwise have been among his political allies. His conviction that Thatcherism would define the politically possible, long after Thatcher herself had departed, proved enormously prescient, providing a key to understanding the politics not only of New Labour, but also of the subsequent coalition.

The Good Ship Lollispop has sunk.

Tony Benn was probably THE formative political figure of my life: I lived in the UK thru much of the '70s as a student, a time of miner's strikes, enormous class and social tensions, minority Labour Gov'ts and generally declining economic conditions. All of which led eventually into Thatcherism and all that implied.

Tony Benn was a hugely polarising figure - someone who seemed to get more radical in power than out. (Harold Wilson had a classical line about Benn that he was the only person he knew who "immatured" with the passage of time.)  But Benn had a soft and gentle way about him that was matched with a steely mind, and deeply rooted socialist values. And as a speaker he could hold a crowd or a room in his hands. And when he retired from Parliament after 50 years or so, he said he was leaving the House so as he could engage in real politics, for a change. RIP.

With respect, from the Respect Member of Parliament , MP George Galloway, ...

Tony Benn, radical champion for democracy in the UK, dies at 88

"Many years later, as he faced the firing squad, Colonel Aureliano Buendia was to remember that distant afternoon when his father took him to discover ice. At that time, Macondo was a village of twenty adobe houses, built on the bank of a river of clear water that ran along a bed of polished stones, which were white and enormous, like prehistoric eggs...."

Yes, I've been discussing him on several other boards.

I don't really how to react to the physical death of an intellectual whose brain had stopped functioning several years beforehand (kill me, kill me!)

It is poignant, but I was much sadder when the news came that his life as a writer and thinker was over.

No state funeral for the victims of the state.

PS. Never knew he spent the first ten years of his life in Saskatchewan.

I knew Dan Heap had faded away years ago, but the final blow always hits hard (though it is also a mercy). I knew him, long ago. My condolences.

In memory of Dan Heap: 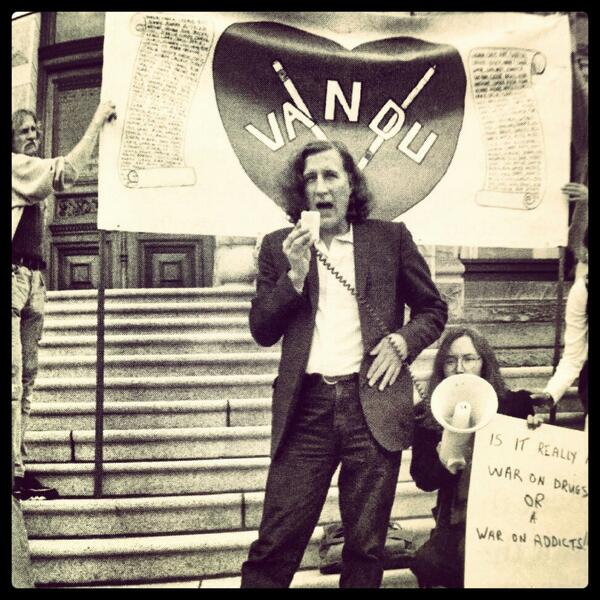 Bud Osborn, poet laureate of the Downtown Eastside, co-founder of VANDU and key figure in establishing InSite, died in his home last night. I had the extreme honour of meeting him and was struck by his intense humility. His selfless dedication to improving the lives of people who used illegal drugs and stopping the displacement of DTES residents is extraordinary. I have taught his poetry in my classrooms and always relish the opportunity to expose students to his work. RIP, Bud.

so here I am

so most days now

shout down this system

puts our souls in prison

shout with our last breath

shout here we are

out of our heads

Some notable political and literary losses this year. Another one to add:

Robert Burns, trade unionist, among the first MNA of the PQ and minister in the first PQ cabinet (and one of the strong voices of the PQ's left wing) — responsible for the 1977 electoral reform banning corporate donations —, labour tribunal judge, etc., died yesterday.

Bärlüer, you've beat me to Robert Burns. Googling "Robert Burns" from here, I get a florilège of the Scottish poet and the Québécois trade unionist, MNA and electoral reformer. I think the two of them would have got on very well.

William Worthy, African-American journalist who defied U.S. travel restrictions to report from Cuba, China and the USSR during the Cold War and had his passport revoked as a result, aged 92:

Here's the musical tribute Phil Ochs wrote about Worthy in the early 1960's:

Two amazing women. Thanks for those links, online.

Here was the episode.

And here's the downloadable podcast (mp3).

"When I grow up I wanna be just like Yuri Kochiyama."

Beloved as a teacher and scholar>

While his credentials were impressive, Macdonald’s real-world influence on the legal profession and, by extension, life in Canada, will undoubtedly be his true legacy. His involvement in the inquiry into Canada’s residential schools paved the way for the 2008 apology from Prime Minister Stephen Harper to the country’s aboriginal peoples. He is also credited for laying the groundwork for same-sex marriage in this country.

Thousands of Canada’s legal professionals (including Brooks and Supreme Court Justice Rosalie Abella) have Macdonald to thank for their education. His approach to the law — not as a top-down system imposed on citizens but as a two-way dialogue — has been adopted by some of Canada’s top Justices and lawyers, and his teaching style has been described by many as unique and effective.

“He had a very different way of thinking,” Brooks explained. “If I went to Rod and said, ‘I’m dealing with problem X,’ instead of giving suggestions about problem X, he’d say: ‘Well why aren’t you thinking about problem Y?’

And here's the man in action for the uninitiated: https://www.youtube.com/watch?v=8Tyg5SJDpiQ

Robin Williams. At 63 of an apparent suicide.

Yes, I'm very sad about Raymond Gravel. If more Churchy types were like him, well, I'd still be an atheist, but I'd have far more respect for them.

God, what age did he start smoking?

The 61-year-old acknowledged not long ago he had smoked for 49 years.

Oh double whammy. I heard the news about Robin Williams when it broke last night. Another young death at 61.

I had no idea Raymond Gravel was ill - in fact I was surprised he wasn't re-elected (perhaps he didn't run) considering he was such an excellent MP. He and Bill Siksay were standouts who embraced the true essence of social activism and justice.

The church ordered him not to run again after he supported Morgentaler's Order of Canada, if I recall correctly.