I mentioned it because the idea was floated that this is just something everyone does, when in fact a lot of it - in music, for example - is outright theft and copyright infringement.

But no, that isn't the only thing that is happening here, and cultural appropriation is about those who have power - the dominant white society - taking from those who do not have power - Indigenous and other cultures - making money off it, and sidelining those who originally created the art.

So no, it isn't a two-way street any more than it is about artistic freedom.

From the Maclean's article posted above:

A constant refrain in this conversation is that all cultures borrow from other cultures, and without “appropriation,” we might not have, say, jazz or rock n’ roll (as if the genres didn’t exist before white artists showed up to profit from them).

Clearly this person has no idea about the history of jazz, or rock and roll for that matter.Which leads one to wonder what other areas in which their knowledge is a bit sparse.

...cultural appropriation is about those who have power - the dominant white society - taking from those who do not have power - Indigenous and other cultures - making money off it, and sidelining those who originally created the art.

There may be a dominant white society, but one of the things we know about society, white or otherwise, is that artists don't dominate. In fact, artists generally, certainly in this society, are looked upon as a bunch of useless drags on the economy. And the fact is that most artists, white black or beige, don't make enough money from their efforts to sustain themselves. One of my favourite jokes is:

'What's the difference between a rock musician and a large pizza? A large pizza can feed a family of four."

The problem is that you (and others) are conflating the art 'industry' with artists. There's a big difference.

I'm not sure why you think the author is wrong, and that argument was just raised in this thread - everyone borrows. That isn't actually the point, because not all people do it without acknowledging the source, and not all cases involve a power imbalance.

And you might want to go back and re-read our conversation. I have been talking about non-white artists being shut out from venues, award shows and airplay, and whitewashing and racist distortions of music. Yes, this also involves individual artists stealing, in part because Mick Jagger not caring who wrote the song (and knowing his white audience is not going to care) is just another example of a systemic problem.

But it is a systemic problem of power and racism, not "can white people play the blues".

I have been talking about non-white artists being shut out from venues, award shows and airplay

Did you read the article I posted...?

I did, and found something interesting:

In this telling, the performance of black music by artists ranging from Pat Boone to John Lennon to Janis Joplin is held as contiguous with a tradition of cultural plunder stretching at least as far back as antebellum blackface minstrelsy. In its most reductive versions—the recurrent “Elvis stole rock and roll” accusation, for instance—this formulation relies on hard-and-fast notions of cultural ownership and racial hermeticism, an ahistorical belief that there is a clear and definable boundary between black music and white music in America that is fundamentally impermeable. This belief does not hold up under basic scrutiny: All musicians are influenced by other musicians, and throughout American history most musicians worth hearing have been influenced by musicians whose skin is a different color than their own.

Apparently you didn't read it.

Here is the sentence right before your quote. It alters the meaning a bit:

Rock and roll became white in large part because of stories people told themselves about it, stories that have come to structure the way we listen to an entire era of sound.

Afer the passage you selected the article then points out other ways in which the whitening of popular music, and the sidelining of non-white artists is denied, or ignored, or blamed on other things.

I've heard enough of the white angst rewriting of history about a West Coast icon who was never a racist and was considered a friend by the actual native people she met. Why do supposed progressive people always attack the allies of indigenous people?

In 1929 Emily Carr (1871 – 1945) was a struggling artist who specialized in painting scenes of First Nations interest. She favoured modern painting styles like post-impressionism in a world that preferred realism. For this reason, her works did not receive critical acclaim until much later in her life.

With her paintings not producing a viable income, she began writing, dog breeding and ran a boarding house. She would travel to First Nations villages all along the Vancouver Island west coast, Haida Gwaii, and up to Alaska.

Along the way she was given the Nuu-chah-nulth name Klee Wyck, meaning ‘the laughing one’. In 1941 she published her first book, named Klee Wyck, a memoir of Carr’s time spent visiting Nuu-chah-nulth communities. The book was a success and went on to win the prestigious Governor Generals' Award and has been in print ever since.

It was during one of her spring sketching trips in 1929 that Carr became inspired by the little white church nestled in the rugged wilderness of Yuquot. Sometime after she returned to her Victoria home she painted her impression of the church with a backdrop of bold, green forest. She omitted the small houses and outbuildings that surrounded the church and opted for white picket fences and crosses, giving the illusion of a cemetery. This was done, it is said, to emphasize the isolation of the church.

She named her painting ‘Indian Church’, which was the common vernacular of the period.

The name stood for nearly 90 years – longer than the church, which burnt down about 30 years after the painting was created.

I'll say it again kropotkin. No one is attacking her, and the observations about her portrayal of Indigenous culture were made by Indigenous people themselves.
I am not sure what white angst you are talking about. I see this as a positive move all around.

6079_Smith_W wrote:
I'll say it again kropotkin. No one is attacking her, and the observations about her portrayal of Indigenous culture were made by Indigenous people themselves. I am not sure what white angst you are talking about. I see this as a positive move all around.

It is obvious that the people whose culture this is did not initiate this name change. They were grateful that at least the white people in Ontario consulted with them after someone in Ontario with no authority to speak on their behalf complained about a part of their cultural heritage. The bizarre thing is that if Emily had named it anything else in 1929 it would have been Church at Friendly Cove.

At their elder’s meeting James said that the people just shake their heads when talking about these things. “An elder made a statement about Columbus looking for India, came across us and called us `Indians`.  We`re not, he said.”

She went on to say that the discussion was short. The elders said this kind of thing has gone on for so long that they wonder, does it really matter anymore?

James says that the museum in Ontario consulted with Mowachaht/Muchalaht First Nation before changing the name of the painting from Indian Church to Church at Yuquot Village. For that, they are grateful.

The idea that the Nuu-chah-nulth people need someone to tell them what is important is ridiculous even more so when it is a white cultural institution with no ties to the West Coast culture and struggles of its people. For those that don't understand UNDRIP came about out of the efforts of this group. I can't imagine why but it seems that other issues were more imortant. Demanding a name change on a painting slipped the minds of the real movers and shakers of the indigenous rights movements and its now left to others to take up the torch. A tip of the hat to the brave activists who can change the channel from stupid talk about native rights and the right to consent to extraction on their territories to whether a white painter who the locals liked should have a painting renamed that hangs in a gallery in Ontario.

The World Council of Indigenous Peoples (WCIP) was a formal international body dedicated to having concepts of aboriginal rights accepted on a worldwide scale. The WCIP had observer status in the United Nations, a secretariat based in Canada and represented over 60,000,000 Indigenous peoples worldwide.

The council dealt with the economic, cultural, political, and social rights of indigenous peoples, along with the retention of their land and natural resources. Before dissolving in 1996 the WCIP was a powerful force for indigenous peoples, giving its members a concrete experience in international politics.

The final international conference was held in Port Alberni, British Columbia, from October 27 - 31st, 1975. It was hosted by the Sheshaht Band of the Nuu-chah-nulth people on reserve land. Representatives were present from the following countries: Argentina, Australia, Bolivia, Canada, Colombia, Ecuador, Finland, Greenland, Guatemala, Mexico, New Zealand, Nicaragua, Norway, Panama, Paraguay, Peru, Sweden, the United States and Venezuela. There were 260 participants, 135 observers, 25 members of the press and 54 staff members present. Each country wore its traditional garb and showed cultural pride through song, dance and ceremony.

The delegates were scheduled to attend 5 workshops, each pertaining to important indigenous issues:

...the article then points out other ways in which the whitening of popular music, and the sidelining of non-white artists is denied, or ignored, or blamed on other things.

But it specifically denies those things were a result of cultural appropriation. As the writer said:

...an ahistorical belief that there is a clear and definable boundary between black music and white music in America that is fundamentally impermeable. This belief does not hold up under basic scrutiny...

You do understand that myth is about ghettoized race music (similar to the articles I posted at 238), don't you?

It is one of the biggest ways in which popular culture sidelined the black artists who pioneered rock and roll, and continues to shut many of them out.

The fact that blues, jazz and rock and roll had players and writers who were both black and white doesn't change the fact that much of it came from a black tradition. And when you have systematic shutting out of those artists, and even whole genres, and re-recording them with white artists, that is erasure and cultural appropriation.

Then you wind up with that 2011 poll mentioned in the article where out of  1043 classic songs, only 22 are by black artists, 16 by Jimi Hendrix.

McGill University students have voted in favour of changing the name shared by the school's varsity men's sports teams, the Redmen, in a move they hope will pressure the university to respond in kind.

On Monday evening, students voted 78.8 per cent in favour of a change.

The non-binding referendum, organized by McGill's student union, collected 5,856 votes — one of the highest participation rates for a vote of its kind at the university.

"Today, as students, we are defending values of respect and inclusion on campus," a statement by the union said, adding it was thrilled by the result.... 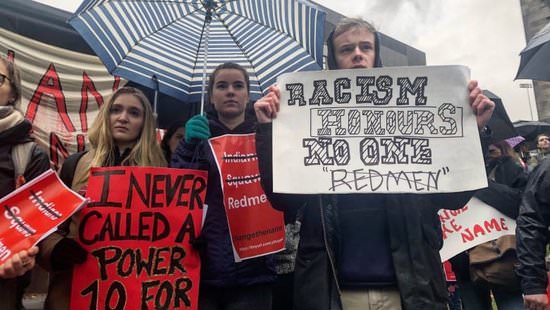