Mueller Will Possibly Testify Before Congress on Wednesday, May 15 | rabble.ca

Mueller Will Possibly Testify Before Congress on Wednesday, May 15

Democratic congressman David Cicilline says on Fox News: ‘We hope that the special counsel will appear’ 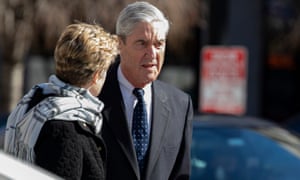 Robert Mueller may be one step closer to being questioned in public on Capitol Hill, with a representative of the special counsel saying he has agreed to testify before Congress, according to a Democratic congressman on Sunday.

Rhode Island congressional Representative David Cicilline said a “tentative date has been set of May 15” for Mueller to testify, he told host Chris Wallace on Fox News Sunday.

“We hope that the special counsel will appear,” he said at first.

Pressed on whether Mueller had actually agreed to testify, he added that “a representative for the special counsel has”.

Cicilline couched his remarks by saying that “obviously”, Congress would not know definitely that Mueller is testifying on this date until the day comes.

Hopefully he will have to explain why so many criminals are walking free.

Seriously.what's he hiding? That he's a career criminal or that he is worth $50,000? Maybe both.

I'd love to see this orange prick in an orange jumpsuit with Eric, Jr , Ivanka and Kushner toute la gang!. Boy what a Celebration day that would be. But the buzzkill is that it will never happen.