On Thursday, October 24, the Alberta government released the provincial budget, which was nothing short of a brutal frontal assault on province’s public services, workers and the poor. The government outlined it would cut program spending by 2.8% over the next four years. This 2.8%, the largest cut to provincial program spending in 25 years, will reduce 7.7% of the public sector in the next four years, resulting in the loss of thousands of jobs.

The UCP budget will also give a 4.5 billion dollar tax cut to the rich and implement the ‘Alberta Job Creation Tax Cut’, which cuts the tax rate for large corporations from twelve to eight percent by 2022. Albertans will pay for these tax cuts in the form of layoffs, austerity and cuts to municipalities, social assistance and other services.

The budget follows the release of last months ‘MacKinnon Panel Report’, an 84-page document with 26 recommendations of how to “balance the budget” by 2023. The report was written by a six-person board made up of former deputy ministers, people from the academic sector, the CEO of ATB financial, and led by former Saskatchewan NDP finance minister Janice MacKinnon. It recommended cutting the operating budget of the province by $600 million a year off the backs of workers through cuts to Alberta’s public services.

The most concerning aspects of the MacKinnon report targeted education, healthcare and social services for cuts and privatization. The budget followed the recommendations of the report specifically related to post-secondary education, which cuts 5.1% across 26 institutions, with plans to link funding to “performance”, ends the five year tuition freeze, increases the cost of student loans, and allows institutions to increase tuition yearly by 7%, which could result in a 21% raise in tuition fees over the next three years. Private Christian post-secondary schools however, will be exempt from the cuts....

This week, the Alberta Court of Queen’s Bench granted advance costs to Beaver Lake Cree Nation to allow it to proceed with its “Tar Sands Trial” treaty case against Canada and Alberta.

It’s a huge breakthrough for a case that’s been called ‘a gamechanger’ for Indigenous rights in Canada. Now, after years of fundraising and pulling funds from critical community development initiatives to fund the case, Beaver Lake Cree will have the majority of the resources they need to mount a vigorous, well-researched case.

Why? Because the Court ruled that a case that aims to determine just what treaties are worth in the face of rapid industrialization is of “national importance”.

With this advance cost award, Beaver Lake Cree Nation will have the financial resources  to pursue a case which could transform “business as usual” in the oil sands, slowing expansion and forcing every project to be evaluated according to impacts on treaty rights of Indigenous Peoples.

The Tar Sands Trial would force regulators to consider cumulative effects of industrial development, including fracking and in-situ oil sands extraction. At its core, the case is about upholding the treaties – which enshrine powerful Indigenous rights – ahead of approving projects, such as tar sands extraction, that could render those rights meaningless.

Today, we are one giant leap closer to setting a legal precedent that will uphold the treaties that this country is founded upon.....

Corporation that received $55 million tax handout from Kenney relocates to the U.S.

Earlier last week, Canadian fossil fuel giant Encana decided to move its corporate headquarters to the United States. Premier Jason Kenney was quick to lay blame on the federal government. Encana’s CEO dismissed the notion that the move was a political decision.

Interestingly, what has been overlooked is the fact that Encana decided to make the transition despite incentives offered by Kenney’s own government.

Earlier this year, Alberta’s United Conservative government rolled out a tax cut for large corporations. The “Job Creation Tax Cut” was meant to appease companies that increasingly see Albertan oil and gas as a bad investment.

According to Encana’s internal documents, the decrease to the corporate tax resulted in them pocketing a cool $55 million.  Their departure from Alberta illustrates why government policy alone does not dictate corporate decision-making. Indeed, Encana’s CEO himself revealed that the move was made in order to tap into greener pastures in the United States.

Kenney had presented himself as the candidate that would return Alberta to an era of prosperity. His corporate tax cut, he promised, would lure investment and retain disgruntled corporations. So far this has not panned out.

and Kenney lol tells Quebec...he is a whack....

He is playing. It is meaningless political theatre. He wanted to get a rise out of Kenny and he did. Interestingly it will play out well in their respective provinces for them.

There will be no new pipeline through Quebec.

Kenney is whacked and over played his hand.

Albertans aren't paying attention to what he said about this.  they are too busy being pissed about the new social conservative back bench bill. michelle rempel has even weighed in on it.

michelle rempel has even weighed in on it.

Did you know there's a $1.6-billion federal bailout package for Alberta's oil industry?

Canada's $1.6-billion bailout package for Alberta's battered oil industry is well underway but with little transparency about who is getting the money and for what.

Almost $1 billion of the package of loans, guarantees and government grants announced last December is in the hands of companies but details are available for just a small fraction of the spending.

Two Alberta petrochemical projects each received $49 million for new facilities to turn propane into a type of plastic, while about $37 million flowed to various oil and gas companies to develop or buy technology to reduce their environmental impact.

The funds are flowing as pressure is mounting on Canadian banks and investment firms to reconsider their backing of fossil-fuel projects as major national banks in Europe have begun to flee the sector, citing climate change risks and a transitioning global economy.

Export Development Canada, which set aside $1 billion in the national bailout for loans and loan guarantees, said earlier this year it was getting out of the coal business but would continue to aid oil and gas companies.....

Alberta’s Minister of Education is receiving low marks for her performance after she offered an anonymous, unverified high school test as proof teachers are engaging in subversive activities.

The antics began when UCP MLA Richard Gotfried told the Alberta Legislature that an unnamed parent sent him a copy of a grade 10 test from an unnamed high school containing “deeply concerning anti-oil and gas rhetoric.”

Gotfried claimed the anonymous test contained unspecified “attacks on capitalism,” including questions that suggest the development of Alberta’s resources could lead to the “destruction” of “forests.” He also said the test promotes the idea of placing unnamed “restrictions” on oil companies.

Reading from a script, LaGrange called the anonymous test “troubling” and asserted that “educators have a duty to tell the truth about our responsible energy industry.”

“This type of ideology has no place in our schools,” the education minister added.

The Alberta Teachers Association, which represents the province’s 40,000 teachers, issued its own statement questioning why LaGrange would not release a full and complete copy of the anonymous test.

The ATA also expressed concern that Kenney’s education minister was trying to “undermine faith in the public education system.”

Albertans are demanding the UCP Government reverse their cruel decision to kick tens of thousands of people off the Seniors Drug Benefit Program in order to pay for a $4.7-billion corporate giveaway.

The cruel Jason Kenney budget passed through the Legislature this fall will cause 46,000 Albertans to lose their drug coverage - Alberta Health officials confirmed this during estimates debate a few weeks ago.....

The province let oil and gas firms create a $100-billion disaster. They expect you to foot the bill. 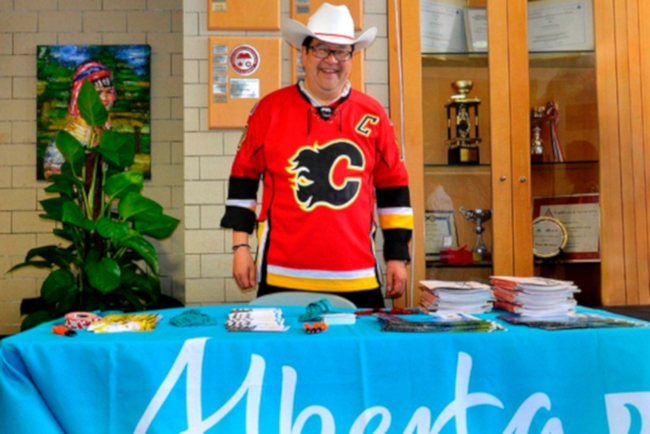 Gary Mar, when an Alberta politician, helped shield the oil and gas industry from having to deal with old, leaking wells. Now as an industry lobbyist, he says all Canadians should pay for the mess.

When Alberta Premier Jason Kenney announced his government would be creating a “war room” during the spring election campaign, a local activist group, Climate Justice Edmonton, saw an opportunity.

The day after the election, on April 17, Climate Justice Edmonton launched its counter-attack — an online fundraising campaign for “A ‘War Room’ to Beat Kenney’s War Room.”

The group’s initial goal was “30 hundred dollars” to combat Kenney’s $30-million investment in the war room. They laid out their plans: town hall meetings to work on a green new deal in Alberta, support for art and high school climate strikes and a “rapid-response fund to protect our allies and frontline communities as they come under attack from Jason Kenney’s politics of austerity and hate.”

There was a poll out yesterday putting Notley’s NDP at 46%, 4 points ahead of the UCP

That's a higher vote share than the party received in 2015.

Wow! I expected that the NDP was well-positioned to land blows against Kenney's UCP, but I didn't think they would take a lead in the polls this quickly. Kenney himself still remains quite popular, but it looks like people don't like what the government is doing and expressing it as such.

Anyways, for now, good job NDP, but there is still a long way to go. The NDP in Saskatchewan led in a couple of polls this term, only to drop back to their historic lows. This is a marathon, not a sprint. Be smart. Talk to people outside your political bubble. Make a compelling case for your principles, and when something is worth fighting for, go all the way, don't back down.

This also has implications for federal politics too. Over the long term, we need to tear down the firewall that Ralph Klein put up. Instead of thinking that it's Alberta and your wins might be confined to a few seats in Edmonton, it's important to look at each riding and clumps of ridings, the demographic make-up, local communities etc, and work with people there to create a platform that speaks to their needs. Could you imagine the shockwaves that would move through federal politics if even half of the seats in Alberta were suddenly in play and the Conservatives could not necessarily take them for granted? On the provincial scene, I was certain the Liberals could keep their Edmoton seats, and also their 2 Calgary seats had the MPs not been discredited, simply because those seats have similar demographic make-up of other left-leaning anti-conservative urban areas in the rest of the country.

That's a higher vote share than the party received in 2015.

Doesn't surprise me. The impression I've got is that swing-voters in Alberta like Notley personally, and are largely okay with the NDP generally, but found one or two aspects of their economic policy unacceptable(and no, I'm not saying that those objections were correct, just that they're a pretty big part of the reality). So I can imagine some of them quite willing to entertain the possibility of returning them to power, if disenchantment with the UCP gets going in a big way.

That said, it's easy for someone with reservations about the NDP to say "Sure, I'd vote NDP, to get rid of that clown Kenney", when that voter won't actually be having to make the decision for another four years or so.