Two pro-choice organizations in Nova Scotia recently ran a successful grassroots campaign to counteract anti-choice advertising on buses in Halifax, raising enough money to produce their own ads for the sexual and reproductive health services that they offer in their clinics. A petition is also calling to remove the anti-choice ads. Their campaign was driven by seeing an uptick in ads presenting misinformation and false claims about the risk of abortion on local transit. But who is behind the anti-choice ads in the first place?

Anti-choice rhetoric: It's all around us

Prominent anti-choice advertising isn't just a regional issue in Halifax. These ads can be seen prominently on buses and billboards across Canada -- you just might not realize what they are because they are crafted to look misleadingly like ads for medical clinics or counselling centres. In reality, these ads are for crisis pregnancy centres (CPCs): stridently anti-choice organizations who present themselves as counselling resources or clinics with the aim of persuading women to continue with their unplanned pregnancies, often through manipulative and coercive tactics.

CPCs are part of well-funded networks with deep pockets that spread their views far and wide; the anti-choice organization LifeCanada boasts a staggering list of cities where you can find their messaging on billboards, leaflets, transit shelters, newspapers and buses. 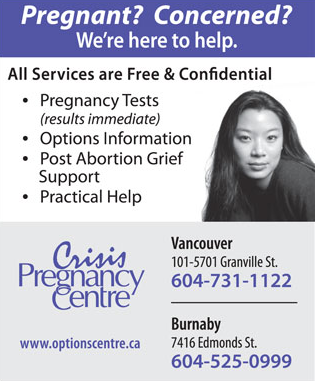 Recent investigations into the practices of the 200+ CPCs in Canada have found that these organizations provide inaccurate medical information about the risks of pregnancy and abortion (such as suggesting that abortions cause infertility and breast cancer). They refuse to provide information about where or how women can obtain abortions; instead, they make claims such as that abortions lead to "an increased statistical likelihood of child abuse" and claim that "pieces of babies" are collected in bins and sold.

Pro-choice organizations, like Options for Sexual Health, caution that CPCs "may use false information about the effects of abortion, ignore your rights and apply religious pressure." But many women facing unplanned pregnancies don't know how spot the difference between an ad for a real clinic and one for a CPC; they don't know where to look for help, and CPCs make themselves very easy to find.

Despite their radical views, CPCs are not fringe organizations; in many parts of Canada, they outnumber real abortion providers by a significant margin. The website Campaign Life Coalition lists seven CPCs in Saskatchewan, a province with zero abortion clinics and only four hospitals that provide abortion services. A woman in PEI who is faced with an unwanted pregnancy has no abortion access in-province, but can visit Birthright International, a religious organization with an anti-choice mandate and more than 300 chapters worldwide. CPCs aren't just a Canadian issue -- they're everywhere.

As one might expect, CPCs tend to have explicitly religious mandates; the Christian Advocacy Society of Vancouver, which runs two CPCs in the area, states on their website "We believe that human beings are made in the image of God. All humankind has intrinsic value and significance from conception to natural death." Religious organizations have the right to their values. But when religious organizations masquerade as service providers to push an agenda that conflicts with the legal rights of women in Canada, then it's a problem.

More insidious is the fact that vulnerable women are being targeted by these ads: women who are concerned or frightened about being pregnant, who don't have a trusted health care provider, who are uninformed about their choices. These women need and deserve real care, not coercion. If they choose to continue their pregnancies, it shouldn't be because they were told that an abortion will cause infertility, or breast cancer, or suicidal thoughts.

Halifax isn't the first city to see pro-choice crusaders making a stand for reproductive rights. In Seattle, thrifty pro-choice advocates simply placed stickers over CPC transit ads that read "This is an anti-choice organization. They will NOT present you with all your legal and medical options" and provided the Planned Parenthood phone number. But what other options exist to combat the pervasive reach of CPCs, and ensure that pregnant women are able to make informed choices and receive comprehensive care?

Grassroots attempts to regulate CPCs have so far been unsuccessful: Joyce Arthur, a pro-choice advocate who was unsuccessfully sued for defamation by two CPCs, has pushed for government to restrict CPCs from providing false medical information, but no regulations or restrictions have been enacted. The Ministry of Health in Ontario have publicly stated that they have no plans to interfere with CPC activities; their recommendation to pregnant women is simply "buyer, beware." But it would be a lot easier to avoid a fake clinic if CPCs weren't allowed to disguise themselves so convincingly.

Advertising anti-choice messaging -- even misleading messaging, like ads that falsely imply CPCs offer medical services or abortion information -- is currently protected in the advertising standards of Canada. But plenty of messages are limited by advertising standards: ads for food, alcohol, cosmetics and prescription medications are all tightly regulated.

Would it be a reasonable imposition to require religious organizations that oppose abortion on moral grounds to disclose in their ads that they will not provide any information about accessing abortion? Or that CPCs display signage explaining that they are not health care providers, and cannot offer medical services or guarantee medically sound advice?

If we can't limit their activities, can't we at least ensure that every woman who walks into a CPC knows up front that she is getting her information from a non-medical professional, potentially with a religious agenda?

It's unfortunately true that not everyone is willing to stand up for reproductive rights; they are devalued and contested in a way that other facets of health are not. After all, it's hard to imagine that a fake clinic would be allowed to operate if it was trying to lure in patients dealing with organ failure or Parkinsons instead of pregnancy. If an organization was spreading misinformation to patients seeking cancer treatment instead of abortion information, would it be tolerated to the same extent?

We expect people to walk all over reproductive rights, and we expect that they'll be allowed to get away with it. Plenty of people do stand up and fight back: they donate their money, and sign their names, and when they see a misleading ad for a CPC, they put a Planned Parenthood sticker over it. Good for them. But we should aspire to more than having pro-choice ads to counter the misleading anti-choice ads. We should aspire to see no misleading anti-choice ads at all.

In 1988, the Tobacco Products Control Act was passed, banning tobacco advertising on the grounds that it was harmful to the health and well-being of Canadians. That same year, Canada's highest court determined that women have the right to decide when and if to bear children, and that abortion, like any other medical procedure, is between a patient and her doctor.

When organizations with opposing views on the right to abortion hash it out in public spaces, it suggests that the right of women to autonomy and self-determination is still up for debate. When will it no longer be the responsibility of pro-choice advocates to remind us of a point that was made more than a quarter century ago?

Michelle Reid is a health researcher, magazine editor and occasional writer living in Vancouver, BC. She is a proud member of the Muskeg Lake Cree Nation but doesn't use that as an excuse to wear headdresses to music festivals. She tweets frequently as @ponymalta