Montreal citizens strike a blow against gentrification with Parc Madeleine-Parent

It was a splendid afternoon in late summer and everyone was smiling. The happy occasion was the inauguration of the Parc Madeleine-Parent in Saint-Henri, just south and west of central Montréal.

Trade unionist, feminist, independentist, pacifist, Madeleine Parent has her park thanks to the determination of the citizens of a working-class district where, in 1943, she started her career as a union organizer at Merchant Cotton (Dominion Textile).

The park is located on the site of a now demolished factory at the corner of St. Patrick and Thomas Keefer Streets, along the Lachine Canal. When the developers who purchased the unused factory submitted a plan to construct two six-story condo buildings on the site, a group of citizens, leery of the gentrification of their neighbourhood, urged the city to preserve the factory building and transform it into a social centre. A less radical group wanted at least to guarantee access to the canal. Instead of blocking the project entirely, mayor Benoît Dorais agreed to the demolition of the factory but proposed as a compromise that the developers construct only one condo building and the city purchase the remaining half of the land for a park. The cost was $1.6 million raised by a special tax levy over a period of four years.

After the acquisition of the land in 2012, two women city councillors proposed that the park be named for Madeleine Parent who, with Kent Rowley, had long resided in the neighbourhood in Ville Émard. Three display columns in the park portray different stages of Madeleine's life.

The inauguration was a festive occasion: four women from the Theatre Exaltemps, dressed as Madeleine would have been at the time, reenacted two interviews with her, one in the 1940s, the other in the 1970s, and charmed the crowd with their singing.

Landscape architect Denis Ashby and technician Justine Desbiens worked wonders with the site. It is aesthetically pleasing and reflects the working-class character of the area: part of the foundation of the defunct factory is there: long picnic tables and benches are reminiscent of factory refectory tables. Two solid ping-pong tables were in use as soon as the ceremony was over.

The park is a marvellous occupation of urban space: on the south and east side, trucks and cars continue their routes; on the north side, in bucolic calm, people are kayaking on the canal, others are using the bike path, while on the pedestrian overpass people are walking over the canal to and from the Atwater market. The initiative of the citizens of the south-west to block the gentrification of their neighbourhood and save this bit of land along the canal is worthy of Madeleine Parent who always believed in the strength of collective action. It is their park as well as hers. 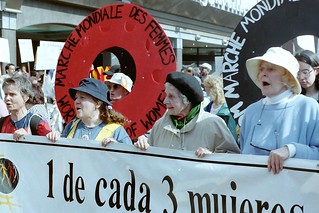