Skip to content
Home » Politics » Canadian Politics » Why is The Hobbit being filmed in the Tar Sands?

Speculation is rife that the Alberta Tar Sands, what Naomi Klein calls the apex of disaster capitalism, will serve as the location for The Hobbit’s Mordor scenes. You can watch what seems to be a Peter Jackson’s video blog here, an Alberta government’s film site here. Already a facebook group has emerged condemning it. (See here)

For those of you just tuning in, The Alberta Tar Sands, or the Alberta Oil Sands are the world’s second largest industrial project where either massive machines rip off the top layer of soil, drill holes in to the ground or inject steam (i.e water), solvents or hot air into these holes, which causes dirty, viscous stuff to rise to the top. This stuff is refined either on site or elsewhere where it’s sent by special pipelines, and then sold. Imagine slicing into the planet, waiting for it to become infected, and then pressing into the infection to drain out the puss, leaving just enough puss for the infection to get worse and spread.

This destructive project has particularly targetted Indigenous communities. “Our lands, bodies, and spirits are intimately connected as Indigenous Peoples,” says Erin Konsmo from the Native Youth Sexual Health Network. “As Indigenous women our bodies and reproductive health are specifically tied to the health of the land- we are both life-givers. The Tar Sands is a specific colonial attack on our bodies as a place where self-determination remains in the community. War on the land is a war on our bodies: ‘place’ is a critical element to reproductive justice.”

And no, this oil is not powering your hospitals and schools – most of the Oil goes directly to the United States and then in to the Pentagon, fuelling the war in Afghanistan, Iraq and elsewhere. Read Naomi Klein`s Baghdad Burns, Calgary Booms and a previous article by Maryam Adrangi and I on the subject.

The destruction is all encompassing – the land populated by Indigenous people is wrecked, the water stolen, and toxins pumped back in to rivers. For those of you who don’t know, Canada is still all Indigenous land, either leased or borrowed by the Queen under particular Treaties or like in the case of British Columbia entirely unceded. The Tar Sands are in violation of Treaty 8 (read more here), and their damaging direct impacts are felt most by Native communities, like when a pipeline burst just days before the Canadian Federal Elections, spilling 4.5 million litres of Tar Sands crude and affluent onto land inhabited by Lubicon First Nations. Read about the Oil Spill here.

Of course, on the bright side, all the most dangerous work is technically not endangering the life of many white Canadians. That’s what migrant workers are for. You know? Those people who have little to no access to healthcare and job security. In 2007, four Chinese migrant workers were injured and two died while working in the Tar Sands, a fact quickly buried away.

A few days ago, the Globe and Mail reported that the Petroleum Human Resources Council is looking to bring in 130,000 new migrant workers to build the Tar Sands and the pipelines. These workers will slave in deplorable conditions, pay in to the Canadian Pension Plan and social welfare but not be able to access any of it. Like the railroads of old that were built by migrant workers across North America paving the way for colonization, the Tar Sands pipelines crisscross the land made with the sweat of migrant workers, destroying indigenous communities.

Now for any of you who have seen The Lord of the Rings or read The Hobbit, you know J.R. Tolkien is pretty racist. Read more here. And so its kind of fitting that a project that so disproportionately impacts people of color and indigenous people could serve as the film set for Tolkien`s racism.

I hear you saying, oh get off it, its just a big Oil field, but imagine an Oil field the size of England, yes the country. Massive. And like an incensed monster on life support, pipes of water, natural gas, and refineries feed in to this megalithic death star, and then pipelines of crude, bitumen and oil leave it crisscrossing North America, and soon after the rest of the world. These pipelines leaving the Tar Sands keep leaking, blowing up, spilling, etc. They include the Trans-Mountain Pipelines (that many people don’t want to talk about), as well as the Keystone, Northern Gateway and others. 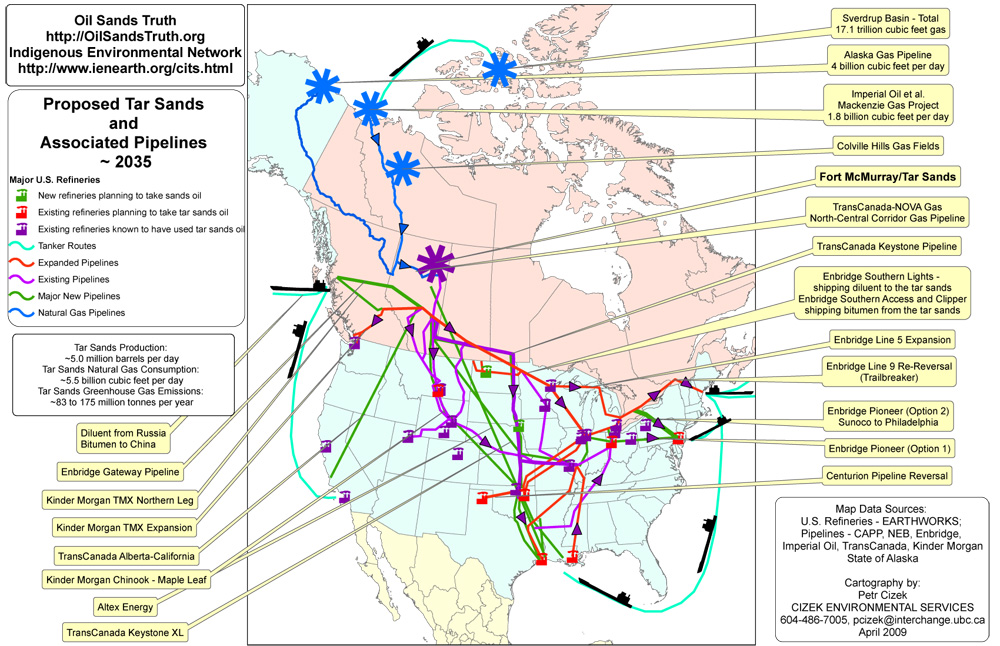 The pipelines, refineries, upgraders that go with a project this size are almost entirely concentrated in people of color and indigenous communities. The White Eagle Community is 6 miles south of Ponca City, and is the home of the Ponca Nation of Oklahoma. After forced removal from their native homelands in Nebraska, the Ponca Tribe was given “Indian Land” in present day Kay County Oklahoma. Over the years, the land base has dwindled to an approximate 10 square mile area, with many outlaying rural residents. Within this 10 square miles lies Conco/Phillips, Continental Carbon Black, Ponca Iron and Metal, a metal smelter, a gravel cleaning facility, many open dumps, and the landfill for the City of Ponca City – all connected to the Tar Sands pipelines. Similarly, Corpus Christi, a primarily people of color and low-income community has struggled for years against the chemical leaks taking place in the giant refineries right next to their communities. Read more about their struggle here,  and an ABC news story on it here.

But people are fighting back against these pipelines and winning. In 2008, Chevron tried to expand its 3,000 acre Oil refinery in Richmond, California to expand its Tar Sands operations. 46% of the adult residents in the city and 17% of the children, mostly people of color, suffer from Asthma. The expansion would have gravely exacerberated the health conditions of the town, which fought to stop the expansion using direct action and grassroots power, and won. Read more here.

Similarly, the Yinka Dene Alliance which includes Nadleh Whut’en, Nak’azdli, Takla Lake, Saik’uz, and Wet’suwet’en First Nations, has put out a Save the Fraser Declaration, uniting over 80 Nations in the Fraser River watershed from the headwaters to the coast banning the transportation of oil sands crude through their territories – vowing to create legal, political and financial risk for the proponents of the Tar Sands. (Read the declaration here)

If the Alberta government is actually in on this, it probably means that they would rather that Indigenous people and people of color become extras in a blockbuster film rather then fight for justice and freedom. And since we don’t really look the part of the western european hobbit folk, I guess we’ll have to just be Uruk-hai. You know the Uruk-hai? The mutant Orc-elf that can walk at day but is born out of the sludge of mordor? But you know an entire army of Uruk-hai with their lives and traditions threatened can be pretty powerful and intimidating.

For those of you that have been reading my previous posts about Alvaro Orozco here and here, his deportation is now set for June 2nd and his friends and supporters are calling for a rally on Tuesday at 11am outside the 519 Community Centre on Chruch Street as well as a Call-Write day on Monday. More details here and here.

Update: This blog post was part of a Yes Men style hoax to raise awareness about the impacts of the Tar Sands.

Syed Hussan is an organizer and writer in Toronto working with undocumented and migrant people, in defense of Indigenous sovereignty, and against counter intuitive programs like war and capitalism.... More by Syed Hussan