Guest blogger Rebekkah Adams helps you do a film project with your group!

Greetings, fabulous educators, artists, and community project people! We are in luck this week, as we have a wonderful Guest Blogger, Rebekkah Adams, a writer, educator, and film maker (bio at the end). So, without further ado, here’s some whys and hows on using film with youth!

Technology pervades our daily lives from our kitchens to our schools. Working on a video project in the classroom can seem like unwanted stress, but really it is the same as any other undertaking. At the most basic level, the process can be split into three phases: pre-production/development, production, and post-production. Each presents unique challenges both within the student body and with the project itself. 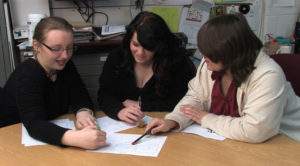 Every good project begins with a plan. While it’s important to allow students to create this plan themselves, it is usually beneficial to have some guidelines for them to follow before script or treatment phase. This can take many forms such as a mandated prop, a first line, a brief story idea, a documentary subject, or a genre. Regardless, while students often complain about the lack of freedom, typically having a framework within which to start helps rather than hurts creativity. Assigning roles at this stage is absolutely essential. No film will get made if every student is vying to be the director or star. Remind participants that it is often the writers and producers who have the most influence over a story.

The type, budget, and level of production equipment will almost certainly guide the entire project. If digital cameras are available, ensure students have basic working knowledge of white balance, focus, and lighting unless you want a series of shorts that are completely unwatchable. A film camera will take more work to learn and the color balance is even trickier, so it’s often best to stick with black and white. While all of these equipment options work very well, even a simple flip phone can be used to shoot entire films. Regardless, the important thing is to allow students to explore and make the most of it. While the technical aspects are important, the story is what will draw audiences in.

Oftentimes, the post phase takes longer for students than all the rest combined. True editors are few and far between, but many 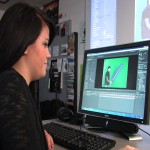 producers and directors work as part of this process. The basic software programs – iMovie, Windows Movie Maker, and Adobe Premiere – are easy to learn and relatively easy to use. However, they do somewhat hinder the editor’s control throughout the process. For example, while in iMovie you can set to pan across an image (often called the Ken Burns Effect), in a program such as Final Cut the editor determines exactly how quickly the shot zooms and pans. The basics work for simple projects and even come with standardvisual and sound filters. As with PowerPoint, avoid excessive use of flashy transitions or silly effects.

Video and film projects can be daunting, but with minor preparation will be a worthwhile experience for students and teachers alike. Remember to start with the basics and work from there, allowing the process to dictate the experience.

BIO: Rebekkah Adams is Holly Adams’ only daughter. She is a writer/editor based in Austin, TX and works both in print and online. After graduating from Ithaca High School, she attended college at the University of Texas at Austin and received a BA in English and BS in Radio-Television-Film. In her free time, Rebekkah volunteers at a local animal shelter and enjoys spending time with her husband and border collie.