'Bloodynosegate' and the distraction from Parliament's climate protests | rabble.ca

'Bloodynosegate' and the distraction from Parliament's climate protests

So by now you've probably heard about the protests on Parliament Hill on Monday, that were focused around climate justice, Indigenous rights, and getting Canada to sign Bill C-311 and the UN Declaration on Indigenous Rights (even though most media, besides APTN, decided this was too much to report). CBC showed the live feed as well. 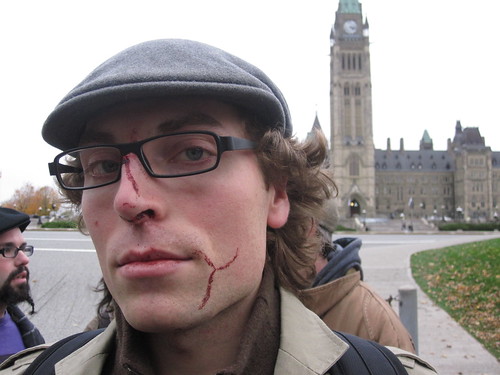 But what has developed since then could only be expected from as corrupt and speculative a media as ours. The whole incident has been diverted away from talk about what these young protestors (news reports put the number as between 100-200) wanted, and more about what their affiliations were, and whether they faked their injuries.

The second claim is very easily verifiable, and would seem beyond real dispute. Not for your intrepid 'media contributors' (journalists seems a stretch) from CBC and the National Post.

The CBC kicked it off with this piece speculating that Mr. Jeh Custer, whose face was smashed into the floor and wall after he was grabbed by security personnel, in fact may have inflicted the wounds on himself for effect. Their proof? A blurred few pixels of Jeh's face, that don't allow us to see the wounds on his face. The final disgrace came with an appearance on Evan Solomon's show, Power and Politics, were they were forced to repeatedly assert (video) that they hadn't made any of this up for effect.

The National Post's Matt Gurney then picked up on this strange line of enquiry to try and discredit protestors, with an article that was originally titled "RCMP Brutally Subjects Climate Protestor to Voodoo Torture" but apparently changed its name and focus to "bloodynosegate". They literally posted a screenshot of the CBC website and went on to make the same tired allegations. The last part of this article makes the allegation that one of the people involved (but not arrested) was an activist for the NDP.

One wonders if Mr. Gurney would be calling this brutal torture, if he wasn't trying to make a mockery of the incident and suggest that the protestors had actually suffered these injuries at the hands of police? Will he and Evan Solomon issue a retraction and apology when evidence shows their positions to be untenable? I emailed Mr. Gurney, and he responded by saying he posted a link to the video on his blog. No apology for the slander, but I'm not holding my breath.

So here's the proof: This video was taken while behind custody of protestor Jeh Custer, clearly showing his wounds. These photos were taken by myself immediately after the protestors were released from custody, and the police and time are both noticeable. Canwest's David Aiken even provides his own confirmation of seeing Jeh bleeding. This should rest any concerns that the injuries were faked.

But of course, you don't have to travel far in the blogosphere to find more allegations and conspiracies. One identified protestor who is a member of the NDP all of a sudden makes the issues irrelevant, makes the violent actions by police justified (or maybe it was Jack who bloodied protestors to further his cause?), and seems to circumscribe the evidence that it was Mr. Layton who was most caught off-guard by the protests, which interrupted his speaking during Question Period. It even became the focus of another question period.

The real purpose of all of this, quite understandably, is to distract and confuse. Maybe the protestors bludgeoned themselves somewhere between leaving police custody and reaching CBC news, two blocks away. Maybe Jack Layton managed to convince dozens of young people - secretly - to rise up during his own speech on pensions, and take over government in a vast socialist plot. Or maybe young people were actually concerned enough to do something an issue they felt deeply about? But people acting on their true feelings is unheard of in Ottawa, so the search continues for another conspirator.

After the incident, a number of youth with affiliation to the Rainforest Action Network, which campaigns across Canada against the Tar Sands, posted their reasons for being part of the protest. The organizers of the Power Shift Conference taking place at the same time have noted that they did not organize the incident. Other protestors have been identified as having no organizational or political affiliation.

What does seem obvious is that the case is much more complex than presented by the media, and not so easily dismissible. The first person to interrupt yelled about the need to sign the UN Declaration on the Rights of Indigenous Peoples. Other demands were made to sign Bill C-311, a climate bill, about shutting down the Tar Sands, in support of climate justice, and more.

Why the cover up? These are serious concerns, and though they weren't delivered in a traditional manner, that doesn't mean we need to or should exclude their validity. But it does threaten the Right, who have responded so viciously by using the media to discredit the claims and voices of dozens of young people who took part in such an action, called the biggest and best organized in parliamentary history.

In the lead up to Copenhagen's UN Climate Conference in December, we may expect to see even more actions like this. The only challenge will be to make sure the media and politicos don't get distracted by blurry pictures and conspiracy theories, and that the urgency of the human and ecological crises are understood and acted upon, on their own merits.