The fight to get Karen Spring into Honduran prison

When I told some friends I was heading down to Honduras to cover some human rights issues, I promised I would try to stay out of jail. Only four days into the country, I would end up breaking that promise -- on purpose.

Karen Spring, originally of Simcoe County, Ontario, is the international coordinator of the Honduras Solidarity Network. Since January 19th of this year, her partner Edwin Espinal has been behind bars in a military-run prison called La Tolva -- a word explained to us as meaning something like a cage. But to really understand his story, we need to go back to 2009. 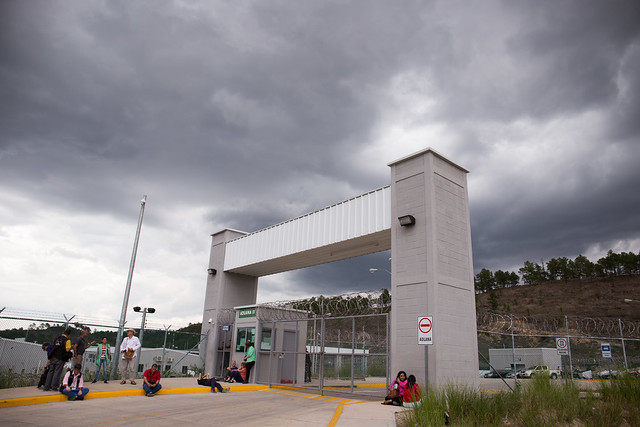 In 2009, Honduras’ centrist government was swept away by a further-right government in a coup. Since then, social movements have faced wave-upon-wave of repression, including many activists and civilians ending up in jails, in hospitals, and even in morgues.

Edwin first became involved in politics following the 2009 coup. During protests against the coup, his then-partner Wendy Avila died from overexposure to tear gas used by the police. Since then, he became heavily involved with social movements pushing back against state and corporate power. Since then, he became a target of the government.

Karen maintains that Edwin’s case is one of the clearest cases of political persecution in the country. In 2010, he was reportedly picked up by police and tortured. In 2013, his house was raided by military police and he was accused of gang involvement and possessing arms -- all of which were disproven in the raid. Then in 2017 he was beaten by police again when working to protect a public soccer field. 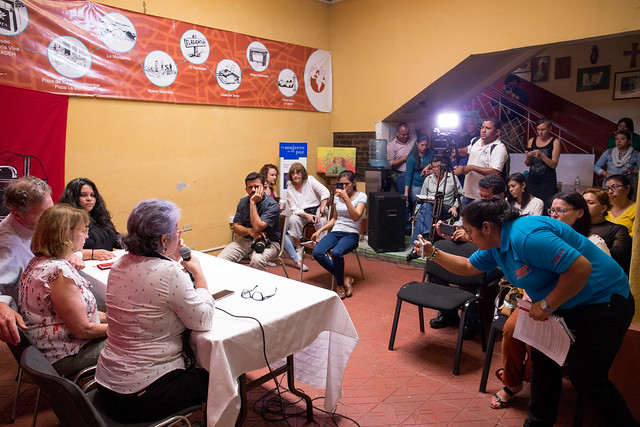 All this time, he would be given charges by the police that weren’t necessarily meant to stick, but to create the impression of criminal involvement. Until the most recent charges – which include arson, destruction of property, and harboring explosive materials – all his charges had been thrown out. This is a tactic used by Honduras against many activists – famously, Indigenous leader Berta Caceres had faced a number of criminal charges intended to stop her from her highly visible activism.

On January 19, Edwin was arrested while driving his motorcycle through Tegucigalpa, the capital for protests on January 12. On the 22nd, the judge reviewed his case and decided he should remain in jail. On the 25th, his defense appealed the entire case, but Honduran law allows the judge to consider the appeal for as long as desired -- all while holding up the original court proceedings -- which the judge has opted to do. Thus far, over four months later, the judge has not issued a ruling on the appeal, and denied him bail at a recent hearing.

The other major irregularity in the case is that under Honduran law, a judge is not supposed to preside over cases against the same person more than once, but the current judge was the same judge who presided over Edwin’s 2013 charges -- and has thus far refused to recuse himself. 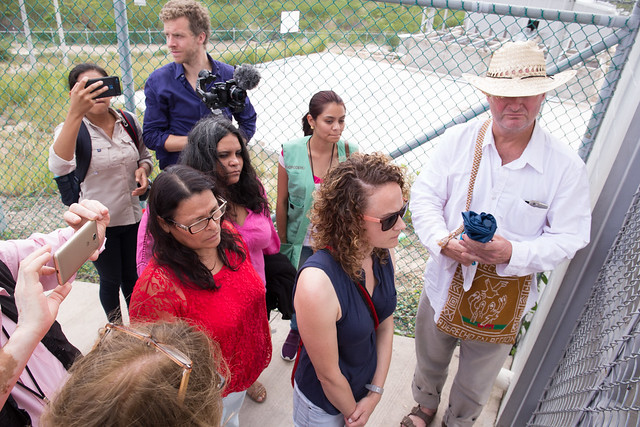 Negotiating with prison officials to attempt to get inside

Our delegation, consisting of seven individuals from the U.S. and Canada, including myself and Karen, arrived in the country on Tuesday, May 22. Immediately, the five members who arrived on the same plane were detained by customs officials and questioned for over three hours. They focused particularly on Karen, asking her questions about her political beliefs, and her partner, before finally allowing the entire delegation to enter, on the condition to not break the law. 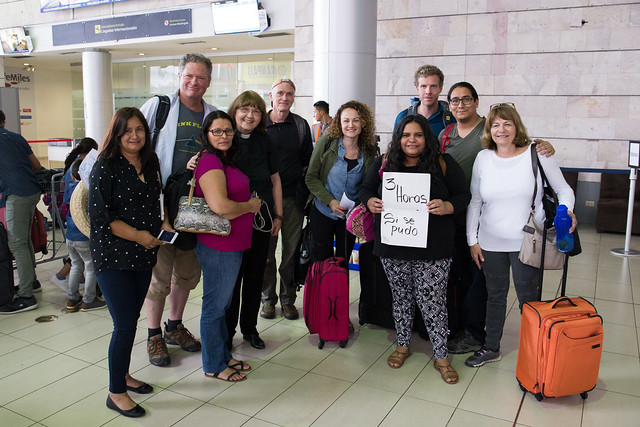 On Wednesday, we drove the 1.5 hours to the prison, to request access from the prison director directly, who can grant that request. We were denied.

By Thursday, we had decided to return, this time inviting local media and human rights groups to join us. First, we proceeded to the National Penitentiary Institute to request special access to the jail. We were told the director was out and wouldn’t be back for hours and that we would have to wait for her. We decided not to and proceeded to the jail – knowing the director could still call the jail whenever we showed up. 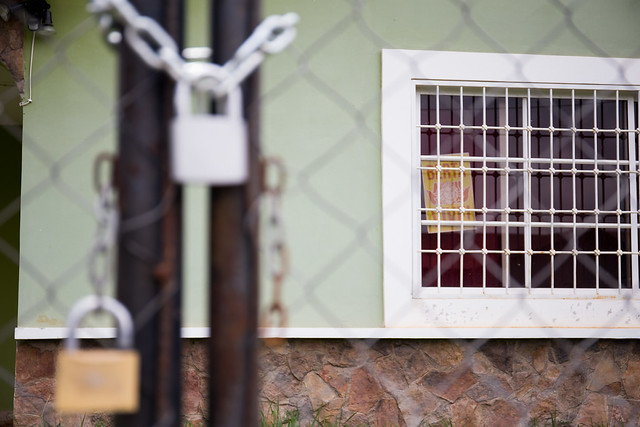 The now-abandoned home of Berta Caceres, where she was murdered. A sign in the window states "Berta Lives"

When we got there, we approached the foreboding gates under a threatening sky. The jail director was gone, and the sub-director was left in charge. For self-professed reasons of security, he and the director both wear full-face balaclava masks -- with an intimidating effect. We made our case to be let in -- but this time accompanied by a contingent of media and human rights observers.

After a terse 1.5 hour negotiation with the sub-director, many felt as if we weren’t going to be allowed in. As we were preparing to walk away, Prisila Alvarado, a local lawyer, talked to the sub-director alone. She implored him to let in Karen’s mother, Janet, who was part of the delegation. For some reason, he decided to listen. Janet would be granted 10 minutes with Edwin. We felt this was a huge success. 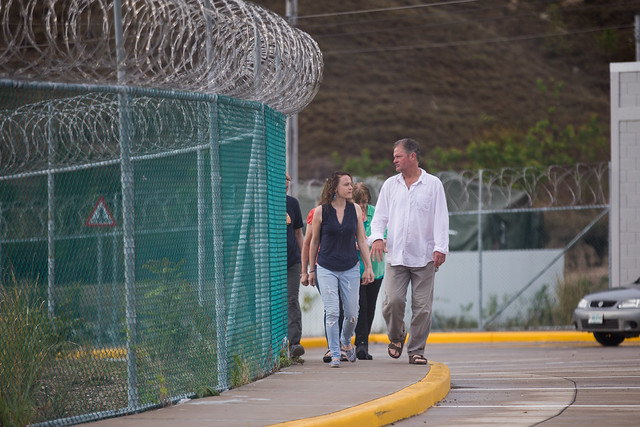 Shortly after, the sky began to open up. Most of our crew sought shelter inside the mini-bus we arrived in, while a few of us huddled under a few umbrellas until the storm became unbearable. Eventually we ended up scrambling for shelter under the bus as well until the storm passed. It was at this moment that the sub-director came back to us with even more good news: he had spoken to the National Penitentiary Institute and would let all seven of us in -- for an entire hour.

Edwin was sanguine, surrounded by us in his loose sweat pants and t-shirt in a large visiting area. He described a plethora of deplorable conditions -- a lack of food, questionable water, only two hours outdoors per month, sleeping essentially on a concrete floor, and complete overcrowding, with nine prisoners in a single cell. Even though this was my first time meeting him, it was obvious his sense of humour was unabated.

“I just want to say thank you all,” Edwin said, gesturing towards us, “and to those outside and internationally for your support. It’s what gives me hope and strength.”

Our hour had finished. Though we were forced to leave Edwin there, we knew we weren’t fully leaving him behind. 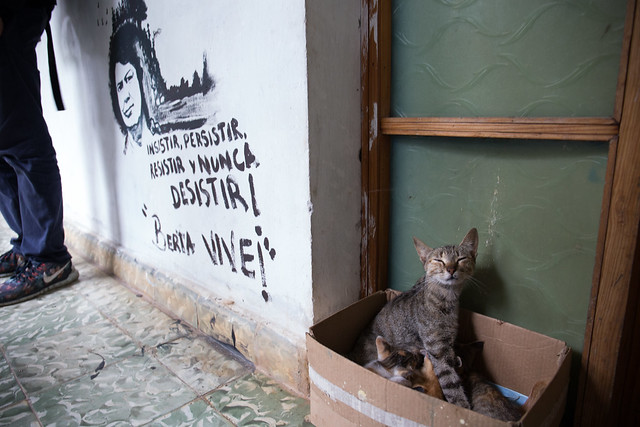 Over the next two days, we had meetings with the Canadian and American embassies, as well as with the UN High Commission on Human Rights, to press the case about the need to have political prisoners let go. We also proceeded to La Esperanza, the home community of Berta Caceres.

We met with her mother and brother there, who shared with us inspirational stories of their own history and legacy of being involved in social movements, the ways that the Honduran government had repeatedly tried to criminalize her work, and their appreciation for all the work Edwin had done to support her and her organization, COPINH. 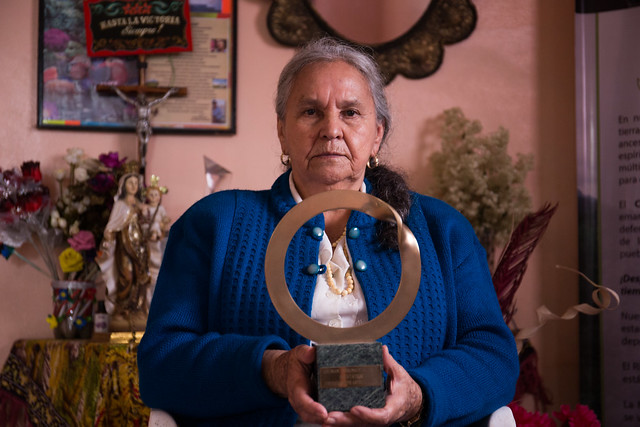 After that, our delegation had to return home. During our final reflection, we talked about how we felt we had punched above our weight and been fairly successful at pushing on the Honduran government, as well as the Canadian and American governments who had supported the coup since the beginning.

As we return to Canada and the US, we will continue to push on our own politicians to do everything they can to pressure the Honduran regime to free all political prisoners, as well as push for an impartial investigation into the murder of Berta Caceres and other activists.

To learn more about the case of Edwin Espinal and other political prisoners, and to take action, please visit this website. 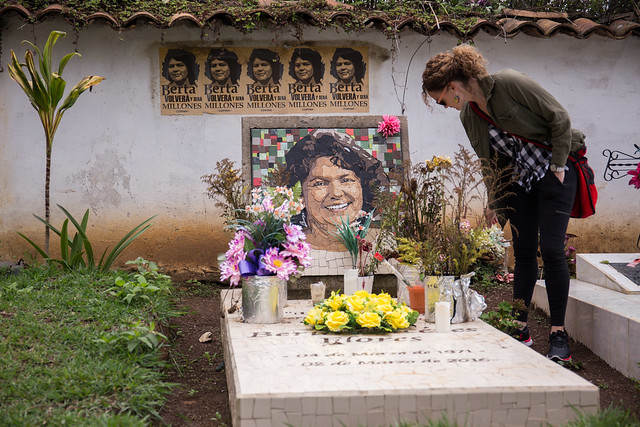