It was a day that represented so much for so many, and seemed to come alive with those expectations. The opening of the World Social Forum yesterday was a day replete with all the energy of one of the Amazon's famous storms combined with the energy of tens of thousands of activists from across Brazil and the rest of the world who descended on the port city of Belem, where the Amazon meets the Atlantic. It's a hot and sweaty city of over a million, bulging with many impoverished areas and many warnings by citizens about the rampant violence and other crime. Seemingly unequipped to handle an event that drew over 100,000 people to this fairly remote part of the world, many of the city's services have suffered in response to a sudden surge in people - from accommodation to transportation. 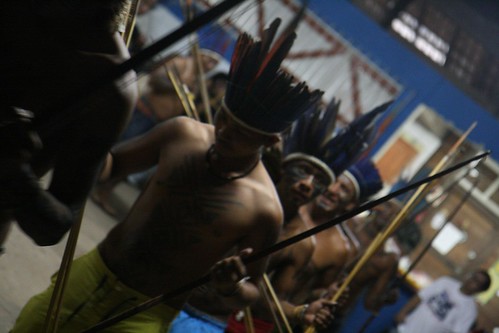 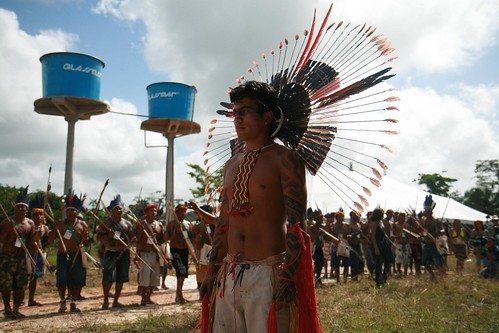 The day opened with a brilliant march by Indigenous representatives from around the world, featuring the presence of many Amazonian peoples. With painted bodies and faces, they attracted the attention of many of the participants, since the average Brazilian would rarely come into contact with a real Indigenous representative. After conducting a number of ceremonies, they marched through the site of the World Social Forum (two university faculties on the edge of town) to a large open field, where they assembled to take an aerial photo, spelling Save the Amazon in Portuguese. It was a tremendous sight as the field filled up with thousands of Indigenous Amazonians, many with bows and spears, an image few news channels could miss that night. 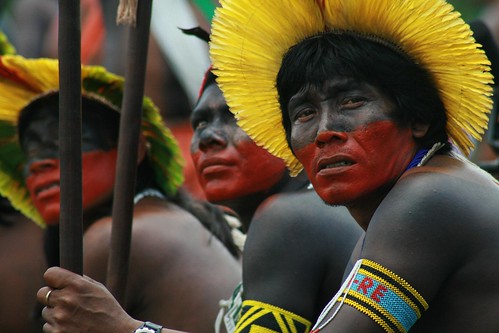 The official march was to start a few hours later in the downtown area. Gradually the streets filled up with thousands of people, many enjoying the music and speeches from a large stand by the waterfront. Then, just as the crowds amassed and began their long journey, the skies opened up. When it rains here, it really pours - being monsoon season in the Amazon. The downpour left just about everyone drenched, but did nothing to stop the energy surging throughout the crowd - in fact the heavy storm only seemed to encourage the marchers to acknowledge and celebrate the struggles of life. Many kept spirits high with an intensity of music, dancing and festivity that Brazil is renowned for. I was happy to still be able to get a few photos before my camera lens started to fog up, and I panicked. The rain only lasted less then two hours, but left many streets flooded and flowing with garbage. People were there representing seemingly every social cause, banners urging support to communist parties to the Palestinian cause to banning nukes. 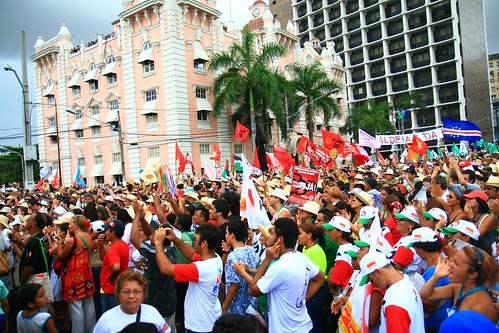 The march, which other media sources and fire officials believe involved over 50, 000 people, lasted about three hours, winding through packed downtown streets. It marked the beginning of six days of meetings, workshops, panels, presentations, and cultural events, as well as a presidential discussion featuring the likes of Presidents Lula of Brazil, Evo Morales of Bolivia, Hugo Chavez, Correa from Ecuador and Lugo from Paraguay. Their event is only one of over two thousand taking place over the packed few days, already causing confusion over which language they will take place - most sessions are in Portuguese, Spanish, English, and lastly, French. They are here organized loosely as an ‘anti-globalization' event, but feature workshops on everything from reforming the financial system to dance-as-activism to protecting the Amazon, a major theme of this year's event. The other goal has been to highlight the plight of Indigenous Peoples, especially those in the Amazon, who have suffered some of the worst and oft-ignored human rights violations in the area. The forum started as an alternative to the Davos Economic Forum, where the world's most rich and influential gather to talk money every year. The message of the Forum has instead focused on social and environmental issues, proclaiming "Another World is Possible" and seeking to connect and inform those committed to building that better world, and bring that message of hope and struggle into the spotlight. 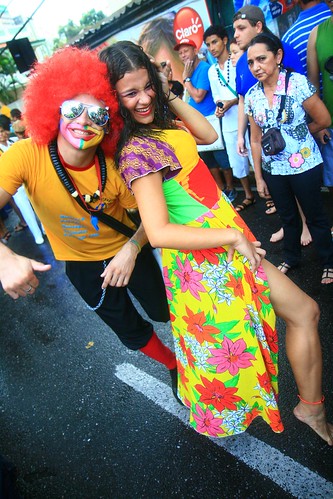 The first actual day of workshops opened up with a bit of confusion. Instead of a series of plenary panel sessions on various issues, participants arrived to find a mixture of dances and cultural performances. Instead, most of us took a chance to watch briefly until the sun and heat became too much, then carry on to other performances. I made my first mistake sitting down in the shade on top of a fire ant colony. I will never sit down again without looking where I'm sitting here in the Amazon. Lunch brought about an unfortunate incident, as an older Brazilian man (who I think was a member of government) came over to procure a picture of a young Masai friend of mine. She declined, as she was eating, and didn't always like the attention, but the man was quite insistent. Soon an argument broke out as to whether or not she had the right to decline a picture, or whether it was just human decency to respect her wishes. We had all hoped for much more from attendees at the forum, but the man only settled down after being chastised by some older Brazilian women. I tried to get onto my laptop in the wifi zone to continue writing this blog, but my efforts were dissuaded by a daily downpour. 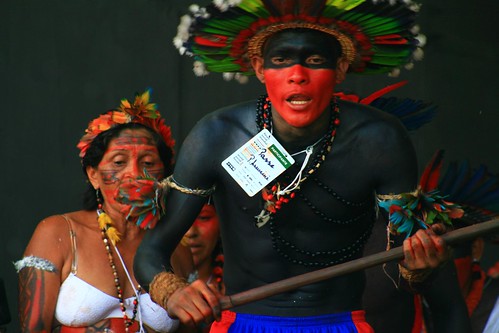 Sessions picked up again in the afternoon, but the vast size of the campus soon became an issue, as it was sometimes necessary to take a 15 minute walk or bus between sessions, sometimes just to find the session had been cancelled or wasn't in your language. This would turn into a recurring theme. I wanted to go to one session on climate change, biodiversity and local development in the Amazon, but was dismayed to find it was being conducted by a bunch of old European men - and the room was too packed anyway. We finally showed up across the campus an hour later at another session, having been briefly distracted by a Brazilian dance show. That night finished off with a discussion on the many problems of carbon trading from a climate justice perspective. Afterwards, I declined a number of invitations to go out, owing to the extreme exhaustion one suffers after a day in 32 degree, 99% humidity weather, and the fact that I was staying over an hour away in one of the worse neighbourhoods of the city, or so the bus drivers warned me. 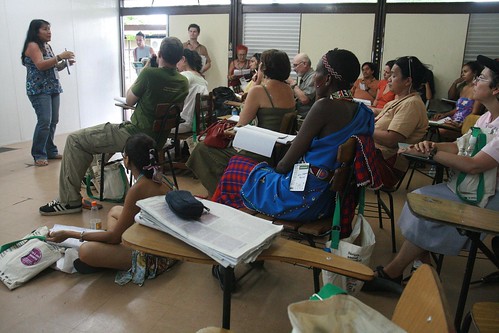