Abuse of process: Bill C-38 and the Harper agenda

BlackOutSpeakOut: Silence is not an option

June 4th, 2012 has the dubious distinction of being BlackOutSpeakOut day across Canada. Spearheaded by the Canadian Association of Physicians for the Environment, the Canadian Parks and Wilderness Society, the David Suzuki Foundation, Ecojustice, Environmental Defence, Equiterre, Greenpeace, Nature Canada, the Pembina Institute, the Sierra Club of Canada, the World Wildlife Fund, and West Coast Environmental Law, together with (at last count) 532 other organizations taking part as partners, they include a veritable who's who of the Canadian environmental movement. One would be hard pressed to find a credible environmental organization in the country that is not participating.

Websites of all of these organizations have gone symbolically "black" for the day with the common message that "Our land, water, and climate are all threatened by the latest federal budget. Proposed changes in the budget bill will weaken environmental laws and silence the voices of those who seek to defend them. Silence is not an option. Speak out today in defence of two core Canadian values: nature and democracy."

It is an extraordinary action of solidarity across an enormous spectrum of organizations and individuals concerned with environmental issues, social and economic justice, and political and electoral reform. As a "temperature check" it is a clear indication that the blood of many Canadians is at the boiling point faced with a unending litany of measures attempting to eviscerate the heart and soul of the tolerant, inclusive, socially and environmentally responsible, peace-loving, non-militarist, just, rational, and democratic Canada that we have imagined our country to be -- and worked for it to become. And all this comes on the heels of National Blackmark Day of Action when citizens from across the county rallied in front of the offices of 54 Conservative Members of Parliament urging them to vote against Bill C-38, a black mark on Canadian democracy. 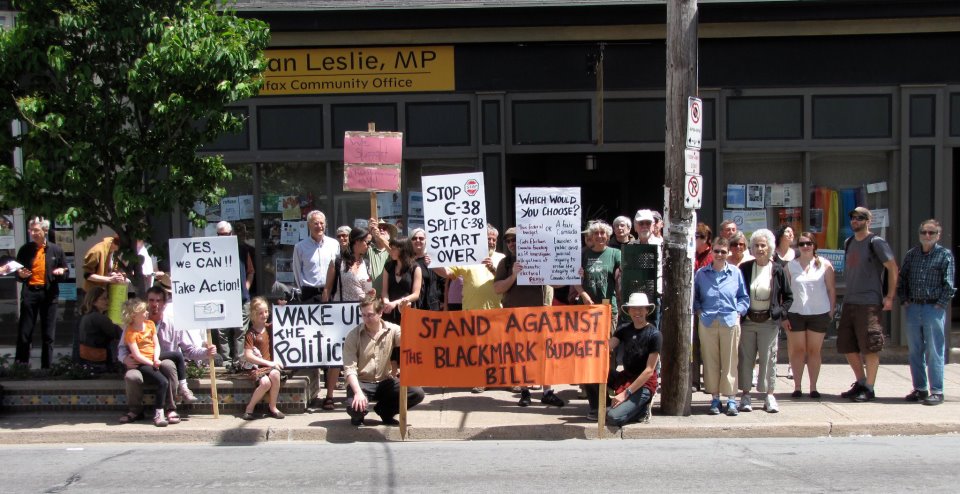 There are a litany of objectionable problems embedded within the 452 pages of Bill C-38, entitled, in the spirit of Orwellian newspeak, as the "Jobs, Growth and Long-term Prosperity Act: An Act to implement certain provisions of the budget tabled in Parliament on March 29, 2012 and other measures." Some of the environmental problems with the bill have been summarized by Ecojustice and Wildsight. The Environmental Assessment Act is being repealed; many provisions of the Environmental Assessment Agency undercut; the Kyoto Protocol Implementation Act killed; the Fisheries Act is being gutted; the Navigable Waters Protection Act weakened to exempt pipelines and power lines; the National Energy Board's reviews will now be subject to reversal by cabinet; the Species at Risk Act is being compromised to allow various exemptions; a fifth of Parks Canada staff are to be cut; the National Round Table on the Environment and Economy is being liquidated; various oil, gas, and nuclear regulations are being made less environmentally rigorous and more industry friendly; Environment Canada's Environmental Effects Monitoring Program will be scaled back and the Municipal Water and Wastewater Survey cut; the list goes on and on. Why the vast majority of these belong in a "budget implementation bill" is anyone's guess. Green party leader Elizabeth May calls Bill C-38 the Environmental Destruction Act.

Bill C-38 will also repeal the Fair Wages and Hours of Labour Act; it will effect health transfers to the provinces to the tune of $31 billion; it will end the Auditor General's oversight of agencies such as the Canadian Food Inspection Agency, the Northern Pipeline Agency, the Canada Revenue Agency; it will liquidate organization such as Rights & Democracy, the National Council of Welfare, and the First Nations Statistical Institute; it will implement contentious changes to Employment Insurance; it will increase the age at which Canadians are eligible for Old Age Security; and remove federal contractors from the protection of the Employment Equity Act; the list goes on and on.

Moreover, as Andrew Coyne wrote in The degradation of Parliament is complete - l'etat, c'est le PMO: "Likewise, the bill [C-38] will quite probably lead to further abuses of power. Contained within it are a number of measures that would take powers that were previously set out in statute, or applied by arms' length regulators, and vest them in cabinet, or in the discretion of individual ministers: the power to define what is "suitable employment" in the employment insurance regulations, for instance, or to create new categories of immigrants; the power to decide whether a particular energy project should be accepted or rejected, over the objections of the National Energy Board. Perhaps these are individually acceptable, perhaps not -- but the more power is centralized in this way, the greater the potential, not just for abuse, but just plain old bad decisions."

Abuse of process: Process of abuse

Dissecting the myriad measures contained in the 452 pages of Bill C-38 is a Herculean task -- and that's the point. The idea of concatenating changes to 70 pieces of legislation (a large number of which have nothing at all to do with the budget) into one massive budget implementation act and then asking Parliamentarians to simply 'take it or leave it' is a fundamental abuse of parliamentary process.

Canadians elect Members of Parliament -- our representatives who make up the government -- to (amongst other things) provide oversight to the legislative process. To debate and discuss proposed legislation, make constructive amendments, and in the end give it their thumbs up or down. Throwing everything -- including the kitchen sink, faucet, and drains -- into one gigantic bill, with a miniscule amount of time to consider it and without the oversight of the many parliamentary committees who would normally consider the individual pieces of this legislation, reduces parliamentary oversight, the role of members of Parliament, and Canadian constitutional democracy, to a hollow shell. It is contemptuous of Canadian citizens and our rights to have a government directed and overseen by our elected representatives. Does democracy matter or not? If so, it needs to be conducted in a sane and rational way, not as a runaway juggernaut forced down the throats of legislators and citizens alike.

This isn't how the Canadian government was conceived by our founding fathers (sadly there were no female faces amongst the Fathers of Confederation), nor how it is practiced in the many countries that have adopted the Westminster tradition of parliamentary democracy. The reason why almost 550 Canadian organizations, are participating in BlackOutSpeakOut is that they recognize what a dreadful abuse of process it is, and what it implies for nature, the environment, and democracy in Canada. In the interests of good governance and healthy democracy there would be no justification for not splitting Bill C-38 into five (or more) separate bills as the NDP proposed. This would allow for an intelligent and intelligible grouping of legislative measures that could be properly and thoroughly examined by respective parliamentary committees with opportunities for amendments and public input. The fact that this is not happening reflects the Harper Conservatives view of "good governance and healthy democracy" -- namely that it ought simply to be dispensed with. 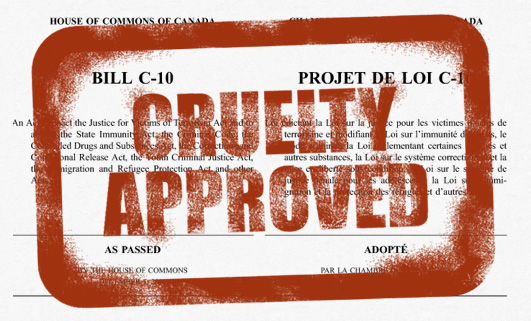 The Harper Conservatives paved the way for such conduct with Bill C-10, the omnibus crime bill (euphemistically titled the "Safe Streets and Communities Act"), a deeply divisive and polarizing bill that included a plethora of legislative measures pertaining to nine different bills, and which was rushed through the House of Commons in March of this year by invoking time allocation to curtail debate. The template was the same: throw together a dog's breakfast of unpopular, counterproductive, and polarizing measures into a shapeless legislative package, limit debate, and force the package into law using an obedient majority of backbenchers whose sole parliamentary purpose is to serve as servile yes-men to the Harper administration.

Andrew Coyne is correct in saying, "In a parliament worthy of the name, aware of its ancient rights and zealous against their encroachment, such a bill could never pass." And that, indeed, is the 'not so hidden' agenda of the Harper Conservatives -- degrade the institution of Canadian parliamentary democracy into a powerless appendage of the PMO, and hope that Canadians will acquiesce. BlackOutSpeakOut is a clear indication that Canadians will not.