Lap dancing is just girls having fun and being sexy, isn't it?

I was walking down the street in London today, all kind of swine fluey and mucousy, when, almost like an apparition from the bottom of my bottle of cough medicine, came marching toward me the only thing that could possibly save a soul as wretched as mine: an earnest, young woman with an Amnesty International flyer.

"Do you think we have a moral obligation to free sex slaves?" she greeted me.

"Look!" she commanded, and she handed me a coaster. 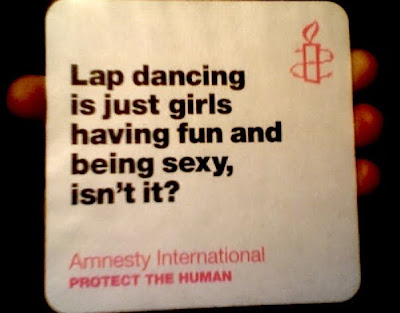 "Lap dancing is just girls having fun and being sexy, isn't it?" read the coaster. It carried Amnesty International's name and some simple instructions: PROTECT THE HUMAN.

Two things popped into my head:

"Turn it over!" she commanded, and she turned it over in my hand for me. 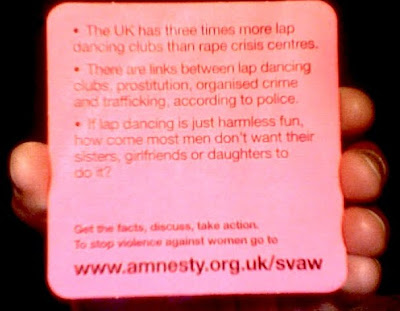 "Did you know that the UK has three times more lap dancing clubs than rape crisis centres?" she asked.

"It does!" she informed.

"So what?? There are links between lap dancing clubs, prostitution, organised crime and trafficking, according to police," she told me.

"I like two of those things very much," I replied. Wait a minute. "According to the police?"

I looked down at the coaster. It had a question for me too: "If lap dancing is just harmless fun, how come most men don't want their sisters, girlfriends or daughters to do it?" Then it told me to "Get the facts, discuss, and take action."

My mind wandered to my warm bed at home and my plans to make a pot of tea using real ginger and lemons, when the earnest apparition asked me a second time: "Do you think we have a moral obligation to free sex slaves?"

I thought for a moment. Actually, I just stood there for longer than a moment and nothing very much passed through my mind except to wonder when and how this phrase "sex slave" came into being anyhow.

I've probably blogged enough about sex work, strippers and trafficking at this point that no one will really get much out of me rehashing all the same opinions. So instead I thought I'd invite a good friend of mine who has been escorting for years and has been a sex worker rights activist for even longer to reply to some of the cunning points Amnesty International makes on their lovely coaster (which, by the way, is doing a fine job protecting my table from my mug of real lemon and ginger tea at the moment, regardless of whether it ever leads to the protection of real, live humans, chained to the floor in some brothel or otherwise).

Let's call my friend "Penelope" for this exercise. Here we go!

Nico: Okay. Penelope, lap dancing is just girls having fun and being sexy, isn't it?

Penelope: Silly rabbit. Lap dancing is a labour to most, and to some, of course, a labour of love. While it is true that the clientele may not see the work as work, per se, or know the different working strategies that dancers must employ, part of the job is making it look like the prancing and giggling is just fun! The truth is that it's hard work! Pole tricks ain’t easy, neither are the stripper shoes you have to wear. Most of us could never be dancers because it’s too difficult!

Penelope: I find the statistic an unnecessary and conceptually misleading comparison that tugs on the heart strings of anyone who is forced (based on the forced correlation) to imagine that all dancers experience rape by virtue of their profession. But it’s an obvious, and rather cheap, tactic that always wins over the hearts of people who fear strippers and seeing sexuality in public, in general. And most do. Actually, I don’t believe that the two statistics have anything to do with one another—but we can always have fun and play the correlation game nonetheless to find a connection with anything! Sort of like 6 degrees of Kevin Bacon. Lets try: We can assume that the existence of strip clubs actually gives people a place to express, not repress, their sexuality, and that reduction in repression means there will be less violence. Not such a bad comparison. But returning to their comparison: the reason it was made to begin with is because dancing, escorting, and other forms of sex work are equated, to the uncreative and colonialist mind, as rape. This isn’t how most people in the industry experience it. Most people in the industry experience sex work as either a form of generated income, a boring job that they need to help raise their family, a fun side gig, or essentially, as a ticket to their independence. In a capitalist world where money is independence, it’s not such a bad gig, so to speak.

Nico: But Penelope, there are links between lap dancing clubs, prostitution, organised crime and trafficking. Amnesty International says so. And their source is the police!

Penelope: Yes, there are links between a lot of things in the world. The idea is not to conflate these ideas and to understand them and their realities. There are also links between prostitution, happiness, marriage, sex, money, hair colour, hamburgers and bubbles. Prostitution does not cause any of these things, nor does it facilitate their existence. If we had laws that did not criminalize prostitutes, most of prostitution would not happen in a world that is unprotected, which would mean that sex workers could openly seek resources and put things into place that would protect them in their work—it would help prostitutes and their collectives identify instances of exploitation, coercion, abuse and crime. As it stands, if prostitution is going to be considered a crime, then of course the links between all crime are going to be made.

Nico: Well here's a hard one for you, Penelope. Though I bet you hear that a lot in your line of work, huh? Huh, Penelope?

Nico: Okay. Penelope, if lap dancing is just harmless fun, how come most men don't want their sisters, girlfriends or daughters to do it? Why aren't we using your real name here, Penelope, if there's no real harm in hiring a pretty escort like you?

Penelope: Loaded. I’ll pick this one apart with you, slowly. We live in a world of double standards. So most people are okay with others doing things, but have a hard time dealing with the multiplicity of realities if they were to deal with it themselves. Remaining anonymous is, for example, one of these complications. Having to hide your identity, hide your earnings, hide your truth from family and friends, is a difficult thing to do. Which is why clients and sex workers alike typically remain anonymous.

With regards to harm -- Don’t confuse where the harm lies: the stigma and discrimination that sex workers experience is definitely harmful! Though the industry itself is not. A lot of people have a lot of assumptions about where dangers lie in the world, usually based on their stereotypes, their fears, their fetishizing and their insecurities. Most people who work in the sex industry will tell you that the industry itself is not dangerous, it’s the laws that cause the harm. It’s the laws that ensure that when sex workers are not protected from violence -- as criminals, sex workers are not considered victims of crime, which means that aggressors take advantage of the laws that criminalize prostitutes. If sex workers had the same labour protections and the protection of human rights, the violence that results from stigma, criminalization and overall moralistic codes would be greatly reduced if not eliminated.

Nico: We're talking about sex slaves here and I said, "...before I let you go." Get it?

Nico: Penelope, do you think we have a moral obligation to free sex slaves?

Penelope: Your question is flawed, dear friend. Obviously it is our responsibility as a society to ensure that we abolish slavery of all kinds. The problem is that people working in the sex industry are being defined as slaves—and it’s a revolting comparison that minimizes the harm of people living and working in slave-like conditions. We have the obligation to respect, protect, and fulfill people’s human and labour rights, but we ought to be careful about defining those rights for people. With global discussions and debates around the birqua, nikab and hijab (which were all being discussed under the rubric of “veils”) people decided what women’s rights look like globally, which, without taking cultural considerations into context, does not exist. Similarly, collective rights are determined often at the expense of individual rights—sex work is an example that has been used in this context for women’s rights on the whole, neglecting to consider that there are a multitude of reasons why men, women, and transsexual people sex work, most of which negate the idea that sex workers are slaves to their own experience. This kind of mentality actually enslaves sex workers more than sex work ever will.

Nico Little updates his personal blog regularly. You can follow it at www.ickaprick.com