In parts one and two of this series I outlined the relationship between economic and food insecurity (it is strong!) and the started unsettling the idea that we can explain food insecurity in terms of food "illiteracy" (no!). Part three, below.

As I mentioned last week, some of the groups talking about food literacy (explicitly or not) are careful to ask why it appears that certain groups are consistently less food secure, and to make that question part of their food literacy curriculum.

Even better would be to question the assumption, which I've repeatedly caught myself making, that low-income people are actually less food literate.

As discussed above, we know that people living on a fixed (and insufficient) income face plenty of additional obstacles to food security.

But are those folks actually and substantially less able and/or interested in cooking than their higher income peers?

As far as I can tell, there is a surprising lack of academic research about this question. We could let this confirm our assumptions: our best and brightest minds haven’t devoted research careers to the question, so it must be beyond debate.

On the other hand, what have low-income people said, when given opportunity to discuss this issue?

In 2012 our food hamper program randomly interviewed 80 people on their "self-rated food skills." I know, small sample size, not statistically significant, yada yada, but people shared their experiences, and a few relevant results stick out.

In other words, roughly two-thirds of respondents were cooking from scratch at least every other day. Most, more.

What sticks out is what you'd probably expect from people who have to carefully budget a meal plan and cannot afford to eat out: they regularly cook from scratch, don’t eat out very often, and have developed many of the skills necessary to make the best of their situation.

I could find one other similar study, this one a larger national survey of low and middle income Americans. Like our survey, this study undermines common stereotypes of low income people, "including that they are frequent consumers of fast food and that they do not eat together often as a family or prioritize healthy eating." Rather, the report, based on interviews with 1,500 low- to middle-income Americans, concludes that those families are "cooking dinner at home, mostly from scratch, and are highly interested in making healthy meals."

Consider the following results: "Eight in 10 families make dinner at home at least five times a week. Most of the time, low-income families are cooking dinners at home, from scratch. They are using easy-to-prepare packaged foods on other nights." Moreover, 61 per cent are making meals from scratch most days of the week, and 85 per cent say eating healthy meals is important to their families. However "families view cost as the primary barrier to healthy eating…Most families are satisfied with their shopping options when it comes to accessing healthy groceries, but many fewer are happy with how much they cost."

Again what you'd expect, right? Those surveyed were not clamoring for education–at least not making that their priority. When they have adequate groceries and facilities, and enough time, most describe feeling comfortable preparing food. The "hierarchy of food needs," below, helps visualize the challenges those folks commonly face. 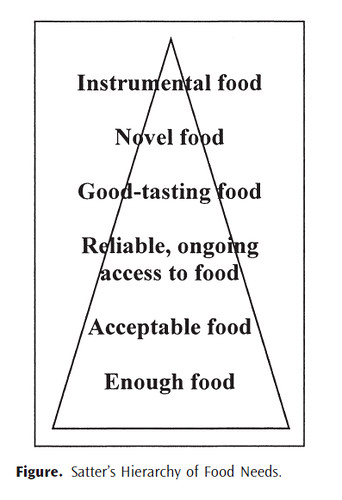 Nonetheless, it is good to learn new ways of preparing and/or preserving food.  And it is good to better understand how we all fit into complicated food systems. But stereotypes -- no matter how convenient now -- are counterproductive in the long term, and make it more difficult to journey in those directions together.  Once we concede that food insecurity is less about literacy, and more about finances (or lack thereof), our responsibilities deepen and expand to working towards better social assistance rates or a guaranteed basic income -- at the very least. These responsibilities are demanding, and implicate upper and middle class families in new and difficult ways.

In the short and medium term, it is vitally important to help people make the most of their situations, whether through $4-per-meal cookbooks or better and compulsory cooking classes in school.

However, we live in the land of plenty. Plenty of food, and plenty of money to establish a  more dignified standard of living for all Canadians.

That being the case, we should never settle, definitely not on strategies that ask people to make due or learn to live with want. When confronted with difficult circumstances, we can lower our expectations, "liberate" ourselves from desires that seem impossible to realize. But how do we know what’s possible? And, as sharper minds than mine have put it, "the logical culmination of the process of destroying everything through which I can possibly be wounded is suicide." In other words, we lower our expectations until we don’t really have anything left to live for.

We all benefit when we refuse to settle.