The revolution will be painted: Cairo street art

A blossoming of street art on the streets of Cairo celebrates the first phase of the Egyptian revolution. But as corporations and the military regime attempt to co-opt and undermine it, graffiti is also reflecting efforts to continue the revolution. 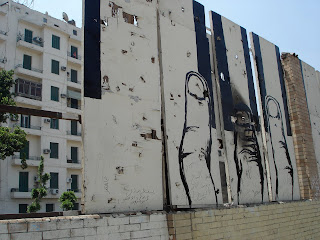 This mural recently appeared in Cairo a few blocks away from Tahrir Square. On a wall scarred by street fights -- punctured with bullet holes and charred by Molotov cocktails -- a piano has emerged. This is reminiscent of a slogan that appeared on the walls of Paris during the uprising in May '68 -- "Sous les pavés, la plage" (Under the paving stones, the beach) -- and speaks to the spirit of collective optimism of the Egyptian revolution, which toppled a tyrant and is creatively reclaiming the streets. 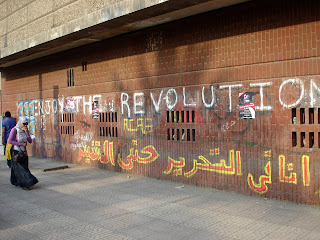 There is also more direct celebrations, like this one in Tahrir Square: "Enjoy the revolution." On the left hand side in faint letters is another message, "long live freedom." This graffiti is not only a celebration but an act of ongoing resistance. As street artist Ganzeer explained, "Creating graffiti involves taking ownership of the streets, just like we did during the uprising. And so of course it's political, and illegal." The wall has also become a place to mobilize for further protests continuing the demands of revolution: it includes posters mobilizing for May Day demonstration for workers rights, and rallies in solidarity with Palestine.

The revolution is not simply about a ballot box -- as Egyptian activists recently explained in a video -- but is about justice, dignity, fair wages, accessible healthcare, and other socioeconomic issues. This is obvious from the new walls of Cairo, where one of the most popular signs on the street art is not the ballot box but the fist -- a sign of united struggle against injustice. The fist appears on many walls of Cairo -- from a stencil showing a red fist (including a cross and a crescent on the fingers) smashing a tank, to a poster for May Day protests -- reflecting the strength of the revolution, from the unity built betweem Muslims and Christians, to the emergence of strikes that finally drove Mubarak from power and that are continuing to push the revolution forward.

Will the revolution be co-opted? 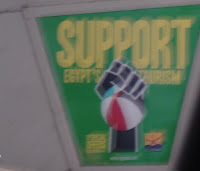 But the military regime and corporations are trying to limit the scope of the revolution to the political reforms that have been won, divorcing them from the social and economic demands that were part and parcel of the revolution and that continue to be raised. The regime is attacking the strength of the revolution -- banning strikes and demonstrations, and overseeing attacks on a women's rights march and the burning of a Coptic church -- yet still claiming the mantle of revolution. While the May Day poster was recently taken down from Tahrir Square, the Egyptian tourism industry has taken up the fist to promote itself. Meanwhile corporations are making use of the revolutionary spirit to market themselves: a mural showing demonstrations rising out of Egypt's flag has been replicated by a Kleenex company. 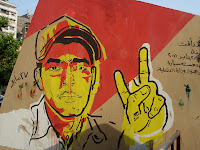 The ongoing revolution -- a battle between the regime and the corporations they serve on the one hand, and ordinary Egyptians on the other -- is reflected on the walls of Cairo over the memory of those who died in the uprising. A mural commemorating the martyr Islam Raafat was erased by the government, prompting outrage over censorship  and a remake of the mural (the photo to the right is the second version). 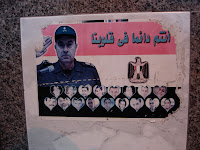 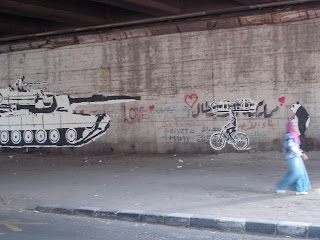 It's in this context that the work of street artists like Ganzeer is so powerful. He has criticized the "mindless nationalism" of some graffiti, and instead used street art to expose the regime and continue the revolution. One of his largest works of street art, under the 6 October Bridge (location of a key point during the uprising when protesters successfully fought back police and joined Tahrir Square), shows a military tank heading towards an Egyptian cyclist carrying a breadbasket. The soldier in the tank has his visor down, a sign of imminent confrontation, while the breadbasket looks like a city full of people. This mural challenges the myth that the people and the army are one, and raises questions over the future of the Egyptian revolution as these two forces -- the people and the military regime -- face a collision course. 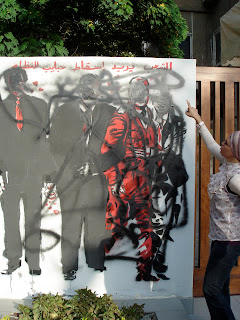 Ganzeer has also been much more direct in criticizing the regime, with this mural -- "the people want to bring down regime lovers." The work (see the original here) features Mubarak arm in arm with Tantawi, the culture minister, and future presidential candidate Amr Moussa -- a visual depiction of the continuity of the Mubarak regime that the revolution has yet to change. No sooner had this appeared that it was defaced. Ganzeer was also arrested after putting up posters depicting someone blindfolded and gagged with the words, "New... the Freedom Mask! Greetings from the Supreme Council of the Armed Forces to the beloved people. Now available in the market for an unlimited time."

While the regime is trying to undermine the revolution, the fact that it must present itself as the defender of the revolution is a sign of weakness. Its caution was on display June 6, on the anniversary of the killing of Khaled Said: when demonstrators covered the Interior Ministry (where the regime tortures dissidents) with stencil's of Khaled's face and even posed for pictures, half a dozen vans full of riot police passively looked on.

Street art, reflecting the political freedoms won during the first phase of the revolution, is raising people's confidence for the second phase. As Egyptian journalist and activist activist Hossam El-Hamalawy wrote in The Guardian,

"This is phase two of the revolution, the phase of socio-economic change. What we need to do now is take Tahrir to the factories, the universities, the workplaces. In every single institution in this country there is a mini-Mubarak who needs to be overthrown."