Organized in just a week, hundreds of people representing a broad layer of the University of Toronto community united for the rally “Defend our education: Support teaching assistants.” As the Governing Council -- the 1 per cent on campus -- met in a private meeting under chandeliers, the 99 per cent on campus rallied outside in the lead up to CUPE 3902’s February 24 strike date. 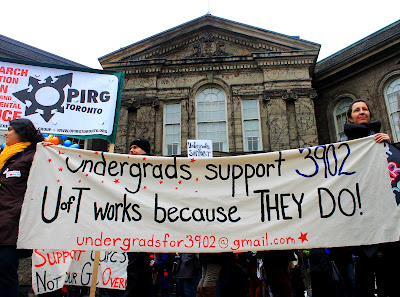 Undergraduates were at the forefront of the rally. CUPE 3902 supported the student day of action against tuition fees, and students are reciprocating. OPIRG-Toronto made a video supporting TA's, and Undergrads for 3902 has organized a letter writing campaign. As one of their members explained, “We need a politics of solidarity. They support us every day of the year, and we need to stand with them when they need us. The interests are not opposed, they are aligned. We will not be crossing the picket line, we will be joining it.” 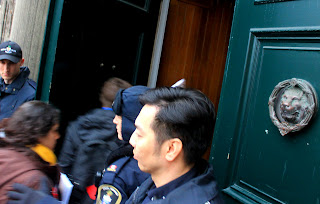 She and others brought 1,000 letters signed by undergrads supporting CUPE 3902, and after demands from the crowd, they were let through a police barrier into Simcoe Hall to deliver the petitions to the Governing Council. Meanwhile CUPE 3902 hoisted a banner on helium balloons up to the window where the Governing Council was meeting. 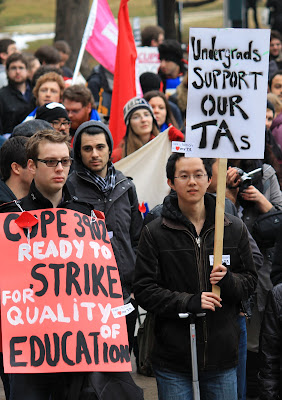 Students wore stickers saying, “I hate my tuition, but I love my TA.” While tuition has been rising, so too have tutorial sizes -- a quarter of TAs have over 50 students, and 100 TAs have over 100 students. This undermines the ability of TAs to respond to undergrads' educational needs, and reducing tutorial and lab sizes is a main demand of CUPE 3902. As an international student and member of CUPE 3902 explained: “We have been reduced to grading machines. If I’m in the fight it’s because I’m concerned about the quality of education at this university.” 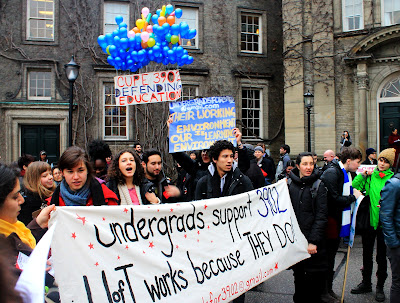 Another placard read “Their working environment is our learning environment." CUPE 3902 is also demanding better graduate student funding, which benefits both grad students and undergrads. Because of insufficient graduate student funding (PhD students only receive funding for four or five years, when it takes an average of six years to complete), grad students need to take on extra jobs, undermining the time they have to devote to research and teaching. For international students who can only legally work on campus, this even threatens their ability to stay in the country. 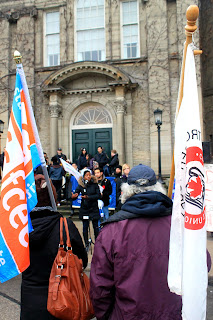 There was support from other unions on campus, including Steelworkers 1998 (administrative and technical workers), Unite HERE 75 (food service workers), CUPE 2484 (childcare workers). There was also a broader support, including a Toronto city worker from CUPE 416, Toronto Steelworkers, CUPE Ontario president Fred Hahn, and Canadian Federation of Students-Ontario chairperson Sandy Hudson -- who led the crowd in chanting, “TAs and lecturers under attack, what do we do: unite, fight back.”

What you can do: