From Inuvik to Vancouver to St. John's, people across Canada rallied today against a looming healthcare catastrophe: cruel and costly cuts to refugee health. In Toronto, more than 500 people took over both sides of the sidewalk outside the immigration office, spilling out into the street and getting solidarity honks from passing drivers. 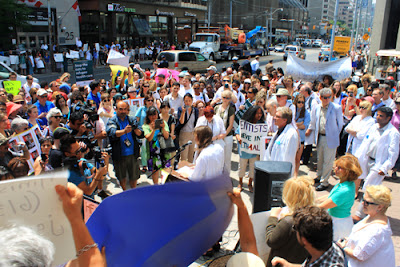 The National Day of Action to Stop Cuts to Refugee Health Care, organized by Doctors for Refugee Care, mobilized the full range of health providers and other supporters of refugees and health care. There were rallies in more than a dozen cities, while the Opposition Immigration Critic Jinny Sims raised the issue in Parliament. 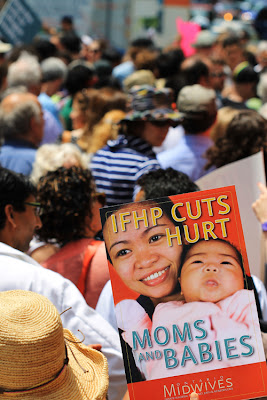 Since these cuts to the Interim Federal Health Program (IFHP) were announced by Immigration Minister Jason Kenney on April 25, there has been a groundswell of opposition. On May 11, physicians protested across the country, including occupying a Tory office in Toronto. The cuts are based on a number of bogus arguments (thoroughly debunked here)--that they will reduce costs, promote fairness, and protect public health. But the cuts will predictably produce the opposite outcomes, which is why they're being imposed. 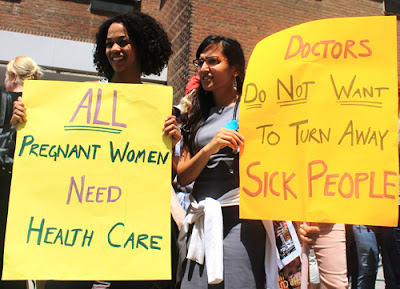 On my way to the rally I met a refugee and mother of three who is scared of losing access to her life-saving dialysis treatment. Denying basic medical care to people who have fled war, torture, rape and persecution is both cruel, costly (forcing expensive ER visits with complications of untreated conditions) and dangerous. These cuts will kill. 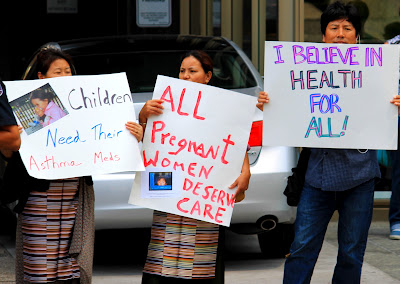 If the Tories were so concerned about health equity, why not promote health for all? Instead, just a few months ago the Tories announced $21 billion cuts to health care--as part of a prescription for privatization. Austerity requires scapegoats, so the Tories are blaming refugees and the small IFHP program that covers their basic healthcare. As Dr. Mark Tyndall said at the Ottawa press conference today, "the government has used this issue to divide Canadians, pitting those who are dissatisfied with their own health coverage against refugees. Canadians are smarter than this. This is an attack on our entire healthcare system." That hundreds of healthcare providers rallied on a monday afternoon shows how the government's attempts to whip up anti-immigrant hysteria is backfiring, and opposition to austerity is growing. The cuts are also exposing the government's other priorities--from prisons to fighter jets--which are consuming billions of dollars diverted from healthcare. 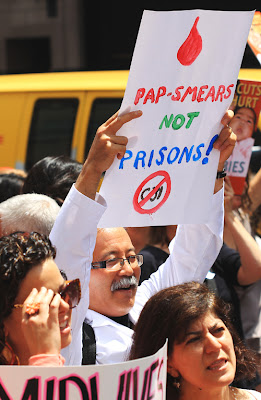 As many of the placards said at the Toronto rally, call or email Jason Kenney at 613-992-2235 or [email protected]--to demand healthcare for refugees, stop the cuts now! 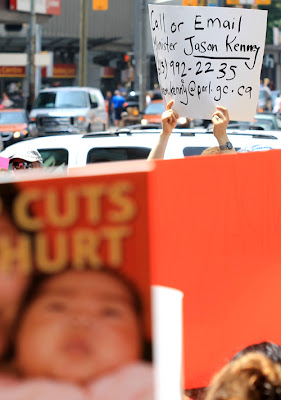