While they are, sadly, all-too often successful, cynical political maneuvers do sometimes come back to bite their practitioners in the ass. And that is exactly what has happened this week to Stephen Harper and the Conservative re-election campaign.

Hoping to take advantage of deeper Conservative pockets, Harper called what was by far the longest election in modern Canadian political history and at the halfway mark, in a campaign that during a normal length election would have already ended, is beginning to be deluged by one damaging revelation or action after another by Conservative candidates or people associated with them.

This is especially ironic as the Conservatives charged out of the gate using "gotcha" political tactics by, for example, taking the quotes of opponent's candidates out of context or using comments they made as teenagers against them.

The wheels have begun to come off the Conservative bus -- prompting some clever person out there on the internet to even fake a widely shared and very funny picture purporting to show literally that! 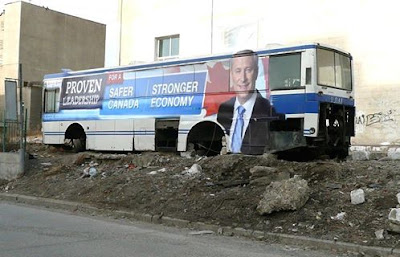 Among the avalanche of bad news is:

This series of actions and comments that are some combination of crude, ugly, idiotic, racist, sexist or homophobic also serves to reinforce the picture of the Conservative mentality that came into focus during the same week that saw the Syrian refugee crisis explode onto the Canadian election scene after the death of toddler Alan Kurdi.

The Conservative response, from Chris Alexander's disastrous interview with Rosemary Barton, to Conservative efforts to obfuscate and distort what has, in fact, been their appalling record with regards to helping Syrian refugees find safety in Canada, to the almost unbelievably vile cry of "How many kids drowned in pools in Canada since last summer? Do you blame the government for that?" from a Conservative heckler trying to drown out a reporter's questions, has truly laid bare what the party and the government is really all about and what types of mindsets and mentalities can be rather easily found in abundance among its MPs, candidates and supporters.

As a result of all of these factors the Conservative campaign, despite originally being so tightly scripted and managed and despite its fear-mongering, has begun to tank and the odds of its re-election are becoming smaller everyday.

It should, then. come as no surprise that to help reinvigorate his slumping campaign Harper has turned to an Australian strategist, Lynton Crosby, who Joan Bryden of the Canadian Press labelled...a master of "dog whistle politics,"

Of course he would. And we can anticipate that the rhetoric of fear, loathing and division will be ramped up to an ever higher fever pitch as election day approaches.