Skip to content
Home » Environment » Dear Enbridge: ‘I will never allow you to make me your token native poster boy again’

This is what Trevor Jang, a Wet’suwet’en youth said to Enbridge CEO Al Monaco yesterday at the Enbridge AGM in Calgary.

When Trevor was 16, he won the Canadian Aboriginal Writing Challenge which Enbridge sponsors. At the time, he didn’t realize who Enbridge was. After a photo shoot with company representatives, his photo was used in an Enbridge print ad displayed across Canada. He came to the Enbridge AGM yesterday as part of a delegation which included his chief, Chief Na’Moks of the Tsayu Clan of the Wet’suwet’en.

Chief Na’Moks read out a letter which said that he and other Wet’suwet’en chiefs have banned “all pipelines” from their territory. Wet’suwet’en territory is being threatened by numerous pipelines including the Enbridge Northern Gateway pipeline, the Pacific Trails fracking pipeline, and a Spectra pipeline. Several years ago, members of the Wet’suwet’en presented Enbridge with an eagle feather, which in Wet’suwet’en traditional law is the first and final warning of trespass. The Chief asked Al Monaco if Enbridge would respect Wet’suwet’en law.

Monaco failed to respond directly to the yes-or-no question. While our delegation knows that if Enbridge had any regard for Indigenous laws, then they would have scrapped their Northern Gateway project long ago. Unfortunately, his response may have convinced shareholders in the room that Enbridge is being socially responsible.

And Monaco continued to refer to Enbridge’s social responsibility, highlighting how the company likes to be actively engaged in communities. I choose to refer to this as Enbridge’s propaganda. I recognize that I may have a very clear bias, but it is only because I see Enbridge spending hundreds of dollars on ad campaigns instead of spending money on actually acting responsibly.

On Monday the CBC reported that “the biggest oil and gas pipeline company in Canada is breaking National Energy Board safety rules at 117 of its 125 pump stations across the country…On top of that, Enbridge disclosed that 83 of its pump stations were missing emergency shut-down buttons.” The National Energy Board (NEB) has known about these inadequate pumping stations since 2011, and yet after 2 years the problem is still not fixed.

Do Enbridge shareholders know that this is how the company’s profits are being distributed? That the company is trying to buy support while being completely negligent? Or that the company would rather spend money on advertisements than complying with safety standards? No matter how you frame it, Enbridge is not behaving responsibly.

When I walked into the AGM, I was closely followed by Enbridge staff who were escorting me to…well, everywhere. There were at least two staff who were pointing me to the registration table, to get a glass of water from the beverage station, to the bathroom, and to check my bag. Every time I turned around, I hit an Enbridge employee. I eventually stopped saying sorry. Other members of the delegation had similar experiences.

I didn’t see many other shareholders or proxy shareholders have the same experience as our delegation. My bag was checked by an Enbridge employee saying “No banners? No paint? Anything that would embarrass us?”

I rolled my eyes. I knew I forgot something!

Regardless of what I may have forgotten to pack, if they are worried about being embarrassed, they shouldn’t look in my bag. They should look at their spill record which averages out to over one spill a week between 1999 and 2000, and they should stop building pipelines that they can’t properly maintain. Or they could look at their recently reported safety violations, and make plans to comply.

But it is Enbridge, so my expectations are pretty low. 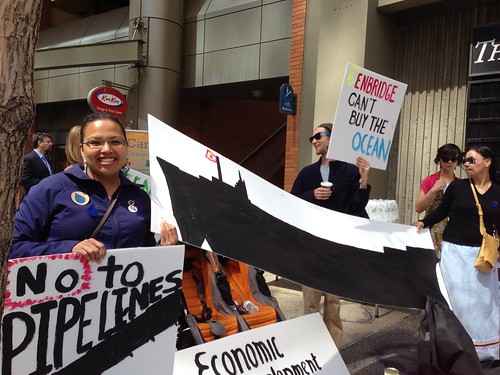 Outside the hearings, local activists set up a table and gave out cans of salmon and coffee to shareholders entering the meeting. A pipeline spill would devastate local waterways and salmon spawning grounds, which was the message of two members of our delegation who were not even allowed into the AGM. Enbridge said they had no record of the two proxy shareholders who had registered.

One of them was Luanne Roth, the Marine Director of the Prince Rupert Environmental Society. She is also a resident and commercial fisher, having a special knowledge of the magnitude and value of wild salmon and groundfish in the area where tankers are proposed. 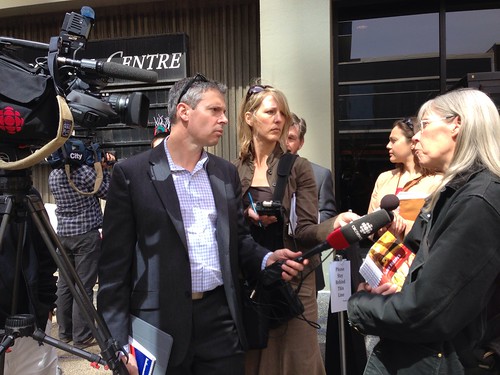 Another proxy shareholder who was not allowed in was Kandace Kerr, who lives in Fort St. James, 800 metres from a proposed pump station. For the past two years, Kandace has been active as an intervener in the Joint Review Panel. Being an intervener in the JRP process is a resource-intensive process, both in time and money. She heads to final arguments soon.

Luanne and Kandace, both of whom travelled about ten hours to get to Calgary, stayed with the rally outside the AGM.

There is mounting opposition to Enbridge’s plan of exporting natural resources, and we were there to tell shareholders that we aren’t going away and that we will not let them profit at the expense of communities.

For photos of the AGM, visit our flickr site: http://www.flickr.com/photos/councilofcanadians/