White-centred climate activism blows the whistle in fear of what the future might hold. Indigenous-centred activism maintains that the present is not safe and it is the present we must attend to.

Whatever you think is happening at Ada’itsx Fairy Creek, you don’t have the full story.

Sunday night was my fifth time arriving at camp. For my first two visits I rolled up to headquarters at the base of Granite Main to find a warm, welcoming community like I’d never experienced before. The third time I arrived at Fairy Creek was after headquarters fell. It wasn’t the same, pulling up to the new meeting spot, R&R (a place previously created for rest and relaxation), where I experienced a drastically different energy. It was four days after the police raided headquarters and people were exhausted, fearful that everything would be lost in the coming days.

It’s been three weeks since the RCMP raided Fairy Creek headquarters at Ada’itsx, unceded Pacheedaht and Dididaht territory, and land defenders and protestors are still holding the line. It has been touch and go since that raid on August 9 — the one year anniversary of the blockade — with wins and losses for the forest defenders and RCMP in equal measure. The game of cat and mouse, of community blocking industry, carries on.

It’s another world out here. Closer to a video game than any semblance of regular reality. There are rules, directives, and consequences — punishments and penalties — and the players know their roles. My first night here, around 9:30 p.m., as I ran up a gravel road and scrambled into the brush to hide from the cops, adrenaline pumped through my body and exhilaration overtook the fear. I figured worst case scenario I’d be arrested, maybe roughed up a little. But I had my camera with me and was on the mission with two white, blonde friends. I knew our privilege would protect us.

When I left camp the last time to spend the weekend in Victoria uploading footage, River Camp had fallen and Camp Landback, the last blockade on Granite Main, was hanging by a thread. I kept hearing reports that all was lost. But when I returned I was told that defenders had pushed the front line over two kilometres down the road — where they continue to hold the line as I write this. I almost didn’t believe they could have pushed back so far after all was almost lost, but that’s life on the front lines: constant change. One day out here often feels like many lifetimes. Everyone reading this will have a different picture in their head of what’s happening here. Indeed, there are infinite angles and complexities at play. With so many narratives unfolding at the same time, it can be hard to know where to focus, but the overarching public narrative is clear: save the trees.

This isn’t about the trees anymore. Maybe it never was.

On Thursday August 19th, I hiked up to River Camp via a back trail. I arrived around 12:30 a.m. to a bustling scene. Everywhere people were in a hurry: packing up the kitchen, building hard blocks, planning a “blob” mission to push the front line down. I slept in fits and bursts, waking up around 6:00 a.m. to yells of “green guys” or ERTs (RCMP Emergency Response Team) entering the camp. The yells were a false alarm but that didn’t ease the tension in the air.

Enforcement began early that day. The blob (a circular, 20+ human formation designed so police can’t extract protestors) had successfully implemented one hard block near Camp Red Dress but the RCMP were in a hurry to move the line, promising protesters that today was the day they would push through and destroy River Camp.

The first instance of mass police violence began around 9:00 a.m. As the police began to move protestors and media away from hard blocks at the mouth of the road — where two defenders were locked in, one strung up in a hammock and the other above in a tripod — officers began to physically push people as they walked. (Tripods are hard block structures built out of three logs balanced against each other with a protestor sitting on top — like the one pictured below). 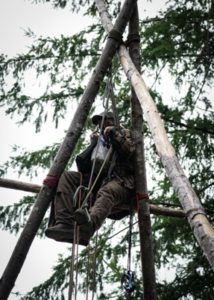 A protestor sits atop a tripod. Image: provided by Kelly Tatham.

What happened next was aggression and enforcement like I had never witnessed before.

The altercation started after the police pushed protestors underneath the second tripod on the road. The walkway underneath the tripod was narrow, slowing protestors down and visibly aggravating the police. Shouts that the structure was unstable came from protestors as RCMP officers attempted to hurry them through. As the group cleared the tripod, land defenders and protestors decided to sit down in a line; a common tactic used when the RCMP attempts to create an exclusion zone so far from the hard block extractions that media and defenders can’t witness what’s going on.

As soon as the forest defenders sat on the ground, RCMP began pulling people out of the crowd, pushing them to the ground, and binding their hands with zip ties. Defenders sobbed and cried out as RCMP officers pushed bodies and faces into the gravel, pinned down legs and arms, and twisted wrists.

During this altercation they singled out an Afro-Indigenous land defender named Strawberry. After the RCMP ripped her away from the friend she was clinging onto, pinned her down, and zip tied her, officers were shouting at one another: “take her right now” and “she’s first.” I spoke with Strawberry after and she told me that they target her every time she’s on the front line and that after they carried her out of sight, they dropped her feet and dragged them along the gravel until her shoes came off.

In hindsight, perhaps the most alarming thing about the whole situation was how normalized the violence was. As arrests continued, as Strawberry was carried away, protestors began to sing.

Those singing couldn’t help their friends. If they reached out, tried to hold their friends or bring them back to safety, they too would be attacked and arrested. So instead they sat, sang, and cried out. A similar altercation would happen that afternoon with even more vicious and targeted violence against Indigenous and Black individuals. Witnessing one or two RCMP officers pin down a white person while four officers pinned down a Black person was beyond disturbing to witness.

Even in a culture saturated by violence, in the news and on every screen, you can’t know how you’ll react until you see it unfolding in front of you. I have not been ignorant to how law enforcement disproportionately treats BIPOC people with violence, but seeing it firsthand changed how I perceive the Fairy Creek blockades.

What it has unravelled in me since then is an embodied understanding of how some people never leave the front lines — and how this — not the trees — needs to be the centre of the narrative and public dialogue. Because this isn’t about the trees anymore. Maybe it never was.

White-centred climate activism blows the whistle in fear of what the future might hold. Indigenous-centred activism maintains that the present is not safe and it is the present that must be attended to. Nothing I am saying is new or anything that hasn’t been said by Indigenous, Black, and racialized people an infinite number of times, but until this conversation becomes the centre of the dialogue around Fairy Creek, we all must continue saying it. As a white, cis, able-bodied person I am safe in society (or as safe as you can be as a woman living under patriarchal, colonial rule). When I leave Fairy Creek, I leave the front line. But Indigenous, Black, trans, and other peoples who are preyed upon by the white supremacist system do not share this privilege. Perhaps that is why they are the ones constantly holding down the front line, despite the repeated violence against their bodies. There is no safe society for them to return to.

As white environmentalists continue to centre themselves in the narrative, the RCMP continues to target, snatch and brutalize BIPOC land defenders. As white people cry for the trees, BIPOC people get hurt. As protesters plead with RCMP officers to “think of your children,” discoveries of more Indigenous children, murdered by the state, get ignored. When are we going to zoom out? When are we going to have a conversation about the RCMP’s jurisdiction? How long will we continue to play within the colonial rulebook?

Whatever you think is happening at Ada’itsx Fairy Creek, you don’t have the full story. Out here is a vast, opaque microcosm where infinite narratives intersect. And if we want real change, it’s time for the human cost of defending the trees to be put front and centre.

Kelly Tatham is a storyteller and documentarian dedicated to creating a kinder, more equitable world. Her work has appeared in film festivals across North America, VICE, The Hollywood Reporter, The Tyee, and day after day on Instagram where she reports from the front lines.

Kelly Tatham is a storyteller and documentarian dedicated to creating a kinder, more equitable world. Her work has appeared in film festivals across North America, VICE, The Hollywood Reporter,... More by Kelly Tatham