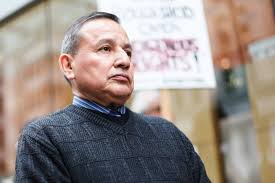 A media release just issued by the Union of BC Indian Chiefs, the Hupacasath First Nation, leadnow.ca, and the Council of Canadians states, “The Union of BC Indian Chiefs is working with other First Nations and organizations who are deeply concerned that the Harper Government may take steps to enter into the (Canada-China Foreign Investment Promotion and Protection Agreement) without fulfilling its constitutionally-enshrined and judicially-recognized obligation to consult with First Nations.”

Grand Chief Stewart Phillip, the President of the UBCIC, states, “Any further effort (by the Harper government) to ratify this agreement will adversely impact our inherent rights and territories forcing First Nations to take immediate legal action.” And Brenda Sayers, Councillor of the Hupacasath First Nation, says, “First Nations expect the (Harper) government to inform First Nations immediately if they take the position that they are not required to consult with First Nations prior to the final steps that will bring the FIPPA into force so that we can seek the assistance of the Court.”

Brent Patterson is a political activist, writer and the executive director of Peace Brigades International-Canada. He lives in Ottawa on the traditional, unceded and unsurrendered territories of the Algonquin... More by Brent Patterson

U of T workers’ fight against precarity