Many people are confused by two terms that sound similar but have very different meaning. “Individual rights” is very much in keeping with civil society, while “individualism” works to undermine it.

Over the years I have been in many discussions that indicate some confusion around two concepts that are vastly different in important ways. These two concepts are individual rights and individualism. Yes, they do sound similar, but from an ideological standpoint they are light years apart. In the current era of neoliberalism and corporate power, the first discourse seems to be in retreat while the other thrives.

Individual rights are an important component of civil society. Individualism, on the other hand, especially the rugged individualism symbolized by America’s tough, rough and gruff Marlboro Man,* has very little civility in it at all. The former refers mostly to an increasing inclusivity on social issues, while the latter means that significant numbers of people are to be economically excluded.

It is time to set the record straight and unpack the terms individual rights and individualism. Canadians (and Americans) need to understand these terms and their political effects. After all, civil society depends on a citizenry with a deep understanding of what these terms mean.

Individual rights emanated out of the French Revolution and the Enlightenment. Once King Louis XVI and his wife Marie Antoinette were beheaded and the subsequent turmoil subsided, the people began to realize that they were no longer subjects of the King, but were in fact citizens of France. And with this change in status came rights for the individual, at least for white males. 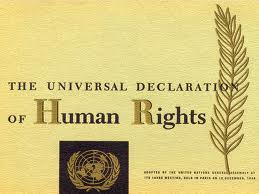 The 20th century is considered to be the Century of Human Rights. This dynamic reached its zenith in 1948 with the UN’s Universal Declaration of Human Rights. Discrimination against an individual based on identity markers such as race, culture, class, gender, religion, and nationality was strongly discouraged. Many western nations followed the UN’s lead by getting rid of racist legislation. (aka, institutionalized racism). For example, in 1951 the Canadian federal government amended the Indian Act to allow First Nations people to once again practice their traditional cultural ceremonies such as the Powwow, the Sundance, the sweat lodge and the potlatch. (They had been outlawed in 1881, although many First Nations still practiced them.)

Racism still existed after the removal of these laws, of course, mostly in the form of racist attitudes or systemic racism. But at least getting rid of racist laws was a major first step! And yes, today many western nations are in the process of including the rights of gays and lesbians into their body politic. These are human rights, not special rights as many conservatives would have us believe.

In recent decades, many of these rights have been taken away. The so called War on Terror has led to the frequent use of torture and the loss of habeus corpus for many young Muslim men. Others never really came to fruition.

We must reverse this trend. Individual rights is an important aspect of a socially just and civil society. For the most part, they are attempts to make society more inclusive, especially regarding social issues.

So what does individualism refer to?

In the context of the United States, the rugged individual discourse hints at the self-made man (or woman), one who has been able to pull themselves up by the bootstraps and make their own way. In the past few decades, individualism has been framed within Ayn Rand’s economic philosophy, called libertarianism. In simple terms, libertarians believe that no one should expect help from them, and in turn, they should not expect any help from others. It should not be too difficult to see that such a philosophy supports tax cuts for the wealthy (and for everyone else), as well as the end of social programs and the entire social welfare state. Advocates of Keynesian economics know that libertarianism is the antithesis of civil society. Similarly, the economic paradigm known as neoliberalism (aka, the corporate agenda) relies to a large extent on the acceptance of the rugged individual discourse for its own success.

During last year’s Presidential election, the Republicans nominated a self-claimed libertarian to be Vice President of their country. Paul Ryan is a proud devotee of Ayn Rand’s libertarianism. But it is important to note that this is only in the economic realm. On social issues, Ryan is far from being a live-and-let-live libertarian. He is very supportive of government intervention on social issues like gay marriage and access to abortion. In this respect he is not a libertarian; nor is he fully cognizant of what the atheist Ayn Rand was truly calling for. The same could be said about the entire U.S.-based Tea Party.

But let’s get back to the effects of individualism on American society for a moment. A fairly recent example took place in Arizona in 2010. Republican Governor Jan Brewer signed into law the end of multicultural education. Brewer was backing the claims of Superintendent John Hupperthal that the Tucson Unified School District’s Mexican American Studies Program was promoting resentment of non-white students toward white people. These conservative Arizona politicians went even further when they stated that students need to understand that everyone is an individual who can make their own way through life. All multicultural education soon came to a halt in that state. School libraries were forced to remove books like Paulo Freire’s Pedagogy of the Oppressed and even Shakespeare’s The Tempest.

The acceptance of individualism as an underpinning of American society is enabling the corporate agenda to become even more entrenched than it already is. Taken in the way that Arizona has used it, individualism is at odds with individual rights. But put in its rightful place as an economic entity, the discourse of rugged individualism is being used as a smokescreen for an even more nefarious purpose, namely, to promote the notion that those who have a lot should not have to hold out a helping hand to those who have nothing.

Of course, all people are individuals, but they are also members of social groups. These social groups have unequal status in our society, as well as unequal access to resources. A civil society would work toward rectifying these inbalances.

In sum, a civil society supports the expansion of individual rights. At the same time, it discourages rugged individualism as an ethos for its citizens to live by. Citizens can enact agency on this front by voting in governments committed to a set of individual rights that includes, among laudable progressive positions on social issues, the right to a life of dignity from an economic standpoint.

* Note: The Marlboro Man was one of the most successful advertising campaigns ever. Promoting the idea that “rugged individual self-made men” choose to smoke Marlboro cigarettes, its run was during the 1960s and 1970s.