If you’ve been following the UN Climate Change Conference, you’ve no doubt heard that any rise in global temperatures, sea levels or deforestation is due to whores selling sex to UN delegates. What?!

If you’ve been following the sex work-y blogs, you’ll no doubt already be well informed that any rise in global temperatures, sea levels, acid rain or general climate meltdown is wholly due to big bad whores selling sex to UN delegates in Scandanavia. What??

Well, really, it’s gotten so silly. Everyone is so desperate to tie together every hot button issue that excites them (The Olympics lead to trafficking! Trafficking leads to climate change! Climate change is due to Tiger Woods’ infidelity!) that you can’t blame the average person for not knowing what to think.

“Sex workers in Denmark are protesting a campaign against prostitution during the UN Climate Change Conference. The city of Copenhagen wants to discourage delegates from buying sex, despite the fact that it is perfectly legal there and has nothing to do with climate change. The sex workers’ interest group, SIO (Sexarbejdernes Interesseorganisation), was not consulted and so, annoyed, they are offering free sex to any conference delegate who turns in his ridiculous postcard (see below), which also went to 160 hotels.” 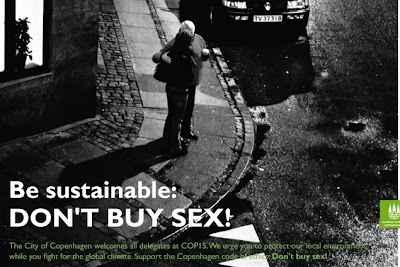 You can listen to Susanne Møller’s answer online here (or download the short mp3 here).

But I kind of suspect that no one much is listening to those sorts of arguments anyway. These days it seems like trafficking is just too titillating and edgy for any of us to see it for what it really is: a serious issue worthy of real attention, but one which affects only a small minority of migrant labourers, some of whom work in the sex industries, many of whom do not.

Last month I met up with an old school friend I hadn’t seen for a decade or so. Catching up on our lives, including the work we do, the topic of sex work came up. Probably to keep the conversation going, my friend said, “Oh sex work, interesting. A friend of mine works at a support centre for trafficked women.” Unwittingly, she had succinctly spelled out an association I think many people carry around in their heads: “Sex work equals trafficking and trafficking equals sex work”.

But rather than undoing this spurious association, we’re forging full steam ahead, tying in even stranger bedfellows – like climate change and the Olympics – as we go. Pausing to collect evidence, to verify our claims, to ask trafficked workers what they want or to ask non-trafficked workers how erroneous assumptions affect their working lives would only slow down the fascinating, freakshow fun.

Which, for many of us, is the least sustainable notion of all.

December 17th is the International Day to End Violence Against Sex Workers.

Nico Little updates his personal blog regularly. You can follow it at www.ickaprick.com

Nico Little is an Anglo-Albertan who decamped to Montreal sometime in the late nineties “to learn French and be gay.” He then moved to Ottawa, Ontario, where he worked as an HIV outreach... More by Nico Little