Seven youth took part in a historic march across the country to raise awareness of Aboriginal issues and challenge Canada to listen to Aboriginal voices.

For most of us, a kilometre is a decent distance to walk to just buy groceries. For Leo Baskatawang, four thousand and four hundred kilometres was worth it to go to seek justice for Aboriginal Peoples in Canada.

Leo, a 32-year-old Masters student, decided earlier this year that something needed to be done. He had watched the coverage of the Crown-First Nations summit in January, and realized that the government was giving short-shrift to Aboriginal issues. “That was the last straw,” he said of the summit. 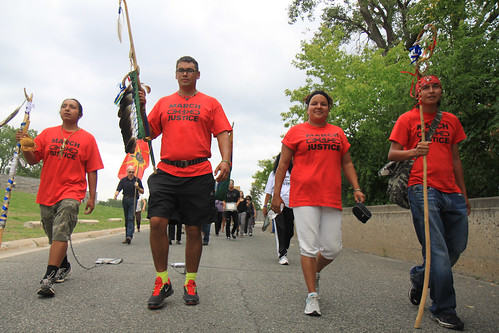 Marchers set off from Victoria Island to Parliamant Hill after a brief ceremony.

Instead, the young man decided that everyday Canadians needed to be aware of Native issues, and he would walk as far as necessary to be part of raising that awareness. An idea was born. The March 4 Justice began April 23rd, in Vancouver, and concluded 135 days later, 4,400 km walked, in Ottawa on September 4th. 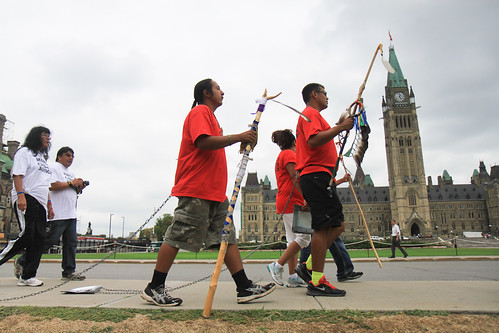 The marchers arrive at Parliament Hill, with copies of the Indian Act chained to them.

The whole time, Leo and others carried copies of the Indian Act behind them on chains, a protest against the archaic legislation’s continuing impacts on Aboriginal Peoples today. Organizers were calling for the repeal of the act, as well as proper Aboriginal government representation, similar to what was outlined in the 1996 Royal Commission on Aboriginal Peoples’ report.

“We’re hoping for public officials to support the need for a televised public debate on the issues,” said Leo. “I’m hoping that once the public is aware of our issues, we can swing the momentum in this country.” 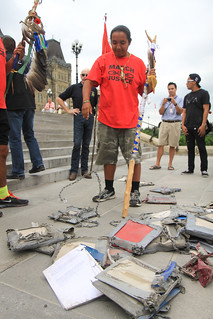 A ceremonial casting-off of the chains of the Indian Act on Parliament Hill.

Along the way, Leo was joined by a number of supporters. Seven young people in total joined the march, with one young woman having to return home earlier because of school.
“It’s been a real journey,” noted Stephanie MacLaurin, from Fort Williams First Nation, near Thunder Bay, who was one of the fellow marchers. “I’m sad to see it end, but its something that needs to be done yearly. I hope to do it again, even though my life has been on hold the last month.”

Much of the organizing and support came from social media sites like Facebook and Twitter, and people who had found out about the march online often came out to support the walkers in person. “Facebook really connected people – we got most of our support there,” Leo acknowledged. 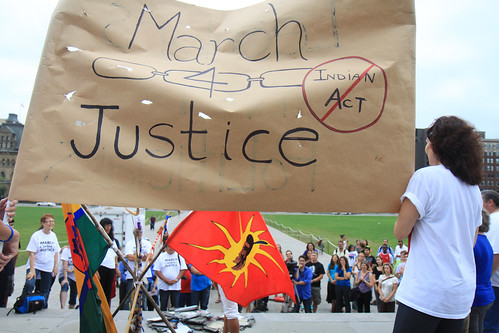 Many of the supporters of the March 4 Justice across the country found out about the event through social media.

In Ottawa, for the conclusion of the walk, about 60 supporters came out to Parliament Hill after a ceremony at nearby Victoria Island, a longtime gathering place for the Algonquin people. A number of speakers from political parties and the Assembly of First Nations (AFN) came out to express their support as well.

Representatives of Liberal Party leader Bob Rae and New Democratic Party Aboriginal Affairs Critic Jean Crowder made statements to the crowd. A representative of AFN National Chief Shawn Atleo also came out to speak in support of the march. Conservative MP Rob Clarke, himself Aboriginal, spoke of his support for the marchers, and his support for the overhaul of the Indian Act. 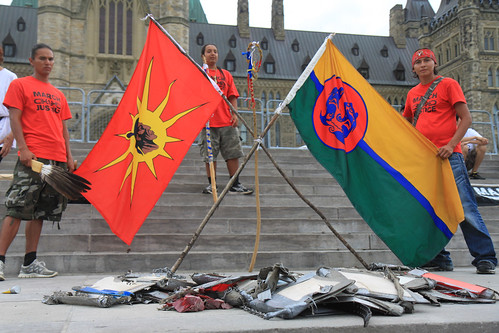 The unity flag and the community flag from Osnaburgh (Mishkeegogamang First Nation).

Clarke currently has a private member’s bill before Parliament that could see the Indian Act replaced. The bill has been heavily criticized by Aboriginal leaders, partly because he didn’t consult First Nations, who are concerned that it could empower the government to replace the Indian Act unilaterally, and result in funding cuts or other changes.

Laura Gagnon recently moved to Ottawa from Thunder Bay and had heard of the March 4 Justice online, and came out to support the group. “Today is really important because Native people have become non-individualized, put into categories. We have to raise awareness and stop prejudices. As Natives, we’re powerful when we come together, and we’re just going to get stronger.” 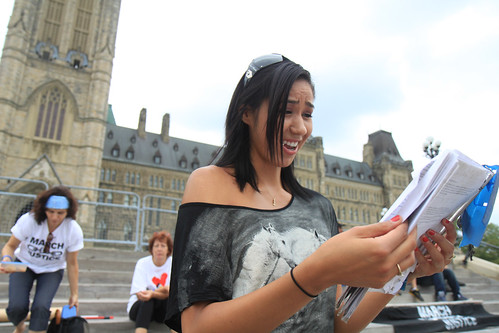 Laura Gagnon looks at a tattered copy of the Indian Act dragged across the country.

Summarizing the day, but also the feeling from marching the past few months, Leo told the assembled crowd, “I’ve learned that change isn’t easy. We have to be willing to go for it, to do something for it. We recognized the need for change, and we want others to get up and act.” 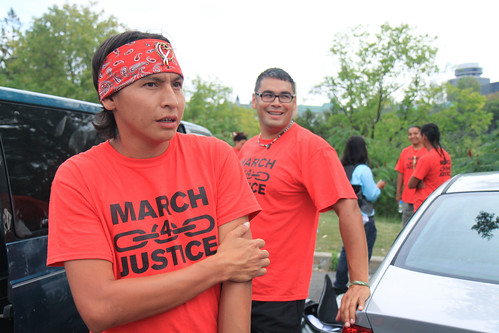